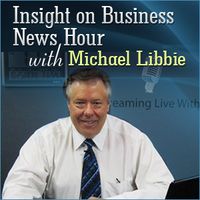 our advertising agency Insight Advertising, Marketing & Communications and can be seen LIVE at 8:45 Monday Mornings at Webcast One Live or right back here on your time. Made possible by our friends at FUIRSA - "Tax and Accounting Professionals who work hard for you until the cows come home". We monitor our agency Twitter Feed @InsightADV before during and after the show and here is our agency Facebook Page...just in case.  This week:

Our special guest this week is Lynn Hicks the business editor of the Des Moines Register.  We'll talk about the historic move the Register made last week to new offices, what he looks for in business stories, what changes he's seen with regard to the Des Moines Metro and a host of other issues.  Lynn Hicks live with us at 9:15.

Last week West Des Moines announced Microsoft will be guilding a milti-million dollar data farm in their city.  The project was given $20 million in tax credits by the state to provide 30 jobs.  We don't do politics here but this is an interesting story about how already successful companies use tax dollars to expand.  Is it "Corporate Welfare"?   We'll talk about it.

Several years ago American Express listed Iowa as having the worst record in the nation for support of women owned businesses.  Iowa is last, dead last.  Last week the Iowa Economic Development Authority announced a $50,000 project awarded to a Cedar Rapids company Ascent to look at ways Iowa can do better.  What might be some suggestions?  We'll share.

What happens when companies put together a well scripted and designed video that explains what it is they do?  In this story we'll look at how one company boosted their on-line conversion rate by 20%.  Video as a corporate investment.

My friend Mike Wagner tells the tale of the three reasons a business fails. We'll visit about that in detail and ask how many of you might want to go into business selling...sails.  Hey, it could make a comeback.

Beginning on June 27 folks who access The New York Times will be allowed to view only three articles each day.  It's the continuing attempt by the newspaper to boost revenue in the "pay to view" world of on-line reading.  Will it work or will users just go away?  We'll share some thoughts.

Those stories and some words about using Facebook Photos of bikini clad college students and the $2 million dollar lawsuit filed against a public school district in Georgia.

Insight on Business - The News Hour with Michael Libbie - Thanks for coming by!