And, Happy Chanukah! Today is the seventh day of the eight-day festival which, by the way, is more historical than biblical. Chanukah is 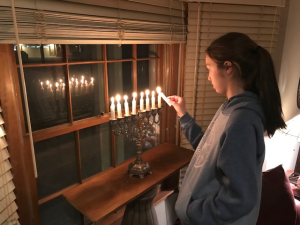 not mentioned in the Torah nor is it in the Jewish Scriptures. However Maccabees I and II can be found in the writings of other faith traditions. How could that be? There are many opinions but the most logical is the decision was...political. The rabbis who created the "Jewish Bible" did so soon after the fall of Jerusalem and the Second Temple to the Romans. It may have been considered poor politics to tell the story of a Jewish victory over a mighty empire in those times. Here is an excellent article about that from My Jewish Learning. Happy Chanukah!

Add yet another mass murder to the ever growing list of gun violence in the United States. Now we have a fifteen-year-old who called out for help with his mental struggles and the parents go buy a gun...on Black Friday. Oakland County Prosecutor Karen McDonald alleged during a press 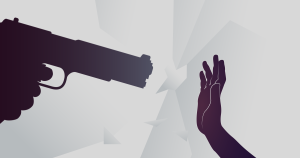 conference on Friday that the 15-yar-old shooting suspect was with his father when the 9mm Sig Sauer SP 2022 pistol was purchased. The same gun was used in the murders. Later McDonald said the teen's mother mentioned the gun was a gift on social media.

The parents, along with the shooter, are in jail on a host of charges. McDonald said "These charges are intended to hold the individuals who contributed to this tragedy accountable, and also send a message. Gun owners have a responsibility. When they fail to uphold that responsibility, there are serious and criminal consequences."

Four children lost their lives in Oakland County last week...four kids that went to school and never came back home. Apparently you have not had enough yet. 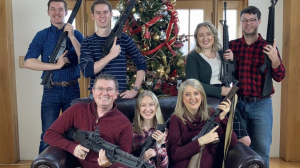 Nothing says "Merry Christmas" more than a congressman showing off the family arsenal with a message, "Santa, please bring ammo." That is what Thomas Massey (R-KY) decided to put out on Twitter days after the Oakland County murder. The word "clueless" just isn't strong enough. This is the same guy who not long ago compared vaccine mandates to the Holocaust and following the mass murder in Las Vegas in 2017 supported "bump stocks" even as the NRA warmed to the idea about a federal investigation. And this is the sort of person Republicans not only support but encourage. Had enough yet? 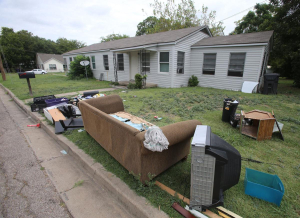 and renters make their payments. According to an article in the Des Moines Register less than 1% of Iowa households have received assistance. Maybe it's because nobody has asked for the funds? That's the line Iowa Finance Authority spokesperson Ashley Jared suggested last week. She told the Register the agency has not "experienced a high demand for our large allocation of funds". Oh but wait...non-profit organizations from every corner of the state report a "steady demand for the assistance". Now there is speculation that Iowa will have to return the cash to the feds. Debi Durham the Director of the Iowa Finance Authority, in August, blamed the slow roll out on the feds and a New York company that was paid $880,000 to produce software...that apparently doesn't work.

The Clown Car that is the State Government under GOP control continues to rumble forward. Had enough yet? 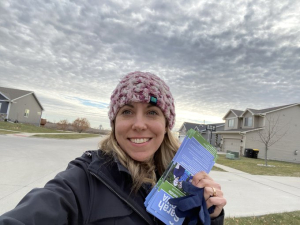 Less than a week after announcing she is moving to Dallas County to take on the president of the Iowa Senate, Sen. Sarah Trone-Garriott (D-Windsor Heights) was knocking doors in Adel yesterday. That was after she volunteered in Windsor Heights for something called Windsor Wonderland a day with Santa, free photos, reindeer, cookies and hot chocolate.

Look people...this is an important race and you can help.  Sarah told me yesterday that she soon will be organizing events in the new Senate District 14 to put that seat into the control of the Democrats. You can head to her website and join with me in making a donation to this effort. Every donation helps. Even if you are outside of the district your help is needed here.  Thank you...in advance!

This week I've got several meetings arranged as I get ready to serve as a councilor for the City of Windsor Heights. It's sort of like drinking from a firehose. Just in the past couple of days I've received lots of "late night reading" in the form of budgets, development guidelines, meeting notes and more. I'm truly looking forward to making a difference for folks that live here, work here and shop here.  Thank you for the opportunity.

Tonight we'll light the 8th candle for Chanukah and, I'm told, we'll be eating our fill of latkes. They go well with applesauce or sour cream or raspberry jelly or just salt and pepper.

Had a great time yesterday during Windsor Wonderland. I joined Georgie and Jovie at the event where hundreds of folks came to the Windsor Heights Hy-Vee to eat, drink and be merry. Also joining us and working the Cookie Decorating Table was Rep. Jennifer Konfrst (D-Windsor Heights) and the minority leader in the House.  A position we hope to change to Majority Leader next election. Finally, the celebration is coordinated by Windsor Heights City Councilor Therese Harms and was another success to add to her many contributions to our community. Good times in The Village.

Thanks for reading and Happy Chanukah