Keeping Iowa First in the Nation

first in the nation come 2024. Here is a non-political conversation about why Iowa should remain first in the nation coming from four individuals deeply involved in the effort. You'll hear from Scott Brennan from the Democratic National Committee, Joseph Jones from The Harkin Institute, Scott Raecker from the Robert D. and Billie Ray Center and Jay Byers from the Greater Des Moines Partnership the fourth largest chamber in the nation.  We think you'll find this not only informative but also...fun.

Here is Part Two of our discussion about keeping the Iowa caucus first in the nation. We open 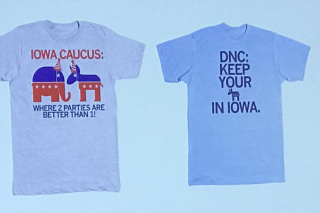 up this segment with Jay Byers the President/CEO of the Greater Des Moines Partnership offering up ten well thought out, and sometimes fun. reasons for the Democratic National Committee to #KeepIowaFirst. You'll also hear from Joseph Jones from The Harkin Institute, Scott Raecker from the Robert D. and Billie Ray Center and Scott Brennan from the Democratic National Committee. You'll also hear about the shirts you see here and some comments about both styles.

Thanks for coming by!

The award winning Insight on Business the News Hour with Michael Libbie is the only weekday business news podcast in the Midwest. The national, regional and some local business news along with long-form business interviews can be heard Monday - Friday. You can subscribe on PlayerFM, Podbean, iTunes, Spotify, Stitcher or TuneIn Radio. And you can catch The Business News Hour Week in Review each Sunday Noon on News/Talk 1540 KXEL. The Business News Hour is a production of Insight Advertising, Marketing & Communications. You can follow us on Twitter @IoB_NewsHour.