Sunday Morning, a great time to sit back and visit about some of the stuff that goes

on in our lives.  The big things...and some not so large.  This is Sunday Morning Coffee, a visit between friends that's been part of our conversation for years.  New format, new address and new...ideas. (We thought it was time for hope and change.)  We'll get back to business tomorrow.  But for now...grab a cup!

Sorry, You're Not Welcome in Iowa

Months ago we told you it would happen.  We said the Iowa Republican Party, now dominated by ultra right-wing Christians with a clear social and economic agenda, would not welcome those who do not swear loyalty to their particular world order.  The chickens are coming home to roost.  Last week three GOP presidential hopefuls bowed out of this summer's Iowa Republican Straw Poll.  Front runner Mitt Romney, gone.  Former Utah governor John Huntsman didn't even bother...he simply flew over.  Newt Gingrich, once the brightest star in the party...abandoned by his staff.  What's going on?  None of them would stand a chance at the upcoming "Tent Revival" formally known as the Straw Poll.  And, it's not just us saying that.  Here's a short piece on Iowa from the New York Times.  Told you.  Ya know, it's getting downright wacky out there. 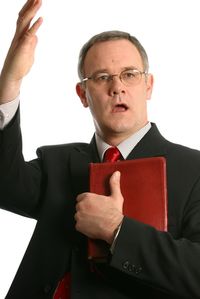 Meanwhile, as if you needed further proof, Texas governor Rick Perry is holding his own revival.  Last week Governor Perry called on all 49 governors to join him in Houston and, "...call upon Jesus to guide us through unprecedented struggles."   Wonder how that sits with Governor Rendell of Pennsylvania, Governor Markell of Delaware or...Terry Branstad of Iowa.  OK, the governor considers himself Catholic (Which, depending on what Evangelical Christian you visit with, might count as a "true believer".)  You see, Governor Branstad's Mother was Jewish...from Latvia yet.  But, even if she did convert to Lutheranism to marry her Norwegian beau, Governor Branstad, and I, wold have been marched off to "the camps" together 70 years ago.  It doesn't matter how much lutefisk and lefse you eat.  Honest...

My Friend Gets A Job!

We had coffee together last Friday but Isaiah McGee wasn't talking shop.  Had I asked, I wonder if he would have told me he was going to be tapped for a job with the Iowa Department of Education?  That's what happened Friday as Iowa Director of Education, Jason Glass, ushered Isaiah into his new office as a "program consultant for achievement gaps and student equity".  (I dunno either...)  I'm happy for Isaiah and thought he got a raw deal when the governor threw him under the bus after the Senate did not confirm him as the director of the Human Rights Department.  Heading into that position is former spokesperson for the Republican Party, Danielle Plogmann.  The governor, in his announcement, called Danielle "loyal" several times.  Loyal to????  Here is the story from my friends at The Bleeding Heartland.  Nice... 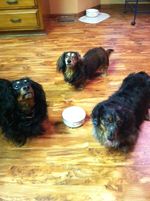 We have three, Harley, Bungie and Koozie.  Three of the wackiest long hair weiner dogs in the nation.  Oh...wait...  I bet you kids were thinking I was going to talk about Congressman Anthony Weiner and his his checking into a treatment center for his...uhm, "issue".  Nope.  The only thing that needs to be said about this is how silly it's becoming.  To see other elected officials calling for him to resign because it's a "distraction" to the political theater going on in DC is...silly.  Meanwhile the congressman's district has been polled and 56% say he should stay on.  And then there are those in the media that point to this as proof of the danger of social media!  We have three words about that...

Yes people have been fired for writing stupid stuff on Facebook.  Yes, folks have gotten into big trouble for posting stupid tweets.  The key word is..."STUPID" not EVIL.  Maybe if we just remind ourselves to act as if Mom is Watching...  Might help?

One more?  It was Mom's 91st birthday this past week and, along with a card, we sent her some flowers from Dunlop's the Art of Flowers in Wolverine, MI.  Mickey did a great job...again.  By the way, Wolverine has a population of about 400 people.  Who says good stuff can't come from small places?  Thanks guys!

Daughter Holly is going to be Mom #3 in about a month.  Creative, like her Mother, this is how she let the family know there was a "surprise" third on the way.  Sailor and Jake are...excited.  Chase (Daddy) is wondering if he can get to Major to pick up the extra pay grade...yikes.  We're proud of them all.  Health and a wonderful life!  See, even a commie, leftist, pinko like me has a real life.  Oh please...don't get me started.

Please, will somebody wake us up after this BIG NEWS STORY!  OK, she's a hottie but what else?  Anybody?  Come on...I'd really like to know the fascination about her.  She shows up looking at a monument and the media goes nuts.  I'm telling you...it's the "hottie" angle.   Don't you just sorta feel like a voyeur?  Nudge me when it's over.  Another NON-STORY....

The Pet Project Midwest is a non-profit that helps keep pets with their families when the family has little money to purchase pet items and might have to make the tough decision to feed the kids...or feed the kids (pets).  Seriously.  For over a year the Pet Project has had a home on Merle Hay Road behind Christopher's Jewelry.  The gold buying business must be hot because Chris is expanding his store and that means the Pet Project needs to find a new home.  They are good tenants (they actually pay the rent, utilities, etc) and it's a good cause.  If you know of a place here in Des Moines....that would be great.

My Bride The Painter... 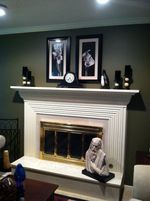 If there is one thing I loathe more than Right-Wing Wacky Republicans it's painting.  Last week, while I was gone visiting Mom, my Bride painted the living room.  (Including the ceiling!)  She loves it which is a very good thing for me.  Thought I'd brag a little about here work and show you what she did.  Trust me, this is good...very good.

My Bride is off on an overnight bike ride down the Raccoon River Valley Trail to Jefferson and back.  I mention this because the project is a favorite of our long time friends Chuck and Carla Offenburger.  Chuck and I go back to the 1980's when he was with the Des Moines Register.  What is significant about this years event is that both Chuck and Carla got to ride the Tour this year.  They have, together, been battling cancer and now are well enough to make the 60 mile trip.  We, and I'm sure you, are pleased and grateful.  Stay well my friends!

Thanks for coming by.  Sorry to change things up on you with a new address but thought it was time to move this rant to a different location other than our business.  Sometimes people get funny about stuff like politics and religion and weiners.  Have a great day and if you want to carry on the conversation leave a comment below, send me an e-mail or let's connect on my personal Facebook Page or Twitter @MichaelLibbie.  - Michael

10-4 on good things coming from small towns, Mr. Micheal (Lawler, IA...population <500)!!!!! Glad to read about the Chuck/Carla recovery. Good stuff. Are you saying that Sarah P. is NOT a Rhodes Scholar?

Hi Bill, I agree. I love reading your book...it's Lawler but it's also every small town. Good stuff... Yes, Chuck and Carla are doing so much better. Sarah? I wonder if she can see "Rhodes" from her porch...? Thanks for reading and for the comment! - Michael