Sunday Morning...that perfect time of the week to sit down and reflect a bit on

Was That The Longest Short Week?

Most of us had last Monday off for the 4th of July observance which left us a four day work week.  I don't know about you but it was tough to get through.  Maybe it was two "parties" on "school nights".  There was the Village of Windsor Heights 4th of July Party & Fireworks with our friends from Faculty Lounge (Here is a video...if you want to experience.) and then on Wednesday our son, Aaron, and I went to see Matisyahu at the Simon Estes Amphitheater downtown. (Here's a video of that experience...son Aaron makes a quick appearance right at the start...and it's a little long at 3:41, sorry.)

I often wonder if folks know where the words for his music comes from...  It truly was a "Jew-Riffic" evening.  Matisyahu didn't hold back and the concert ended about 11PM...on a night when we had to get up early for work ("School Night").  Getting old...

Speaking of Getting Old... 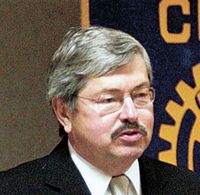 The Governor is wasting no time in targeting...teachers?  Governor "For Life"Terry Branstad last week told the press that the IPERS needs to be overhauled.  The Des Moines Register picked up the story and used the words "teachers retirement"...several times.  But, the Iowa Public Employee Retirement System (IPERS) covers not only teachers but all state employees.  Including the governor who, even though actively engaged in the job of being governor at a salary of $130,000, gets IPERS payments of another $53,000.  Livin' the life...

Too Whom Do The Doves Belong? 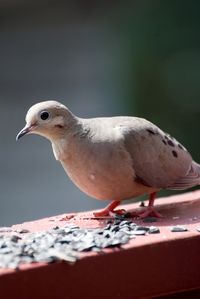 I need to get my BFF State Representive Chris "Still Ain't Got No Newsletter" Hagenow involved in this discussion.  We've got several doves in our yard.  In Iowa a hunter can shoot doves for sport.  But, to do so you've got to get a state dove hunting license.  Think of it as permission from the State of Iowa.  That must mean that Iowa owns these doves that frequent my property.  I also feed birds at several bird feeding stations.  Does that mean I am baiting the doves?  If I shoot the doves, that the state owns, using a BB Gun....is that hunting?  And, if we really wanted to have some sport...why not open up a Sparrow Season?  The Sparrows here outnumber the doves by 20 : 1.  That truly would boost economic development...right?  I'm confused.

Last week the State of Iowa laid off 51 workers and more will soon follow.  I know, many of you think that's a really great idea.  Reduce the size of government...cut services...  OK, I'll join you in that...but the next question is, "How do we replace the lost purchasing power of these folks?" Let's say each makes $40,000 that's $2,080,000 that won't be taxed and nearly $9 million of lost economic development dollars.  Maybe they can get a job in Webster City at the Electrolux Plant...  Oh, wait...that was another 700 jobs that evaporated and headed to Mexico.  Hold on!  There's an idea!  We'll just export unemployed people out of the state and country.  Lower our unemployment exposure, have full employment for those of us who are left...it's brilliant.   I once had the number to the governor's office...wonder if it's changed?

Sandwiched in between the wild parties I called Desmund Adams (Here with Congressman Boswell) who I saw during the Village of Windsor Heights 4th of July Parade.  (I had to ask my friend Cristhiam Ucles, "Hey, who is that guy?")  Desmund is running for the Iowa Senate in the new 22nd District.  So far there is nobody else in the game but it's rumored that Pat Ward may have to sell her big West Des Moines (6,100+ sq. ft) home and move into the district.  Desmund Adams...a face to watch...and we'll help you...watch.

Sunday Morning Coffee is a bit late today because of these great folks:

Michael & Jody Leo just (two weeks ago) moved into their new home in Downtown Des Moines.  They are amazing hosts...and we got home....really, really...late.  Thanks guys!!  Nice Evening. 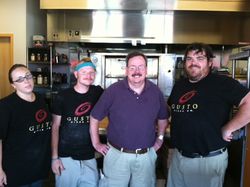 My friend Bill Kurtz sent me a message on Facebook telling me he was coming to town...to make another visit to his doctor.  Bill and I go back...years, and years to the old Jaycee Days in the 1980's.  It was good to see him and we're praying for a full recovery.  Oh...and you need to know:  Bill is no longer a Gusto Pizza Co. virgin!  I think...he liked!

That's it. I am soooo sorry this is soooo late.  Blame the Leo's...and the conversation, wine, music, food...and the "Austrian Fruit Salad" (peach, pear and pine homemade schnapps direct from Oma's Kitchen in Austria.)which is sort of a cross between gasoline and nuclear energy.  Only...sips my friends...only sips.  If you want to connect with a comment here...or we can visit on my personal Facebook Page or...here's Twitter:  @MichaelLibbie - Have a wonderful Sunday!! - Michael