It's a conversation about the things that drive you crazy; religion, politics, gossip

with enough business news & personal family stuff to keep it...sane.  Sunday Morning Coffee is a look back on the week and a peak forward.  Grab a cup and let's see what's been going on...

For the next five days Iowa is going to see temps in the mid-90's with the "heat index" up to 110 in some places.  Heat index...or what it feels like when you combine the temperature with the humidity (right now at 94%!).  That's sort of like "wind chill" during the winter.  Like I need a number.  Dangerous...and some folks will golf today.  Best to stay inside and have some...coffee. 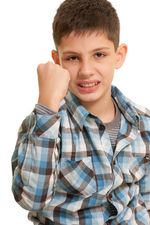 It got a little hot over on Grand Avenue yesterday.  Nearly 500 people marched to Terrace Hill, the mansion where Governor  Terry Branstad and his bride Chris live, demanding that the governor start governing for "the people". The governor wasn't home...he was hanging out in Salt Lake City with Governor Scott Walker (WI) compairing notes.   What these folks don't understand is that Governor Branstad IS governing for "the people"...they just happen to have a bigger wallet or the word "Inc." tacked onto their name.  Here's the story from the Des Moines Register.

Business Made Me Do It...

A.    He was doing a lousy job so it was a performance issue;

C.    The Iowa Association of Business & Industry made me do it;

D.    I'm working for the people of Iowa and Godfrey is bad for business.

Notice how everything is "bad for business"...except that Iowa ranks at the top of the heap when outside non-political folks rank the state.  It's...why folks march around in the heat on Grand Avenue.... Here is that story from our friends at Bleeding Heartland.  Meanwhile, I was visiting with some folks from Des Moines University who are also perplexed about some of this.  "When he was here he did a great job but was known for hiring good people and letting them call the shots."  Which makes "C" sound more like the correct answer. 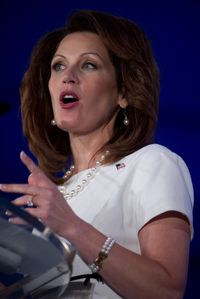 Or must be because I see her...everyday.  Seriously, if it's not in person it's her bus.  She is camped out in Central Iowa waiting to be crowned the winner of the GOP Iowa Straw Poll on August 13th and polls show that she is the "darling" of the race.  Meanwhile it's said that Governor Rick Perry is feeling "called" to run for president.  No doubt he got that call directly from...you know who...up there...the "Big Guy"...well, the son of the "Big Guy"...or the "Big Guy" that is all three of something.  Never mind...it's complicated. (Photo: Christopher Halloran / Shutterstock.com)

Last week in a Letter to the Editor of the Des Moines Register Jake Blitsch, a counselor with the American Legion Boys State Program wrote about an unfortunate event that happened at the Iowa Gold Star Museum, located at the headquarters of the Iowa National Guard.  The short story is that when Mr. Blitsch asked why there was not a photo of President Obama at the museum a volunteer

named "Phil" said it was because the president never served in the military.  Mr. Blitsch countered with, "Perhaps but he is now the Commander in Chief of the Military."  To which "Phil" countered, "He may be your Commander in Chief but he's not ours."  I called Master Sergeant Duff McFadden from the Iowa National Guard Public Affairs Office and Col. Gregory Hapgood did call us back. Thank you sir. The museum did post the president's photo...later in the week.  According to Col. Gregory Hapgood, "It was the right thing to do."  We agree...and it points out the fact that your business brand is not always under your...control.  People get involved.  Here is the follow up story from the Des Moines Register.

Came home last week and Lucy Belle is doing...really well.  So is Mom and Dad that now have three beautiful, healthy children.  I'm told they are all settling into a new routine.  Sometimes ya sit back and thank G-d for the wonders of life...and family. 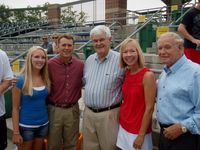 I was really happy to see this photo of former Iowa Governor Robert Ray, whom I admire and like, hanging out at Principal Park with Newt during a recent event pulled off by State Senator Scott Raecker (R-Urbandale).  I was happy for two reasons: 1)  It's good to see Governor Ray out and having a great time; 2) I'm glad that Scott hasn't thrown a great public servant like the governor under the Tea Party Express Bus.  Some would suggest that he's a RINO.  Sad, what has happened to the party.  Meanwhile...Newt has some finance issues.  The recent report puts his campaign over a million dollars...in debt.

And The Winner Is...

This past Friday the Urbandale Hy-Vee held the "Thrilla at the Grilla" to raise some funds for the Juvenile Diabetes Research Foundation of Iowa...their corporate charity.  Here is the video we shot during the opening hour of the event:

Several hundred dollars were raised and the "Master of the Grill"...by just a few votes was Chef Curtis Sills.  Here Chef Eric Jackson congratulates Chef Sills on the 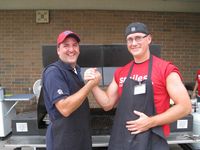 narrowest of wins...the real winner was JDRF.  It was fun guys...and thanks for letting us play a small part in the event.

I KNOW...I Am Forgetting Something...

But, gotta run.  Much to do..need to get breakfast/brunch fixed...invited Aaron, Mandi and Taylor.  Then do my weekly gutter cleaning.  Don't ask.  If you want to carry on the conversation leave a comment here, head to my personal Facebook Page Thingy or...on Twitter it's @MichaelLibbie.  Have a Superior Sunday! - Michael

Posted at 08:50 AM in Sunday Morning Coffee | Permalink