Sunday Morning Coffee is about gossip, politics, religion...you know the stuff that

makes you crazy. It's a look at the past week and a glimpse into this.  And, because it's a conversation feel free to leave a comment here, head to my personal Twitter Profile @MichaelLibbie or my personal Facebook Page Thingy.  Hey, it's just friends visiting over...coffee.  Grab a cup!

On his Friday broadcast Mr. Michael Medved was commenting on the horrific 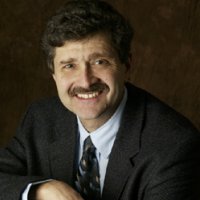 bombing and shooting that went on in Norway.  Always seeking a way to incite his Republican base of Islamophobics he launched into his, "...understanding of the situation":  "It has been reported that the terrorist has ties to Islam.  The attacks occurred on Friday.  What is Friday?  The holy day of Islam.  There is no other religion on the planet that takes their Sabbath and turns it into a day of murder and terror.  Islam does not mean peace it means submission."  Yesterday it was reported that the suspect in custody, Anders Behring Breivik, has significant ties to Right Wing Christian Fundamentalists, who, like many in the GOP, have significant issues with anything to do with "multi-culturalism".  What is worse, my friends, is that Mr. Medved, who claims to be an Orthodox Jew, would know the rabbis tell us that the punishment for "baseless hatred" is pain and sorrow.  What is worse he issued his decree during the what is called the "Three Weeks" a time between now...and the 9th Day of Av.  Dangerous Mr. Medved...very.

I saw "My Gal Michele" three times this week...  That is all....back to our regular program. 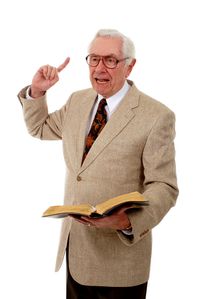 Some of you know that for over two years I was associated with a pioneer group of webcasters.  It was an amazing experiment and something that I believe will be a major force sometime in the future.  I, the employees and many of the hosts pulled out of Webcast One LIVE when things began to get...weird.  People involved in the programming made a decided effort to push the network to the far, far right.  The decision to leave was not made lightly. I spent four to five hours a day working on the content of my business news program.  Having been a professional broadcaster  fueled my desire to be prepared and offer insightful talk and opinion rather than..."wing it".   Last week on the Webcast One LIVE page of my friend J. Michael McKoy there was a "job offer" seeking producers for the "new" line up.  One of the requirements isthat

the person seeking a position with the webcast group must have a "Biblically Based Worldview".  I haven't the foggiest of ideas what the hell that means.  My first question would be..."Who's Bible?"  I suspect it would be the Bible of those who adhere to "replacement theology" and come to find out it's the usual band of Republican Operatives.  Names like McKoy, Deace, Miller, Green...  Weary my friends...weary.

The Debt Ceiling and History that means...nothing.  It has been raised 89 times since becoming "The Debt Ceiling". And know what?  The icon of the Republican Party, none other than President Ronald Reagan, saw the debt ceiling raised 18 times...during his administration.  This, my friends, is a bunch of bahooy.  The hand wringing, the press-conferences, the meetings, the walking out of meetings...it is all political theater meant to enrage and electrify the base.  Raise the damn "Debt Ceiling" and let's, while we're at it...build high speed rail between Des Moines and Chicago.  K? (I know, what you are thinking..."Where did that come from?" .  I dunno.)

We could be living in Mother Russia where young girls, who call themselves Putin's Army, tear off their clothing to show support for the president.  True...and Mr. Putin hasn't even announced that he's going to seek re-election.  This is how you run a campaign!  Here is the video from our friends at CBS News. 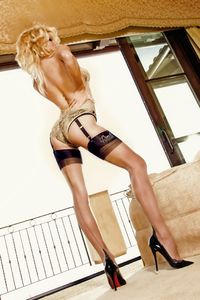 Meanwhile...since we're doing "girl talk"...Pamela Anderson has just released a line of stockings.  Yes, stockings.  I can't keep this a secret any longer...so here is the story...and here is the picture.  Hey...hold it...come back.  Read the rest of the BLOG!!!  OK, so let's say you don't want to buy her stockings...you can buy a photo of her in her stockings, and those killer red soled heels, from Secrets in Lace.  Forget all that political mum-bo-jumbo.  Now we're on a roll and things are really starting to look much, much better huh?  See...we need to take our minds off of the weird stuff.

The Folks In Washington Are Cranky Because...The Music 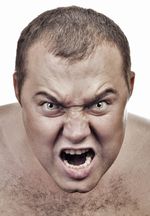 folks in Washington...and Des Moines...crazy(er).  After listening to NPR and All Things Considered...we now know why.  It's the music!  Quick...what were the best yeas of this nation?  If you guessed the time period when Ike was president, you're 100% correct.  President Eisenhower David Eisenhower, the five-star general who became this nation's 34th president in 1953 was perhaps best known for vacations at Camp David (named after his son), golfing and the Interstate System, think I-80 that Terry "Governor for Life" Branstad considered making into a toll road.  Why was it so calm?  The music.  Rock and Roll wasn't popular.  We had Jackie Gleason with "Music for Lovers Only", Percy Faith, Nat King Cole and by 1962 we had Tony Bennett and "It's The Good Life".

People danced...together.  Mom...dressed in a dress and pearls.  Dad in a white shirt, skinny tie and his jacket had a "pocket square".  At five o'clock Dad came home and it was time for the neighbors to gather for martinis and a cigarette or six.  The war was over, the nut case from Wisconsin was out to pasture, everybody was working.  WHOOT!  It was the MUSIC!  Want to change your life?  Mr. President, Mr. Speaker, turn off talk radio, the music of today and go out and get some MP3's of Frank, Tony, Connie, Dean...and enjoy for cryin' out loud!  It will change your life.  (Told you this would be the fun part!)  Hell, I'm feeling better already!

Last night my Bride and I attended the Max Wellman and Roxi Copland Show at the Temple for Performing Arts.  Des Moines is fortunate to have such talented singer/songwriters in our midst.  But, not for long.  Roxi is headed to Vancouver with her hubby and Max, it is rumored, is heading south to expand his career.  Look, no BS...you've got to go.  It is a "Date Night" that will score big points...and will put you on the road to recovery (see above).  The band

was amazing...the music is amazing...and you have NEVER heard "The Lady is a Tramp" done like this...ever.  You have three more opportunities to hear and experience a little class.  They are back this Friday and Saturday nights with a matinee on Sunday.  Go.  Just go...and after you do, you can write me and thank me for putting your life back together.  Want tickets?  Head to Ticketmaster and buy them already!

We did the...regular stuff.  We closed down Gusto Pizza.  It could have been dessert at Django or wine at Sbrocco ...but the fantastic pizza at Gusto's was calling us.  And...hey, I got to ask Josh about...this:

Here is a photo of the exact spot Gusto Pizza will have for their "pizza wagon" during tailgating at the University of Iowa home football games.  You have to "know somebody that knows somebody" to get a spot like this.  I now know the secret...but, promised not to tell.  My payment...just might be the opportunity to go with and...sell some pies.  "Hey, hey..you...you need to get some!  Get ova here!"

The Village of Windsor Heights - Tidbit

I've shared with you before how we are not allowed to "cut the grass" in The Village.  We may, delicately, "mow the lawn" but...cutting is is so...gauche.  Here's just a little more for you to...learn how we in The Village must live.  The cities that make up the Des Moines Metro may allow the grass of lawns and (say it ain't so) empty lots grow to a height of 10 inches.  But, here in The Village you may only allow said growth to reach a height of 6 inches before the law comes down with a hammer.  Ahhhh...life in The Village.

This would be more fun today.  Not one word about my friends...the wackjobs who make up the Urbandale Republicans...or Minutemen or whatever.  Not...one.  We are making progress.  Have a wonderful Sunday and let's do all this over again next week.  Between now and then...listen to more Tony Bennett.  - Michael

Posted at 09:03 AM in Sunday Morning Coffee | Permalink

Great as always, Mr. Libbie. I like this Putin girl movement. We need more of that in America! (we grow 'em bigger here anyway)

Hey Max...thanks for the heads up on one of the stories! I do think those folks in Russia...have it right. Thanks for reading and for the comment! All the best.. - Michael