It's like several friends getting together over coffee talking about politics, gossip,

the day and events that are important...and not so much.  It's Sunday Morning Coffee...grab a cup and let's visit:

This past Saturday was, for Jews, the reading of the law of the red heifer.  A perplexing commandment.  To make something pure...you become impure.  It's said that King Solomon knew the reason for every commandment in the Torah...except this one.  Here, if you want, is some insight.

My Gal Michele In Town!

Future president Michele Bachman was in town yesterday...we heard from a number of friends last night she was at the Iowa Cubs game.  (Which, by the way...they won!  It is a sign....)  Also at Principal Park, we hear, was our friend Iowa Secretary of Agriculture Bill Northey. The odd thing, both were sitting along the left field line.  Wonder if they knew?

It's Safe To Come Out & Play

The Iowa Legislature, finally, adjourned last week.  A couple of interesting thoughts about what was a very long session: 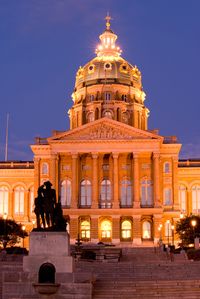 I dunno...week ten and no newsletter from my BFF State Representative Chris Hagenow.  I've been thinking of putting up posters or asking AE to give a run at putting his photo on milk cartons.  Maybe I just need to go to more Chamber Meetings?    I'll try to visit with him over the holiday weekend and see what's up.  I suspect that he'll get something going prior to the election season...I think.

US Military Targeted In Iraq with Iranian Weapons

That's the headline this morning from CNN.  I find it amazing that nobody seems to "get it".  It is a matter of trust and faith.  For some reason Americans have this deluded concept that our way is the very best way and we will bring peace and democracy and stability to these countries.  People, they do not think like you and I.  Talk about a cultural war...that they are willing to wage forever.  They have been fighting for centuries.  We are in this for decades or not.  Word:  Out

Tomorrow is the 4th of July and it is truly a wonderful holiday.  If anything I'm spotting more and more "red white & blue" on homes around town.  In times of crisis you would think we'd band together but, both parties have us fighting each other about wacky stuff.  Anyway, enough politics.  Tomorrow is a day of festivals, parades and fireworks.  Including the event in the Village featuring The Faculty Lounge an 8 piece group of teachers who rock. Here's an older video about them.  See you there?

Every Once In Awhile....

You run into some really nice folks.  There is Jeff who owns Midwest Heating & Cooling.  Our son's AC went out on Friday...the hottest day of the year...so far.  Jeff showed up at 4:30PM to do the fix.  I was the "stand-in" because Aaron and Mandi were working.  We talked about business, owning your own shop and serving

customers.  Good guy and here is some contact information for you.

Then there is Dan at Lowe's in West Des Moines (I am allowed to cross the border because I have...papers.)  I was there trying to fix...this:  It was this way when we purchased the house...and it was time for a fix.  Dan took the time to walk me through the fix, recommended parts and gear.  I asked him... "How long have you been doing this?"  Dan:  "Since Monday."  Dan is a licensed electrician and has been for five years....but no work.  So he took a steady job at Lowe's.  Nice...and thank you!

Last week my friend Tim Albrecht, spokesperson for Governor Branstad, said that Iowa needed to fix it's tax system because, for business, it's one of the worst in the nation and makes (Iowa) "wildly uncompetitive".  Meanwhile CNBC reports that Iowa is tied as being the best state in the nation when it comes to the cost of doing...business. (Looks like we've got lots to improve on...when it comes to roads.) And, Iowa ranks #9 overall. All begs the question:  HUH?  Gosh...and I promised no more politics...sorry.

Thrilla at the Grilla

It's a wacky idea that started to gain some traction last week.  It's a fund raising feud between a couple of managers at the Urbandale (Iowa) Hy-Vee.  They are, on July 15th going to stage the Thrilla at the Grilla to raise money for the JDRF-Iowa.  We got involved, shot this quick video and did the poster for them.  What a hoot.  If you're in the area....see you at the Grilla.

OK...gotta go.  My bride has a rather long list of projects and...we're putting some final touches on a client campaign too.  Have a great Sunday and a fantastic 4th of July.  If you want to leave a comment here...cool.  Or let's connect on my personal Facebook Page or my personal Twitter account @MichaelLibbie. May we all be blessed this day...and every day. - Michael