religion, sex and opinion I get to write.  Sometimes serious...often not...it's the stuff that tends to make folks crazy(er).  You can leave a comment here or we can hook up on Twitter @MichaelLibbie and/or my personal Facebook Page.  OK...disclaimer out, let's get some coffee but, as always, be careful...it's hot!  Oh..yeah, my disclaimer:  "My name is Michael P. Libbie and I approve of this message."

It raises it's head every year as folks become convinced that the "Great They" are attempting to take "Christ out of Christmas" or that "Christians in America are under attack". (Don't believe it?  Ask our friend David Duke - Photo)   Nonsense,

the United States is the most religiously free nation on the planet, next to Israel, but the propaganda works.  The other day I was having a cup of coffee with a liberal friend (I have two.) and he was telling me about how "spot on" the latest Rick "Jesus Sent Me to Save America" Perry ad is:  "People believe Christianity and Christmas are in danger.  Look at what they did in Rhode Island."  Huh?  So, I did.  Seems the governor there proclaimed the blue spruce a "Holiday Tree" rather than a "Christmas Tree" and did so in the spirit of his state's history regarding religious tolerance and acceptance.  That was all it took for folks to go over the wall and hold their own events with their own Christmas Tree lighting.  Who?  You've got to read this story from our friends at USA Today but make sure you read the entire article.  Oh...my. 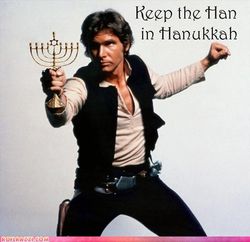 When I heard about this...I didn't believe it but the latest story about Chanukah (or Hanukkah) seems to point in that direction.  Last week President Obama and Vice President Biden lit a menorah in honor of Chanukah.  Trouble is...Chanukah, this year, doesn't start until December 20th.  At it's core Chanukah is a holiday (though minor) that celebrates Jews turning back the assimilation process fostered by not only outside forces but also liberal Jews.  Lighting a menorah two weeks before the holiday seems about right...or, left.  But, the most important thing to remember is we MUST keep HAN in Hanukkah!

In keeping with the spirit of the season I share this:  I wear a hat or a kippah.  It's a religious thing.  Last week I was in a grocery store shopping for my Mom and a lady (non-store employee) loudly says to me, "Merry Christmas!".  I was deep into trying to figure out what a Chuck Roast was (I've never purchased one in my life) so it

took me by surprise.  Rather than shouting back the obligatory greeting I made the mistake of saying, "What?"  She says, "It's Christmas and I'm wishing you Merry Christmas."  My mind racing about dates (see above) I shamefully said, "Christmas..today?"  She countered with, "No, not until the 25th the birth of Baby Jesus!"  Standing there like a bump on a log I said, "Oh, thank you and Merry Christmas to you."  Here is where it gets...good.  We were in the meat section of the store where they were serving samples of stuffed pork chops. She countered with, "Have a pork chop they are delicious!"  The guy (store employee) was standing there pork-chop meat on a toothpick.  I declined saying, "Sorry, I don't eat pork."  She says, "What...no pork?"  It was then I decided to pull the "Jew Card".  "Nope, I'm Jewish.  We and my Muslim friends don't eat...pork."  My new friends laughed as if I were telling a good joke.  I honestly don't think they knew and what was even funnier to them was this Jewish guy saying "...my Muslim friends..."  We have some education issues... (photo: Me "shocked" at being with my friend, Iowa State Representative Ako Abdul-Samad)

Last week I faulted Governor "For Life" Terry Branstad and my friend Iowa Department of Education Director, Jason Glass for the goofy idea of keeping kids who don't pull a "B" from entering a teaching college.  This week I think they've got a pretty good idea in suggesting that kids who can't read by the time they are in third grade be held back and given remedial reading lessons.  Frankly, I've never understood the concept of "social promotion" where kids are simply passed along even if they are failing.  The details on how we're going to pay for this are a little sketchy...but I'm thinking it's a good move.  You?

I'm really into this "buy local" thing.  I figure the investors over at Target won't miss my dropping an average of $646 during the 2011 Holiday Shopping Season but...my friends on Main Street will.  I'm hoping you're thinking about that as well.  By shifting just 20% of your dollars away from Big Box and into Mom & Pop you will have a HUGE impact on real neighbors and friends.  You with me on this? 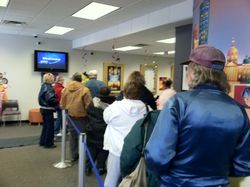 doing just fine watching local programming and Iowa Public Television.  However, when we moved the The Village of Windsor Heights our reception became very spotty.  Something about the huge trees in our neighborhood?  We wanted to hook up to DIrecTV but...the trees prevented a "clear light of sight".  I had looked into MediaCom but honestly wanted to avoid dealing with "Peggy" in Bangladesh and I had heard the "independent contractors" they use tend to pay less than minimum wage when you figure out all the hours it takes to do installs.  In the end...I made the buy but did so in person at their Des Moines office.   I'll let you know how it goes.

I was watching the Iowa Debate last night and made a comment on Facebook, "Watching the debate.  GOP women are...hot!"  There was a lovely woman sitting just over the left shoulder of George Stephanopoulos who was very, very attractive.  Maybe it's because Republican Women have the money to dress well and get weekly botox treatments.  I dunno...but it seems like it's always been that way.  My bride, who was also on Facebook, countered, "Ahem..."  My friend Ed Weintrob commented, "Michael...don't forget the babe over YOUR shoulder."  Actually, she is a member of the Republican Party...so I'm covered. ;-)  But...no botox...she's married to a poor Democrat.

Last week we did the photo shoot for our 2011 Holiday Card.  It's always a production but this time we added a new twist.  We video taped the shoot and we'll add the QR Code to the card so folks can watch the event unfold.  It's like reality TV but with a focus on "The Weiners".  You'll love it...here is a preview:

Week #43 without my Chris Hagenow Newsletter...in case you were counting.

Thanks for coming by!  Our son Aaron is headed over this morning to cook brunch.  Not known for his culinary expertise we're not sure what is in store.  However, Mom said she is coming too...so we're expecting another miracle.  It is the season...  Have a great Sunday!