world of politics, sex, gossip and...sex.  All laced with my opinion.  And, because I get to write this I can't hide.  My name is Michael P. Libbie and if you want to comment here, feel free or slide over to Twitter @MichaelLibbie or my personal Facebook Page is right...here.  Ready?  Grab a cup! 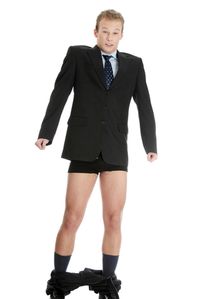 It's one thing for partisan hacks (some would say like me) to roll out false information but it's another thing when "news" picks it up and acts like it's fact.  The other day the unemployment numbers for black men and women were released.  A GOP hack from New England (she would LOVE for me to list her name) wrote on Twitter:  "Unemployment among Black Males the highest in the nation since those numbers have been recorded".  My conservative friend (see...I have one or two) and news/commentator guy for CNN, Lenny McCallister picked it up and Re-Tweeted it.  Trouble is...she made it up.  It's not true.  Here's the story from Bloomberg Businessweek.  Dang, I gotta do their work...too?

"Obama Doubles The Price of Gas!"

Here in Iowa, where 1040 WHO Radio leads the state in mis-information (or at least ultra-right wing information), it's not uncommon to hear or read anything about the

President and learn this bit of false information.  The fact is...President Obama has not "doubled the price of gas".  In fact the price of gas is lower than it was in the spring of 2008.  But who wants to look stuff up?  I know we love to suggest that the the guy living in the White House is responsible for...everything.  Fact is neither President Bush nor President Obama can be blamed for gas price increases...  It is..speculation kids.  Here's look at retail gasoline prices...from our friends at Gas Buddy...if you want to go back 8 years...have at it. 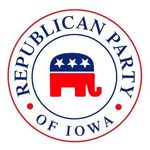 The GOP is spanking the collective ass of the Democrats in the Hawkeye State.  Latest look at the number of registered Republicans and Democrats clearly gives the edge to the GOP.  Proof, my friends that advertising works.  When you've got talk-show host after talk show host pounding the drum for APBO (Any Politician But Obama) it's going to move the ball.  Iowa going Red?  Perhaps, and then we'll be just like Wisconsin.  Here are those numbers from our friends at Bleeding Heartland.

Last week the female governor of Arizona signed into law the The Whole Woman's Health Funding Priority Act.  In part, the act forbids the payment of any state funds to any group that performs an abortion.  Governor Jan Brewer signed the bill at a a rally for an anti-abortion group.  No politics here at all.   I suspect that if a hospital performs an abortion, for any reason, state funds will be withheld?  Clearly the folks at Planned Parenthood are stressed even though they say one in ten women who seek medical care/treatment come for an abortion.  Here's the story from the New York Magazine.  So, are my "limited government" friends supporting this too?  I dunno...just asking.

This morning our friend Jennifer Jacobs of the Des Moines Register had an interesting story about the make up of the Republicans headed to their national convention in Tampa.  Of the 13 delegates and 13 alternates only one (Governor "For Life" Terry Branstad) has publicly supported Governor Mitt "It's NOT a Cult!" Romney. The others? You've got to read this to understand how screwed up the Iowa GOP really is.

Sleeping With the President (And Getting Paid)

I told you there would be...sex!  I suspect Ken Mason sleeps with his wife Sally.  Ken also collects $54,175 to attend fund raising events with his wife, who happens to be the University of Iowa...President. This "sweetheart deal" came to light this morning because our friends at the Des Moines Register were poking around in the U of I financial reports. The really funny thing about all of this is nobody remembers hiring Ken to be a "presidential fund raiser"  But that could be a typo.  Maybe Ken was hired to be the "presidential fun raiser"?   It's a good read and I know your dying to see it...here you go.

Overheard Near the Wal-Mart Parking Lot

As further proof that one does not need to be informed to vote (thank you once again 1040 WHO Radio...I'm sorry I just think their programming sucks) this comment was heard near the "big ass" Wal-Mart in the Village of Windsor Heights:  "Looky there babe!  That's Is-lamb writtin'!  I told you them boys at WHO said that sombitch is an A-rab!"  I just offer this stuff up as a public service.

My friends in the Iowa GOP, (Congressman Steve "Get The Hell Out!" King) froth whenever somebody talks about "the illegals" or "those people that are invading our border".  We've all heard about how illegals are "taking jobs away from American Workers" and how "they have a plan to occupy the United States".  (See, I do listen to 1040 WHO Radio.) Trouble is...uhm...immigration has virurally stalled and there is nobody to do the jobs that, as U.S. Senator Saxby Chambliss (R-GA) says, "...Americans don't want to do".  So..step up.  According to this story, from our friends at Bloomberg, agriculture is in deep do-do because there are not enough people to harvest onions, slaughter cattle, pick lettuce, care for alfalfa and the list goes on and on.  So, my friends it's time to get off your butt, secure your future and the future of our nation.  Go pick an onion. 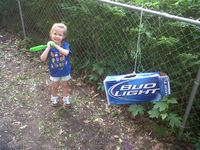 Yesterday was Cinco de Mayo (For those of you not home schooled do not confuse this with Mexican Independence Day.  That is in September.) and to celebrate our multi-cultural roots (part urban part rural) the family held a celebration of sorts.  Here is our lovely grand-daughter Miss Taylor working over our Redneck Pinata.  Hope you had a great day as well.

Enjoy your Sunday and remember to pass this along...but only if you had some fun.