and religion coated with my personal opinion and some gossip. My name is Michael P. Libbie and if you would like to comment here, feel free.  Or we can connect on my personal Twitter Stream @MichaelLibbie or my personal Facebook Page which is right here.  OK then...what devilment has been going on this week?

Some Catholics and some Jews have their underwear in a knot as they continue to bitch about the Affordable Care Act, contraception and health coverage for

employees. I get it...you folks have a deep and abiding belief and there is a very simple answer to this entire issue.  Hire ONLY "Religious Catholics" or "Religious Jews".  When you have a job opening from executive director to janitor just post these words, "Only religious ________ need apply."  Done, over...stop wringing your hands.  Besides working with additional xenophobic individuals who hold to the "only true belief" should offer everybody a sense of...grace.  But, then again, there is that dastardly idea of, free choice. You know...something that was given to us by...G-d.  Tough huh?  Oh, and while you're at it...pony up on property taxes....or a fee for service for police, fire and roads.  OR...hire your own fire and police protection.  (I can see it now...a badge, a gun and a shtreimel.)  I know...the horror! (Photo: paul prescott / Shutterstock.com) Seems there is a significant lack of doctors in Iowa and the only way to fix that issue is to put a cap on malpractice lawsuits and/or have a "review panel" take a look at the proposed lawsuit and rule if it has merit or not...all designed to bring down the cost of malpractice insurance. That is the view from Gov. Terry Branstad (R-IA) who says it's these kinds of things that keeps physicians away from the Hawkeye State.  Rubbish...  I have been, many times over the years, involved in attempting to lure physicians to Iowa and never, not once, have these issues been raised. What is more likely to come up is..."Iowa?  So, what do you DO in Iowa?" or "Let me visit with my spouse.  She/He is a little concerned that we'll be living in the 'Siberia of the Midwest'."  or "So, tell me again how many symphony dates there are in Red Oak?" And...oh this is good:  According to a recent article from the Des Moines Register the idea that high insurance rates are keeping physicians out of Iowa just ain't...true.  What is true might be, "So, tell me again about your Jewish Day School in Fort Dodge/Mason City...Des Moines."  While I happen to LOVE our quality of life in Iowa transferring that to a skeptical doctor from Philadelphia/Chicago/LA/NY/Charlotte is a tough sell.

If you read this from outside the Iowa border you may not know about the flap going on between Sen. Tom Harkin (D-IA) and his alma mater Iowa State University.  Retiring Sen. Harkin had considered offering his papers from nearly 40 years of public service to ISU.  They would be used as the backbone of the Harkin Institute an educational/public policy program which, I would suspect, would continue further study in specific areas of interest dear to the liberal lion of the US Senate.  But...whoa down...Monsanto/Dupont/Iowa Farm Bureau/Iowa GOP we'll not have any "institute" be looking over our shoulder and into industrial agriculture. After all, ISU ain't no "liberal bastion of intellectual learning" like that Commie University of Iowa! Yet another black eye...weary.

The announced departure of Sen. Tom Harkin (D-IA) from the US Senate shook up the politics in Iowa...big time.  Last week the Des Moines Register, in an Iowa Poll, said former Governor Tom Vilsack (D-IA) (and current US Secretary of Agriculture) held a big lead over announced candidate Rep. Bruce Braley (D-IA).  Two things are wrong with the idea of Secretary Vilsack running for congress:  1) Tom Vilsack loves policy and he's an administrator. I can't see him running for office on the perpetual two year cycle for US House of Representatives and 2) Tom Vilsack will be the running mate for Hillary Clinton in 2016, sewing up Iowa early.  Go ahead...write it down.

Meanwhile "The King of Iowa" Will Win

The "Harkin Shake-up" has the Iowa GOP in a lather.  It also has Karl Rove (Remember him from election night?  He was convinced Gov. Romney was 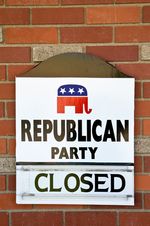 winning...and "...something must be wrong with these numbers".)  Anyway Rep. Steve King (R-IA) wants to be a US Senator and Mr. Rove views Rep. King as a danger to the "kinder, nicer, happier GOP". (Think Rep. Eric Cantor (R-VA)...)  The "Happy Wing of the Republican Party" would much rather have somebody, oh say, like Rep. Tom Latham (R-IA).  After all, Tom is "happy".  He has a nice tan and he doesn't come across as bat-crap-crazy.  However if it comes to a primary... Rep. King will win.  Primaries tend to bring out the faithful and there are none more faithful that the "Bat-Crap-Crazy Wing" of the Iowa Republicans.  Want more proof?  Look who is running the Iowa GOP.  It's them "Paulists"...  Who just last week said, "If you are looking for marriage equality don't look to the Iowa GOP."  Translation: While our tent is big it just ain't big enough for them queers! - Thank you A.J. Spiker...you have made my point.

(Personal note to my friends outside of Iowa:  I am truly sorry this has become "The Iowa Blog" but there is so much going on in our little state and the Iowa Legislature is

in session which makes everything here so much more...crazy.  Besides, you would be surprised at how many Iowans don't know what the heck is going on...either.) Back to our regularly scheduled program:  Well, well...looks like the majority of Iowans support President Obama and more controls on firearms.  You know...CRAZY stuff like universal background checks, banning assault weapons and that nutty idea of limiting the number of rounds in a magazine. (No silly...not THAT kind of magazine...this kind.)  If you want to read more...here is a link to the Iowa Poll and the Des Moines Register.

It was a busy weekend for family.  Our daughter Holly come up from St. Joseph so grand-daughter Sailor could compete with the Midwest Storm Cheer a competitive cheer leading squad at a HUGE event called the "Get Loud Tour" from Great Lakes Championship Company (GLCC) based in Louisville.  Hundreds of girls, loud music...lots of shrill screaming and...GLITTER...everywhere!  Here is Sailor getting her "glitter on" just prior to the event.  I've got film of this and we'll do a story on an upcoming show.  The

back-story of the business is very interesting.

Then, last night it was the 4th birthday party for our grand-daughter Taylor.  Nice time.  Taylor, by the way, is convinced this is...Batman. I dunno...  Anyway, wanted to share this photo with you. It's Gramma June (92) with her great-grandson Carter. (I swear he looks like the E-Trade Baby!)  You know...it's moments like this that are simply fantastic.  I am blessed.

Have a wonderful Sunday and thanks for reading!  OH...and DO NOT FORGET VALENTINE'S DAY this week.  You will regret it...forever...if you forget.  That's a public service announcement. - Michael

Thanks fir the tip. We are in for Cafe di Scalia

And if you hate Valentine's Day or are not in a relationship--only FIVE MORE DAYS until the end of the long, personal nightmare (at least for this year).

Trisha, thanks for the note. Glad you are headed to a nice place! Enjoy and thanks for reading! - Michael

Joel...I hear you. Unlike Christmas there is no...Festivus for Valentines Day. - Thanks for reading and the the comment! - Michael