Thanks for coming by to read my personal opinion on the stuff you hate:  Politics, Religion, Gossip. My name is Michael P. Libbie and you're invited to comment here, follow me on my personal Twtter Stream @MichaelLibbie or my personal Facebook Page.  Lot's on tap kids...let's go:

Could it be?  Last week members of the sane wing of the Republican Party floated a couple of trial balloons...just to watch the GOP Wacky Wing make more threats.  A bi-partisan group from the US Senate suggested we need to get serious about immigration and offered up several proposals.  The ever-wacky Robert Ussery of the Iowa Minutemen condemned the plan as a "slap in the face".  Meanwhile former GOP chairman of the Republican National Committee, Ken Mehlman (Jewish and Gay...so there you have it...) came to Iowa to urge his party to support "gay

unions".  (Please, no jokes about 'pipe fitters' we're talkin' marriage equality not labor unions.)  Framing the conversation along "limited government", "family values" and "personal responsibility" Mehlman attempted to shift the conversation.  This too will go down in flames.  Trust me the Republicans can't help themselves.  They wish, with all their might, to remain the party of frustrated, rich, white guys who fear everything.  Including the cute guy with the purple tie...I dunno...but just had a vision of my friend Dave Price of WHO-TV 13 who no doubt is reading this as he gets ready for his Sunday morning show, "The Insiders" or writing "Price of Politics".  BTW his guest today at 9AM is Sen. Tom Harkin (D-IA).  Free plug Dave!

plans to ask it's members to contact congress in an effort to repeal the Second Amendment.  The abrupt change of direction occurred after the White House released a photo taken in August showing President Obama shooting skeet at Camp David.  "We had no idea he had or had ever shot a firearm.  We fear for our country when people like Obama, a liberal socialist who happens to be Muslim actually had access to a gun."  The White House did not comment.

OK, that piece above was satire.  For those of you in the Tea Party that means it's not true and an attempt at being funny. However, this isn't.  This week I had the 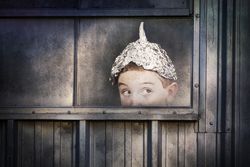 misfortune to spend some time listening to talk radio as I drove to Little Rock, AR. Oh My Gosh!  The morning guy at KCMO (which at one time was a great midwest station) was going on about how any talk of gun control by any member of the GOP was, "An attempt to kick the Republican Party to the fringe left; and we'll remember who they are so we can mount primary campaigns against them." And you wonder why sane members of the GOP sit out.  Meanwhile a little further down the road a talk show host was telling his listeners that, "I believe the attack on Sandy Hook school was done by terrorists hired by the federal government...if indeed there was any shooting at all."  Finally this from the "Rushbo": "The reason the Democrats want amnesty for all these illegals is because they need to replace all the Democratic babies they have killed with abortion."  These people are obscene.

Lt. Governor Rick Sheehy (R-NE) resigned yesterday following an Omaha World Herald newspaper report that he used his state-issued cell phone to place thousands of late-night calls to women. Whoa down now.  I happen to know that many of the faithful take part in "Prayer Chains" which involves phone calls at all times of the day or night seeking support for each other and calling on Jesus to right the wrongs of this nation and rein in liberal activists who trample on the Constitution.  I am sure Mr. Sheehy was just doing his part as a faithful Christian Soldier.  There is nothing at all to this story.  Move along now, nothing to see.

This week I was asked if I would be interested in attending the Value Voters Summit in the future.  The man asking me was from Texas, wore a huge cowboy hat with two pins, (one saying "Pray for America" and the other "Impeach Obama!").  I asked him what goes on at a Value Voters Summit. "Why we listen to great speeches about what is wrong with America, how we can get our country back and we pray a bunch."  What do you pray for?  "We pray that Jesus will turn this nation back to it's Christian roots."  Christian roots?  What about all of the people in this nation who are not Christian?  "Them?  Well we pray they get changed 'cause they are all going to Hell, just like this country if we don't get control."  Do you feel, as a Christian, threatened?  "You're damn right!  These socialists like Obama want to take our faith, our guns and our liberty."  But, what about the faith of the people who are not Christian is Obama after them too?  "No because they ain't Christian.  It's us that's under attack.  You really need to come to one of our conventions...."  I said I would "think about it" while declining to tell him I am Jewish and a Progressive...I think his cowboy hat would have exploded. You see, I'm not too sure he has ever actually visited before with...Satan.

I see State Senator Mark Chelgren (R-Ottumwa) wants to change the Iowa Constitution and allow women the opportunity to serve in the state militia.  Except Iowa does not have a "state militia".  It was disbanded in 1877 when the Iowa National Guard was created. But, none of that matters to the ""Bat Crap Crazy" because to guys like Sen. Chelgren and others like him it is the government we need to fear and saying words like "militia" rings solid with Tea Party folks like my new friend from Texas.  Here is the full story from my friends at Bleeding Heartland.

This week I visited with a friend who lives in Canada.  He asked me, "So what is it about you Americans and guns?"  We talked about how, in Canada, it is difficult to obtain a license for a firearm and once you get one it must be renewed every three years. "I don't want or need a gun", said Sid.  "But what many of us in Canada do not understand is how your people oppose even simple things like checking to see if a guy isn't a nut case before you hand over anything from a handgun to a military style rifle.  We find it...odd."  Me too Sid...me too.

I see where former Navy SEAL and sniper Chris Kyle of "American Sniper" fame was shot and killed along with a second man at a firing range in Texas.  Sad for the families and for so many other reasons.  But, you are right...guns don't kill...  I get it. Weary...very.  Here is the story from CNN.

I made the Clinton Presidential Library while in Little Rock.  WOW...technology 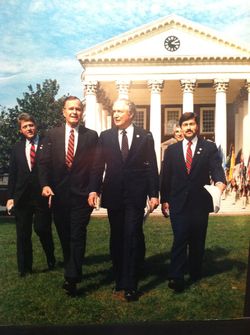 allows so much interaction.  A very cool trip. If you get in that area it is a MUST See.  Very near to the library is the Concordia Hall Museum.  What caught my eye was a plaque on the outside of the building with a "Star of David".  Seems the Christians who lived in Little Rock denied Jews from renting any social halls to hold large events.  So, the Jews of Little Rock got together and built a building.  It is now an art and cultural center associated with the Little Rock Public Library.  Inside they had a display of the Clinton Years in Arkansas.  That is where I found this photo of then Governor Clinton, President George Bush, Secretary of Education Lauro F. Cavazos, Jr. and our own Governor Terry Branstad.  No comment (but you should see the nutty stuff folks posted my FB page...Weary - Part Two.

Have a Super Sunday...and thanks for coming by! - Michael

"News radio" WGOP (err. WHO) 1040 will never be confused with CNN, Iowa public broadcasting or the BBC. Does anyone take them seriously? Why does that station call itself "news radio" when it hardly covers any news?

Joel, when I travel i LOVE listening to NPR. Often smart people talking about issues in depth and not just being flame-throwers. It is sad what WHO and other stations have become but what is tragic is so many people listen and...believe. Thanks for reading and for the comment! - Michael

Not sure what to say but..."Intriguing"

Regarding your Canadian friend, if you live all your life a certain way, then other ways will seem strange. Since Canada's violent crime rates are roughly 33% higher than the US, I'm inclined to think I prefer what we have here. Just saying.

Art: Sorry, I am late responding to your comment...that dang work stuff. What data are you looking at? I just spent 30 minutes (thank you...) chasing down some stats and what I see is that the US excels at violent crime. Suspect the devil is in the detail so love to see what you are looking at. BTW, the province my friend lives in shows a high crime rate. He would tell you that is due to the large number of "First Nation" people living there. Interesting... Thanks for reading and for the comment! - Michael