together about politics, religion, news and gossip...all colored by my personal opinion. My name is Michael P. Libbie and if you want to comment here, feel free.  Or we can connnect on my personal Twitter Stream @MichaelLibbie or my personal Facebook Page is right here.  So...what's been going on this week?

Let's Save Ourselves into Oblivion 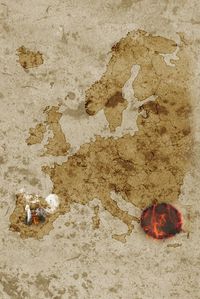 wealthy while pushing to other classes to the curb.  At least that's my opinion.  Our nation is, once again, headed to another financial cliff where, by design, spending by the government will be cut and hurt any chance of further recovery efforts.  Who is pushing us in that direction?  My friends in congress who cling to the notion that European Austerity is good for...America.  Rubbish.  When private business won't turn loose of the trillions in capitol they have been hording for the past decade it's up to the government to step in and encourage job and economic growth.  But, that's not about to happen anytime soon because we keep raising the spector of the "boogie man" and our nation's debt.  Silly...

Gov. Terry Branstad (R-IA) is starting to look more and more like he wishes to retire and it couldn't happen too soon.  Gov. Branstad has told the state/nation that Iowa lacks physicians because of the number of malpractice lawsuits and the high 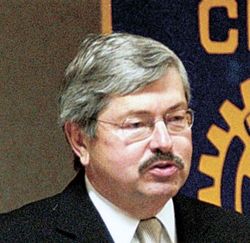 cost of malpractice insurance.  False, as pointed out in this Des Moines Register Editorial, but he keeps banging the drum.  The reason physicians don't look kindly at Iowa might be because they can't appreciate our "rural quality of life" as I pointed out in a former post:  While I happen to LOVE our quality of life in Iowa transferring that to a skeptical doctor from Philadelphia/Chicago/LA/NY/Charlotte is a tough sell.

Meanwhile Gov. Branstad continues to balk at expanding Medicaid coverage to the 150,000 Iowans who would be better served in the federal program than the lousy patchwork plan called IowaCare.  Couple those issues with his continued attack on labor, women and the belief he needs to give more tax dollars to already wealthy companies and it's clear he's seeking a way to leave office.  Soon, I would hope.

As more and more Tea Party Darlings such as Gov. Rick Scott (R-FL) caves to the Affordable Care Act and expansion of Medicaid to their states Gov. Branstad (R-IA) is looking more and more like he is adrift on a stinking cruse liner.  I had thought he would reverse his course and expand services to Iowans.  Last week he met in Washington with US Sec. of Health and Human Services Kathleen Sebelius (former Governor of Kansas) and says Iowa is out.  Gov. Branstad would rather try to "fix" a very broken system.  OK, Governor...pony up the cash.  You've got tons in the coffers.  Let's see what you've got.  I am not alone in castigating Gov. Branstad have a look at this from my friends at Bleeding Heartland. Oh my!

Which Brings Us to Tom Vilsack

Last week US Secretary of Agriculture Tom Vilsack said he was not interested in running for the US Senate and would rather remain in the Obama Cabinet.  Some had him as the front runner for the US Senate seat to be vacated by Sen. Tom Harkin (D-IA) but, as I said earlier that is not going to happen.  What is much more likely is that Vilsack will come back to Iowa to rescue the state and return to the governor's office.  Unless... State Senator Jack Hatch (D-Des Moines) who is an ardent foe of Gov. Brandstad considers a run.  However the office is Vilsack's should he wish but I still have him as the running mate for Hillary Clinton in 2016.  With Sen. Hatch it's more of a long-shot for Terrace Hill but still fun. 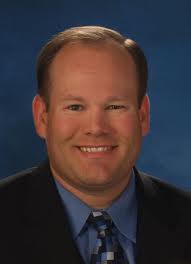 This Is Really Local

My friend Will Rogers is seeking the post of the Chairman for the Polk County Republican Party who will vote on Tuesday. I hope he gets it.  The party could use a good dose of "Jewish Logic".  As an MOT (Member of the Tribe) it will be interesting to see if there is any conflict among the faithful Christians he may be working with.  But I doubt it. Will is an upstanding guy who just happens to have lousy political ideas.  He'll fit right in.

Speaking of the Republicans

Former Arkansas Governor and one-time presidential candidate Mike Huckabee (R-AK) was in town whipping up 250 of the faithful about the topic of abortion. (Yes, they are still at it.)   Gov. Huckabee compared abortion to the Holocaust and said nice things about Israel.  That the meeting was held at a Waukee mega-church which is the home to our old friend Rev. Jeff Mullen made sense.  What is ironic about this entire conversation about abortion is where is "personal responsibility"?  The right talks about it all the time and if abortion (various faith groups have different thoughts on abortion) is the "great sin of America" why not remind those people who have or do abortion that they will be judged at some point and burn in Hell?  Maybe it's just not convincing enough?  I dunno...you?

This Is Really Ugly

Recently we've been told that a man in Flint, Michigan directed Hurley Hospital staff to not allow any black employees to come into contact with his newborn daughter.  The man, who has not been identified, is said to hold some "racist beliefs".  The nurse is identified as Tonya Battle a 25 year employee of the hospital. In her lawsuit she claimed she was reassigned and a note was placed on the assignment clipboard saying, "No African-American nurse to take care of baby". The hospital said as late as February 19 they denied the fathers request.  But yet, on Friday they settled the lawsuit out of court.  I find this all to be stunning, sad and scary.

The Pawn Shop That Wasn't

Last Tuesday folks from "The Village" of Windsor Heights packed the council chambers to urge the Board of Adjustmentt to deny a license or permit...or whatever they do...to a firm from Nebraska wishing to put a pawn shop in "the storied and iconic A-Frame" just south of I-235. The speakers invoked "safety", "scary people", "guns", "Detroit", "children", "the elderly", "schools", "police protection", "pandering", "robbery", "drugs" and "violence" in their pleas to deny a pawn shop from "...marring the landscape of Windsor Heights".  Yikes!  In the end the Board of Adjustment voted to keep "the great satan" away.  Heck, we've already got a Wal-Mart.  BTW best line of the meeting, which also got a chuckle: "The police are already stretched thin by being over al Wal-Mart all the time.  Adding a pawn shop will add to their troubles."  Yeah...but all the action would be confined to a two block area. 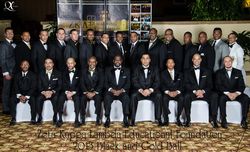 The Black & Gold Ball 2013...I didn't make it this year.  In fact had I not seen a bunch of my friends including Desmund Adams, Felix Gallagher and Craig Barton from Zeta Kappa Lambda all dressed up (last night) on Facebook I would not have known I missed it.  Dang!  Hope it was a good time, you raised some awareness and some cash but come on guys, "Let a a brotha know!"

Today at 11AM is "Brunchpocalypse" over at The Point (8410 Hickman) in Clive.  My friend Sam Auen promises some gastric wonderment with things like, Korean Chicken & Waffles, Hot Mess Express and a bottomless Bloody Mary Bar.  I have never had Korean Chicken & Waffles...there is always a first.  For more info about Sam and his stuff head over to Sam's site at Tacopocalypse.

Have a wonderful Sunday and Happy Purim! - Michael

Jeff, he will and such Chutzpah will follow. Thanks for reading and for the comment. Have a GREAT Sunday and Happy Purim! - Michael

Thank you for planting the seed of a possible run by Mr. Hatch as Governor in my mind! I like the idea quite a bit and am curious what he thinks about it. Thanks for yet another hot cup of coffee!

I am unconvinced that Tom Vilsack is still qualified to become governor again. He emptied the Treasury the last time he was governor and quite frankly I find that disturbing from a businessman's point of view. Tom also has a relationship with Monsanto Corporation that is questionable to say the least and in my opinion as an investigative reporter I would consider it almost illegal. Terry Branstad who I find politically incorrect in every way has secured a large amount of money in our treasury. The fact that he won't give some of it too the food banks in Iowa speaks very poorly of him. We Iowans are considered the most generous people in the country yet this Governor generosity is non existent.

Jon, Lots of things have been shaking since Sen. Harkin announced he'll not seek another term. That has left everything from the top down in play. Sen. Hatch is an obvious choice here in Central Iowa it will be interesting to see who else...if any...pop up. Thanks for reading and for the comment! - Michael

Peter, It's no secret that I'm a Tom Vilsack fan. His management of the state was really quite good and his understanding of policy is superior. He would sail back into Terrace Hill but I'm still betting on VP with Hillary. That would lock up much of the Midwest and he knows his way around DC...well. Regarding Monsanto...I dunno but it is Iowa and Agriculture and those pockets are pretty deep. Thanks for reading and for the comment! - Michael