Sunday Morning Coffee is religion, politics and gossip all shaded with my personal

opinion.  My name is Michael P. Libbie and I believe, contrary to what your parents said, we should talk about religion and politics...because those two items are what really matter.  Feel free to leave a comment here or we can connect on my personal Twitter Stream @MichaelLibbie and/or my personal Facebook Page is right here.  Lot's going on...let's go!

One of my friends from the Republican Party asked me the other day, "Michael, if your president is such a great guy how come the Left is beating him up over all these scandals?" The simple answer is, "We, unlike your friends at Fox, tend to castigate our own because we expect, always, to move forward and to seek justice and transparency."  When you seek the truth it's harder to manufacture crazy.  Yes, some on the Left are disappointed and many of those same people are ideologues who, just like the Right believe everything should be run "their way".  I'm still convinced that, at the end of the day, President Obama (love putting those two words together) will more than weather this storm and will continue to provide solid leadership for the nation.  I know...that is upsetting to many of you on the Far Left...and anybody who is a member of the GOP.

Weary.  That's what I am when I see and hear about these "Fantastic Memorial Day Sales".  Call me a purist but I think Memorial Day is one of those holidays that shouldn't be turned into an excuse to hold a slimy retail "event"..  Do that on goofy holidays like President's Day or Halloween but let's leave Memorial Day to something...special.  As for me...I ain't buyin'.

My Friend The Sceptic

I had coffee with a friend of mine who was beating the "doom and gloom" drum regarding President Obama. "The economy is bad." "Not enough people are working." The IRS scandal is going to tank him." "I fear the press will turn on him with a vengeance."  He even used words like "Watergate" and "President Nixon". He also shared something interesting, "I didn't vote for him.  Something about him just does not feel right."  Maybe he is looking for a real reason?  I dunno...

The Strange State of Virginia

Not sure if you saw this.  Last week the Virginia Republician Party put forward their slate of candidates for various offices and (cue the Tin Foil Hat Parade) it could not have been more...wacky.  The Tea Party won the day largely because there was no primary but a nominating convention where fringe groups rule.  Some of the results:

And you thought there was no religious litmus test for public office? 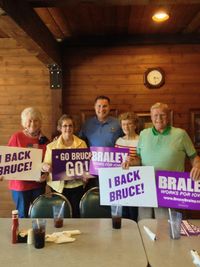 Last week, in a Quinnipiac University Poll of 1,411 registered Iowa voters, 57% of them didn't know enough about Rep. Bruce Braley (D-IA) to form an opinion of him which is the reason Mr. Braley is doing non-stop meet and greets across Iowa.  Just this past Friday he was in Hampton, Clarion, Humboldt, Webster City and Iowa Falls.  Meanwhile the second or third tier GOP candidates are scrambling for position in what will become a bloody primary fight among "red meat conservatives".  It will be fun to watch.  My friends from Bleeding Heartland have a complete review of the poll right here.  Promise to come back? (Photo: Bruce Braley with supporters in Humboldt, Iowa.)

Plenty Of Back-Slapping in Des Moines

When there should have been some ass-kicking.  The Iowa Legislature packed up and left town last week leaving behind some awful legislation.

And that's the biggest problem.  The legislature in their rush to "get out of Dodge" allowed little media review and public input regarding these items.  I'm betting "The Devil is in the Detail" comes back to haunt us.

I know, "Huh?".  Nobody wants to talk about this wonderful way in which Iowa can fix any ongoing budget woes.  The simple explanation is that out-of-state corporations, who now avoid paying much in the way of state taxes, would be required to submit tax returns as an entity without shifting income and expenses to a more "tax friendly" state.  Many "pro-business" people don't want to talk about combined reporting because, and you guessed it, it might just hurt the "job creators".  Weary.. 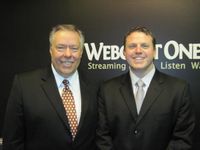 I see where my friend Jason Glass the former director of the Iowa Department of Education is headed back home to Colorado as the Superintendent of the Eagle County School District.  I will miss his candor on Twitter.  He was always responsive and I enjoyed his friendship.  And...he's moving on up.  Salary here in Iowa was $147,000 while the advertised salary in Colorado is $175,000.  Nice going...and they have mountains.

When I came to Iowa in 1979 Jim Zabel had already been broadcasting here for 30 years.  I met him only once.  He was fun, loud and full of energy.  "Z" died last week at the age of 91 at his home in Arizona about 45 minutes after leaving a message with former Iowa quarterback Chuck Long asking him if he would consider being on his Sunday evening show "Two Guys Named Jim".  You could say Mr. Zabel died doing what he loved...working.

Here in Iowa it's cold and rainy for the 2013 Memorial Day Weekend.  While those folks holding outdoor graduation parties might not like it...I think it's perfect.  Memorial Day, while to some, is the beginning of summer but for many of us it is a hallowed day spent in memory of those who gave and continue to give their lives in defense of our nation.  No loud fireworks or gaudy floats will you find in the cemeteries of America.  On this day flags fly and people, rightly, remember. 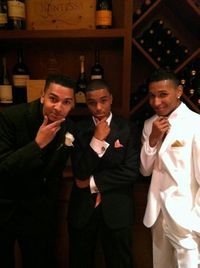 For those of you who have come to enjoy Mom & Me...thanks.  I continue to post quick stories about my soon to be 93 year-old mother and the stuff she says and does. Here's the link.

Finally...today Garlicpalooza is going on in Mingo, Iowa at Cleverley Farms. Always a nice event and congrats to my friend Khalil Adams (center) who graduated from Roosevelt High School of Des Moines. Sharp kid...who holds so much promise.

I don't know much about Bruce but am concerned that he voted for the Keystone pipeline which (in my opinion) is an ecological disaster, opposed by the Native Americans (through whose sacred lands it will run) and not provide much relief for our oil needs. So right now the verdict is still out.

Hi Jay! Thanks for your comment. Not sure if you heard but Congressman Braley voted, just last week, against Keystone. http://clerk.house.gov/evs/2013/roll179.xml To be honest, I've not followed Keystone very closely until some folks started talking about Bruce and his early vote. If you are looking for more about what Congressman Braley has done for Iowa you might check: http://www.iowaproblemsolver.com/ Thanks again for reading Sunday Morning Coffee and for your comment! -Michael