Sunday Morning Coffee is my regular piece on politics and religion, two things your

Mother said you should never discuss.  Stir in a little gossip for flavor and BAM!  My name is Michael P. Libbie and you can leave a comment here, join me on my personal Twitter Stream @MichaelLibbie or my personal Facebook Page which is right here.  OK, so much to share.  Let's get to it:

Late last week the House GOP voted for the 40th time to gut the Affordable Care Act (ACA).  How nice.  I'm pleased the Republicans have so much time on their hands that they continue to ignore critical economic issues and play games with the public.  Even some of those who voted for the ACA now love to demonize it.  Never mind that the vast majority of Americans support Obamacare. But we don't hear much about that.  Here's a piece by Jack Bernard for Insurance News "Only 35 Percent of Americans Oppose ACA  as Too Liberal".  You are welcome.

My president...and yours...is celebrating his 52nd birthday today.  I know that really, really bothers many of you and I could not be happier to share the good news.  Oh...and he was, Mr. Trump, born in Honolulu which is in (wait for it)...the United States of America.  But you already knew that.

I have a friend who is in the radio business in Western Iowa who "...loves Steve King (R-IA) because he is honest".  Yes, I will give him that.  He is honest about being an odd duck.  Last week the self proclaimed "Champion of States Rights" decided that states should not be allowed to protect their citizens with regard to food safety.  As if the Farm Bill wasn't already a mess Rep. King slipped in an amendment that effectively bars states being able to enforce laws which may be more stringent than others.  For example fertilizer use, cage-free eggs and a host of other state mandated regulations would be against the law if they "infringed on states that have lesser regulations".  OK then...which Steve King do you really like the "states rights" King or the "federal rights" King? 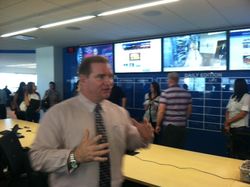 positions as did the Des Moines Register where five from the newsroom and another four employees were given the pink slip. Saga Communications (SGA) has seen their stocks increase over the past twelve months from $30.60 to $51.84 but the bean-counters decided heads must roll.  Meanwhile Gannett (GCI) who owns the Des Moines Register has seen their stocks grow by 44% over the past year but still whack jobs across the board.  The "Job Creators" over at Gannett are on a roll.  Meanwhile, I got a look at the new digs for the Des Moines Register.  Here Editor-in-Chief Rick Green (I think he's still there) shares his take on the "Control Center" in the newsroom.  Now, with five fewer journalists, they'll have room for another big-screen TV or two.

Once upon a time Iowa had an entire staff of folks who looked out after the public health of its citizens. Not any longer.  For weeks hundreds of citizens have fallen sick due to what public health officials said was the result of contaminated bagged salad.  Well over 100 had to be hospitalized. Last week the Iowa Department of Corporate Health said they knew where/how people got sick but decided not to inform the public regarding the source of the illness. "All the products are off the shelf..." was the rational.  The Federal Drug Administration, yesterday, made it clear the diarrhea salad came from Mexico and had been served at area Red Lobster and Olive Garden restaurants. Note to director Mariannette Miller-Meeks, your department failed in allowing consumers to make the choice of supporting or not supporting facilities which import cheap food at the risk of public health.  The endless salad bowl, for some, became the endless toilet trip.  Sad.

While you were sleeping thirty folks lost their jobs at the place that helps folks find jobs.  At the same time the Branstad/Reynolds Campaign is saying Gov. Branstad (R-IA) has created 160,000 jobs well on his way to making good on his 200,000 jobs promise of 2010. Last week I shared with you the bad news that we'll not make the 200,000 jobs number because there are not enough people in Iowa...or so says Debi Durham of the Iowa Economic Development Authority.  Don't ya love the spin?  Here's the Workforce Development story from our friends at the Des Moines Register.

...this fellow goes to.  Last week in Ames, Iowa there was a panel discussion

regarding the DREAM Act and this guy shows up with about as cruel a sign as I've seen.  I get it that people have every right to protest something they feel so strongly about but being cruel at the same time?  On hand for the panel were Senators Tom Harkin (D-IA) and Dick Durbin (D-IL) and yes the event took place in the congressional district of Steve King (R-IA) on purpose.  Well played my friends...  On the bright side when the DREAM Act does pass we will be much closer to that magic number of 200,000 jobs.  Look at the bright side!

He will be in Des Moines this Wednesday at a press conference regarding Social Security.  Seems some folks in the "Do-Nothing Congress" want to put an end to Social Security while others wish to expand it. Sen. Harkin is on the correct side of that debate.  Meanwhile we've just celebrated the 23rd anniversary of the Americans with Disabilities Act, the signature law made possible by Sen. Harkin.  I remember how opponents lobbied against the bill saying it would crush businesses and people would lose their jobs.  Familiar huh?  Here is a piece from the senator about work that needs to continue...23 years later.  It's why I like him...

Rep. Bruce Braley (D-IA) is headed to Israel next week with 37 other members of congress.  The trip, sponsored by the American Israel Education Foundation, is timed to coincide with the resumption of peace talks between Israel and Arab leaders regarding Judea and Samaria.  I'm hoping he returns with a more clear understanding of what democracy looks like in an area that has too little freedom.

It is Georgie Birthday Month around here.  My bride celebrates each day of August because...she can.  Of course I am invited to take part in the daily celebrations.  Think of Ramadan but without the fast.  Ramadan, by the way, ends this Wednesday.  You are welcome.

For those of you who follow Mom & Me you know she is doing much better now that she's off several medications.  Being involved in the daily care planning of a loved one is well worth the time and effort...for everybody.

Thanks for coming by and have a superior Sunday! - Michael