My name is Michael P. Libbie and I get to write Sunday Morning Coffee a weekly

rant about stuff nobody is supposed to talk about.  You know, politics and religion.  I throw in a little gossip just to make the conversation sweeter.  If you have a comment, feel free to post here or let's connect on my PERSONAL Facebook Page and/or my personal Twitter Stream @MichaelLibbie but, remember, play nice.  Let's get started. (Oh yeah..."Twitter is a waste of time!"...uh huh $41.65 at the close of last week.)

Well now it seems like even Rep. Steve King (R-IA) may be on the wrong side of this issue...too.  Politico is reporting that a poll, due out on Thursday, conducted by a, "trio of GOP friendly groups" indicates that, "...indicate that voters will be warmer toward politicians who favor immigration reform, an effort that faces an uphill battle in the Republican-led House."  Well now, ain't that special.  If you would like to read the entire piece here is that link.  Question: How come, if Congressman King is wrong on this, wrong on health care, wrong on marriage equality...how come you people in Western Iowa continue to vote him in?  Must be his TV ads... 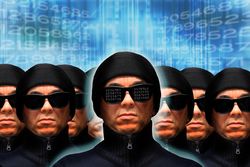 Well now isn't this interesting.  Recently, as reported by ARS Technica a technical research reporting agency, it seems that "somebody" out there has created a tool to put extra strain on the website HealthCare.gov.  The report says the hackers have created what they call a "tool to slow down the site".  My, my...somebody isn't playing nice.  Meanwhile Fox News continues to lie about the Affordable Care Act by parading one phony family after another onto their screen.  Look, I don't like the fact that the president bought into this insurance company, GOP program any more than others.  But, it is clearly a start toward a more humane way of dealing with health care in this country.  You want to read the report?  Sure, here is the link. sure about the economy today or tomorrow.  And that they are so unsure of the fragile US economy that they are ready, at any point, to shutter their manufacturing plants, retail stores, etc.  You do know that because every talking head on every toxic right-wing radio and television station has been pounding that drum for two years.  Right?  Uhm...nope.  From the Department of Don't Confuse Me With The Facts comes this recent study by our friends at The Principal which says small business people are optimistic about the economy and their ability to grow.  Sure, just like in farming there is uncertainty but where isn't there.  Dang!  Now what Chicken Little?

Oh, Did I Mention Farming?

Still no Farm Bill.  Why?  Because "The House That Says No" say that poor people, people who were affected by their cut and burn mentality with regard the budgets, are using too many food stamps.  And know what?  According to Secretary of Agriculture Tom Vilsack if the "Do Nothing Congress" fails to get busy on the Farm Bill, farmers, who are really tied to this piece of legislation, may stop buying machinery, vehicles and upgrading their business.  What happens then?  The rural economy goes into a downward spiral.  And for those of you living in urban areas in Iowa think, "So?"  Tell that to the workers at John Deere who were recently laid off.  This is all silly, silly, silly. Weary my friends...weary.

Now For Some Good News!

We have a new mayor in Windsor Heights, Iowa.  It is Madam Mayor too.  Diana Willits was elected last Tuesday along with a couple of other progressive candidates to the City Council.  Some of the other candidates choose to go negative right out of the gun and...they lost.  Here's the deal kids, when running for public office it is much better to run FOR something than against something.  Hint: Running for office to oppose sidewalks near a school is not a good idea.  It might have been attractive back in 2010 when our Tea Party Friends were running all over the country with fear and doom reports...but it ain't that way today...at least on the local level.  Congrats Diana and Company!  A pleasure to call Windsor Heights...home. (Yes, I know, I voted for a registered Republican AND a woman!  The horror...)  BTW, first female mayor in city history.  I have NOT done the research but...could she be the first female mayor in the Des Moines Metro?  Anybody?  I should ask my friend Bob Santi.  He knows EVERYTHING!  Bob? 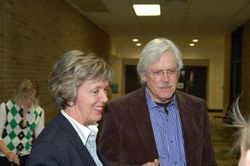 Congratulations to my friend Susan Judkins (left with Sen. Jack Hatch) who was recently appointed to the Clive City Council.  Susan ran an impressive campaign against Rep. Chris Hagenow but lost by 22 votes. (The ghost of Kevin McCarthy still haunts me.) She recently changed jobs and had some time to spend working for the public in a new way...as an appointed city council person filling former Councilman Steven Brody's vacant seat.  Brody resigned unexpectedly on October 3rd, citing, "personal reasons".  BAM!

Sorry for such...LOCAL news...but it seems that the stuff on the state and national scene is so....ick.  Like...this:

Moody's Analytics estimates the Des Moines Metro saw a 0.27 percent, or about a 22.1 million dollar drop in gross state product as a result of the partial shutdown of the federal government for 17 days in October.  The Quad Cities, including Davenport and Bettendorf in Iowa and Moline and Rock Island in Illinois, were hit even harder, experiencing an estimated 25.3 million dollar loss.  Iow City took a 7.1 million dollar hit, while the Cedar Rapids, Ames and Sioux City Metros saw losses of 3.8 million, 3.4 million and 2.4 million each.  Uhm..."damn gobment ain't good for nothin'"...right?  Weary...double weary.

OK...week four with having Mom at our home.  Friday night we had another nosebleed and spent from midnight to 6AM at the ER in West Des Moines.  That was fun.  Mom takes rat-poison (Warfarin) as a blood thinner.  Each month we check her I&R levels at her doctor.  That test takes about thirty seconds.  Meanwhile that test at Mercy West Lakes ER takes four hours.  I dunno either.  But got stuff stopped and back home in time to watch the sun come up.  She was grumpy yesterday.

Have a wonderful Sunday and thanks for coming by!!