My name is Michael Libbie and I am a progressive. This is Sunday Morning Coffee where I share 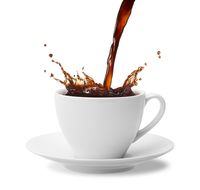 with you some thoughts about politics and religion. From time to time I'll throw in a little gossip, just to add flavor. Some of the stories you've seen...others are new but each is peppered with my personal opinion. If you've got one...or two...feel free to share. Otherwise, as Mom said: "Shhhhh, you never speak about politics or religion because it makes people crazy." Let's go and have some fun!

The Pope - At It Again

You would think, by now, Pope Francis would figure out that his place is in a cathedral giving sermons about salvation. You know, talking up saints and saving sinners. But noooooo this Pope has the gall to go to places like 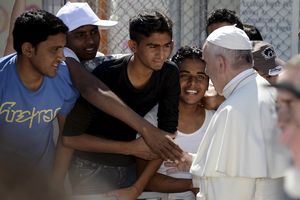 Lesbos and tell the 3,000 people living in a "country club" detention camp who now face deportation to Turkey that, "You are not alone..." Oh, and then he has the nerve to pack up three MUSLIM families and truck them to Italy. Where he "says" the Vatican will care for them.

I love this man.

While the rest of the world looks on and wrings their collective hands in worry and fear Pope Francis calls them out for their sin and their abandonment of their fellow humans. "May we... recognize that together, as one human family, we are all migrants," the pope said in a prayer in memory to the hundreds of people of all ages who died in the Aegean while trying to reach Western Europe.  He IS doing his job. (Photo: Religion News Service)

Then There Is This...

Speaking of "doing your job" Sen. Charles Grassley (R-IA) continues to tell the world that he is above the law. That his interpretation of the United States Constitution is all that matters as he continues to deny President Obama's nominee Judge Merrick Garland a hearing before the judicial committee and then the senate. He should re-think this. Judge Garland might be the best the GOP can hope for given their wacky election year candidates. Would't that be a hoot? Know what? A President Sanders would ask President Obama to withdraw the nomination because Judge Garland isn't liberal enough. That's the word from the Thursday night CNN event. Ain't this fun?

While it doesn't have a snowball's chance in Hell...the Iowa GOP is all about finding a way to limit access to health care for women. Last week The House Appropriations Committee voted along party lines for language in a health and human services budget bill that would remove Medicaid funding for family planning facilities in the state that provide abortions. Trouble is...Medicaid dollars are not providing abortions in Iowa. But that doesn't matter to Rep. Walt Rogers (R-Cedar Falls) nor to the Republicans who lined up to move the bill forward. Facts and things like that pesky constitution don't phase them. 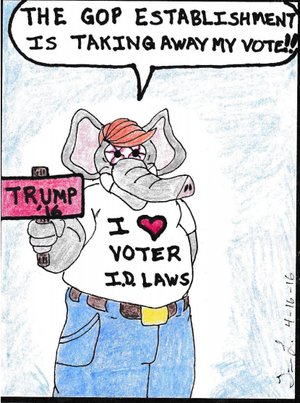 In case you missed it...and if you are not a political junkie you may have...this weekend there has been a huge left-wing, commie pinko event in Washington, DC. It's called Democracy Awakening 2016 and they are there whining about the usual stuff like, voting rights, equal pay for equal work, livable wages, immigration reform, campaign finance reform...blah...blah...blah. A bunch of unwashed liberals shouting about a bunch of stuff nobody cares about. Well, OK, maybe the Pope...but nobody else.

Unless you are Donald Trump.

You see The Donald has, according to The Donald, been given the shaft. This week he is upset about voter ID laws that have kept thousands of his people from voting for him. Will somebody explain to Mr. Trump that we have laws like this to keep people from voting. Quit whining you're sounding like some slimy, unwashed, liberal. - Don't you love the irony? (Cartoon - Tim Lloyd)

Back in 2008 the county attorney for Dallas County, Iowa filed felony child endangerment charges against my friend Desmund Adams. It seems Wayne Reisetter must have believed that stepping up and disciplining a child who was headed for serious trouble wasn't a good idea. Desmund was arrested, there was a trial and in the end the jury found Desmund not guilty and openly questioned the rational of the charges. Four years later in 2012 the Iowa Republican Party, so fearful that Desmund would wrestle an Iowa State Senate seat away from them, published a hit piece just days before the special election in December. That politically directed hack-job written by "reporter" Jeff Patch had a devastating effect, not so much on the election, but to Desmund and his family.

Steering children away from making poor choices and ruining their lives is the responsibility of parenting. Today Khalil Adams is a model citizen who has a promising career in acting and lives with his father and family in Clive. The irony? A year after those Dallas County charges against Desmund were issued Wayne Reisetter's son, Kirk Reisetter, went to prison for bank robbery in Nebraska.

But, There is More

The GOP is still fearful of Desmund Adams. They have looked at the numbers and they know the only Democrat who can beat David Young in November is Desmund Adams. If you spent some time and checked the numbers, who voted over the past three cycles and who stayed home you too would see what they see. They fear the strength Desmund has built among energized progressives, the youth and minority voters will propel him to victory in November. So?  So, they have made sure that the debunked story remains very visible.

Politics is often ugly. It doesn't have to be that way but...for some...that is the choice they make. And, we wonder why so many are turned off by the process.

Last week I was in a discussion with a friend and he asked me about progressive issues such as equal pay for equal work. When I said, "The sad reality is that women, on average, in the United States are paid 20 to 25 percent less than what their male counterpart is paid. Same job, same education, same background only she is a she..." His answer to me was, "OK, but it's getting better."  Well it's not.  In a 2012 analysis the American Association of University Women found that even after controlling for occupation, industry, hours, work experience, college major, religion, race/ethnicity, GPA, education, number of children and marital status, women are paid only 82 percent of what their male peers are earning just a year after college graduation. Ten years out of college, the gap widens with women earning a mere 69 percent of what men earn.

As my friend Desmund has said over and over again: "Equal is equal. There are no shades of equality."

Coming up next week is Passover. This week we'll be spending time cleaning and getting ready for the holiday. The first Seder is on Friday evening and I am honored to be with the Adas Israel Congregation in Mason City. 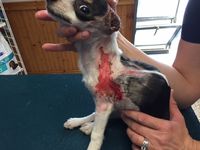 I'm not a very good Jew because on Saturday evening I'm headed to the Furball in Panora, Iowa. It is a fund raising opportunity for Panora PETS a wonderful network of vets, foster parents and volunteers who rescue even the strays.  We've been blessed to have received wonderful dogs from them....the most recent, Yofi, who, at just a few months old, was burned by scalding water and then suffered for days before a Panora PETS volunteer stepped in to make the rescue. She now has a forever home with us. The photo is of Yofi at the vets three weeks after the rescue...I know tough to imagine. This is her this morning 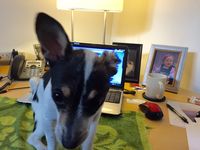 So, I'm skipping out on the Second Seder...but I promise no chametz. We'll hold a Seder at our home on Sunday evening.  It's the little things...I guess.

Have a wonderful Sunday...I'm off to another birthday party for our 8 year-old granddaughter. She's been milking this for weeks!

How about income inequality in general? That's not popular with the "progressives" South of Grand or in the faculty lounge. They tend to be as anti-labor as the Republicans.

Hello Michael and thank you for reading...I'm not familiar with they may think...and yes, there is general income inequality and that too has to change. Thanks again... - Michael