"The United States no longer quite the United States." So said French Holocaust historian Henry Rousso following a ten hour detention at
Houston's George Bush Intercontinental Airport. Welcome to Sunday Morning Coffee featuring some of the news you may have heard or

maybe not. It's just politics with a dash of religion just to keep it fun. Grab a cup but, careful, it's hot.

Yep, that's reality. Professor Rousso was to have taken part in a discussion, "Writing In Dark Times" when he was stopped by an immigration official and told that his visa would not allow him to give a lecture and receive an honorarium. If you would like to read the entire article from CNN here you go. The stunning thing is this is happening all over the country. Forgive me for sounding a bit paranoid but our country is starting to resemble something from Schindler's List. But, wait...there is more:

I Think You Are Guilty of Being a Threat = Deportation 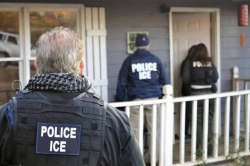 The recent crack down on undocumented people took a chilling twist last week when the White House determined immigration officers could determine, on their own, if a person posed a threat to the national security. For example if a person is arrested for speeding or for domestic violence or for drunk driving the officer, who may be deputized by the federal government, can decide to lock the person up and start the deportation process. Trial? Nope... The effect this has had on the immigrant community is they don't want to seek medical treatment, call the police about a safety issue or any interaction with anybody in authority. It drives the community deeper underground. Even in the minds of those of us not under suspicion the whole thing is frightening and reminds us we have become a police state. The kind of Soviet Bloc system we, at one time, loathed.

Pipelines and Steel and Lies

During and after the campaign Donald Trump called on business to buy and build with American products. Things have changed. At issue is the Keystone Pipeline. The very pipeline that Trump said should be built with "American steel". In fact Trump signed an executive order and said that at the time and even mentioned it during a speech to Congress last week. But it was a lie. On Friday the White House said,  "Since [Keystone] is already currently under construction ... it was hard to go back. Everything moving forward would be all under that executive order." If Donald Trump's mouth is moving he is lying. Here is the article from CNN Money. Random related thought: Last week Sen. Al Franken (D-MN) said it was an "outrage" that the FBI was investigating protesters who were decrying the Dakota Access Pipeline but not looking into the serious nature of the administrations ties to Russia. I know...it's a head shaker but remember...in a police state the authority is never questioned. If you would like to check out the story from Ring of Fire here you go. But, come back...there's more! 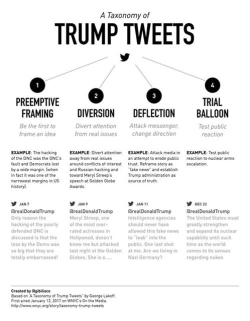 I think you'll find this interesting. George Lakoff is a Professor Emeritus at University of California Berkeley and he created this visual which explains the thought process behind the constant Tweets of President Trump. It's perhaps the best explanation I've seen for what, to many, seems like the work of a frantic lunatic with a cell phone. Wait, maybe that still works. Anyway...here you go. Method to the Madness?

Yesterday I had the opportunity to listen to Gov. Martin O'Malley offer his thoughts on voting rights. The event was held at Drake University where Nathan Blake introduced the former presidential candidate who was making a requested swing through the Hawkeye State on behalf of several Democratic candidates. (I'm thinking his second in the past several weeks?) When you spend time listening to the madness that emanates from Donald Trump and his gang you tend to forget how sane, reasonable and principled some politicians are. Meet Martin O'Malley whom I have seen at least a dozen times over the past two...maybe three years. His issue, today, is taking on voter suppression in all its forms and calling for states to introduce constitutional amendments for voting rights.  "Passing a constitutional amendment that enshrines this fundamental right will give U.S. courts the clarity and authority they need to strike down Republican efforts to suppress the vote. The proposed amendment would set a high legal bar to defend against attempts to disenfranchise eligible voters, and empower Congress to enact strong electoral standards nationwide." The visit was timely. On Monday the Iowa Legislature will hold hearings on a voter suppression bill that demands 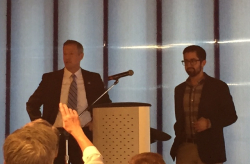 voters show identification at the polls.

Sidebar: I'll have Gov. O'Malley on the Business News Hour this Monday afternoon for a discussion about Democrats, Business and Economics.

He was named the "best candidate" to replace State Senator Jack Hatch (D-Des Moines) by the Des Moines Register but came up short in a three-way primary which, in 2014, propelled Tony Bisignano into that "safe seat" in the Iowa Senate. Now Nathan has his sights set on the Secretary of State. He has not yet announced but that is expected and traveling with and introducing Gov. O'Malley ain't a bad way to get out there. Expect Nathan to join me on the Business News Hour at some point before he announces. I'd like to learn more about how he thinks...you too?

Dumb Must Be Better 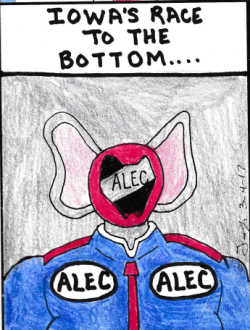 When you consider all of the bills being thrown around in the Iowa Legislature ya gotta wonder where in the heck are these hair-brained ideas coming from. Let us introduce you to the American Legislative Exchange Council where the Iowa GOP legislators are bought and paid for. So, cutting public education, gutting collective bargaining, pitting one firefighters against the police, shutting down mental health facilities, insane gun legislation...all that stuff has to come from somewhere...right.  Millions of dollars have been flushed into the pockets of our state legislature in an attempt to carry out the same policies that have sunk Kansas. If you would like to learn a bit more here is a great piece by Rick Smith for the Iowa Starting Line along with our cartoon of the week from our contributor Tim Lloyd.

Dumb it down for us...right?

When President Trump said he wanted to "unify" the nation he was kidding. However, in a sense, he has done just that. He and Gov. Terry Branstad (and his son Eric), the Iowa Republican House/Senate Caucus and their minions have sent hundreds of Democrats and Independents into action all across Iowa. It is a ground swell that I have not seen in decades. While we may not all agree on every issue there seems to be a common sense of purpose in fighting for the progressive values to more our cities, counties, states and nation forward in service to all our people.

Tomorrow in Polk County, Iowa hundreds will turn out for the Off-Year Caucus. Here Polk County Chair Tom Henderson and Executive Director Tamyra Harrison talk about the event and why it's important:

Join us tomorrow evening. Here is a link to the locations across Polk County...I'll see many of you in Windsor Heights at Saison Kitchen and Pub.

Next week I get to travel back to Mason City, Iowa to conduct services and do a two hour Torah Study for Adas Israel the Jewish Congregation of Mason City. Last week a teacher from that community reached out on Facebook and asked how she, a Christian, might be able to show support for the Jews in light of the recent spate of destruction of burial head-stones, graffiti on synagogues and hate speech on the Internet. I suggested that she write a letter to the editor of the Globe Gazette and include all people of various minorities. I hope she does...and maybe we'll have the opportunity to visit, in person, next week.