This past week we blew up lots of stuff. We blew up an airfield in Syria, we blew up the United States Senate with the "nuclear option" and

we've blown through millions of dollars here in Iowa. All this stuff blew up under Republican control. Nice job gang! Welcome to Sunday Morning Coffee where I get to share some thoughts on stories you've seen and some you may have missed. For me it's therapy. For you? Hey, if it gives you food for thought or a chuckle...it's working. Grab a cup and let's go!

It was to have been the most important economic meeting in the early days of President Trump reign as the General Secretary of the Communist Party of China (We call him "President" because it sounds better than 'Commie".) visited Mar a Lago. But right in the middle of the conversation we sent $90 million in missiles to an airfield in Syria. Nice start. Anyway there was no "showdown" in Trumptown 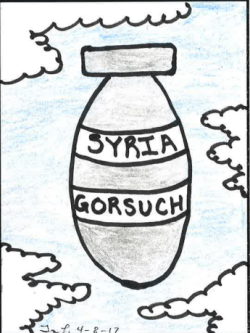 between the two leaders and the damage inflicted in Syria wasn't enough to keep the air force of Bashar al-Assad on the ground. The next day jets took back to the air to continue the war there. But, it was a nice distraction.

Blowing Up the Senate

Congratulations we now have a new Supreme Court Justice. It's pretty exciting to see how well the U.S. Senate works when they want to. Sen. McConnell (R-KY) halted any vote on one candidate and then pulled the nuclear option to get Gorsuch confirmed. How cool is that? Elections do have consequences. Now we move on to some other stuff like what Democrats want out of the massive $1 trillion dollar infrastructure bill. Mr. Trump is desperate to get a congressional win following the blow up of the health care package. We shall see if the Democrats will go along with the budget buster. (Cartoon - Tim Lloyd)

Blowing Up The Budget

Smartest People In The Room

I had the opportunity to hear an answer to a question posed to Rep. Bruce Hunter (D-Des Moines) the other day. A person asked him where all of these draconian bills passed by the GOP are coming from. He said, "Among the Republicans there really isn't anybody bright enough to write this stuff so I'd say that 80% of what we've seen come out of their caucus was written by the American Legislative Exchange Council (ALEC)."  How nice. We all know where Sen. Charles Schneider (R-West Des Moines) gets his marching orders as he is not only the Appropriations Committee Chair he is also, along with Rep. Rob Taylor (R-Waukee), the State Chair of ALEC. NOW we know who the smartest people in the room...really are. 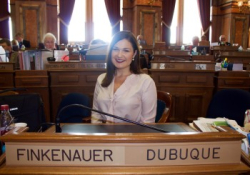 This past Friday Rep. Abby Finkenauer (D-Dubuque) filed paperwork to become a candidate in Iowa's 1st District. If she does run, and it is expected she will, Abby will face two term Republician Rep. Rod Blum in the 2018 election. Finkenauer, by the way is 28 years old in in her second term as a state legislator. You want young, fresh faces in the Iowa Democratic Party?  Bam! (Photo - Iowa Starting Line)

This week the talk around the table was if Sen. Nate Boulton (D-Des Moines) would run for governor in 2018. The person said, "I think he's too young. After all, he was just elected to the State Senate in November." Another person in the room said, "Wait, I thought you were all about attracting young dynamic leadership into the Iowa Democrats?" Bam! While it's true that Nate is young (36) and fresh to the Iowa Senate...have you seen him in action? Articulate, commands a room and has a long history of working for Iowans. We could do much worse.

There is a rising power in this northern suburb of Des Moines. The Ankeny Area Democrats reported at a Polk County Democratic Leadership Meeting they have over $6,000 in the bank and have set a goal to raise $20,000 over the next year. Why? Gary Schmidt the groups chair said, "We want to bring voice to the people and elect a series of Democrats to office in our community." In a community that once was known as a GOP stronghold this group of dedicated Dems is fun to watch. Meanwhile the Polk County Democratic Party is running on fumes and needs to focus like a laser on fundraising. That was exactly the point of conversation we had with new Polk County Chair Sean Bagniewski who, at the same meeting, announced plans for a Spring Democratic Event coming in May. Stay tuned.

Here is something that you might be interested in. My friend Claire Celsi is following up on her recent campaign for the Iowa House with a new mission. Proof that even in a loss you can build a coalition and make a difference. Iowans For Public Education launched early this year and has been picking up steam and support from all across the state. Now that the Iowa State Education Association is headed to court over the new collective bargaining law word is getting out. One of the stunning things Clare told me last week is that her group has found that about 80% of the male spouses of teachers voted GOP last election. Some folks need to take care of their house...first.

There is a flurry of activity at our home this weekend with Passover starting tomorrow evening lots to be done. If you are celebrating enjoy the Festival of Freedom. Here's a quick video from my friends at Aish:

Happy Passover, thanks for reading and have a great week!