Time for Sunday Morning Coffee my weekly take on some news stories you might have seen or...missed. They are all laced with my 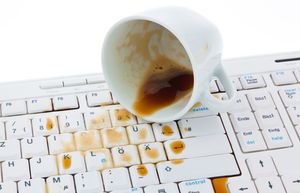 opinion based on years of percolating. Serious, fun, reflective but always dangerous to Republicans who, for the life of them, just can't seem to figure out they are supposed to work for us.

Looking For a Leader

If the Democrats are looking for a national leader who can make sense, talk above the shrill of the shout and has street credibility they might want to take a serious look at Elizabeth Warren (D-Mass) who is going about the business of cementing her progressive brand on the national stage. While her office says she is focused on her re-election to Congress she has been making appearances across the country. For example today she will speak to the NAACP in Detroit, she has been on a book tour with the release of "This Fight is Our Fight" which she says is a handbook to champion the middle class. Oh, and she has raised $5.2 million in the first quarter...more than any other U.S. Senator. In addition, and this can only help, President Donald Trump hates her and has often repeated nasty things about Sen. Warren. That, in itself, will work well among Democrats. Watch...and see. 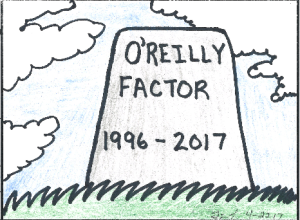 Last week Bill O'Reilly collected $200 million as he got the boot from Fox News. I, frankly, don't care much about that the only question is why did it take so long for Fox to kick his nasty ass off the air? I don't get it. Conservatives call up Jesus 24/7, praise family values and go about the business of whoring when they think nobody is watching. Or, worse, when caught they elect the dude as president and put up with crap from the likes of O'Reilly.

For those of you who still love "Good ol' Bill" he's got a podcast coming out on Monday called "No Spin News" at least that's what his revamped website tells us. Great, more dreck from a conservative for conservatives. (Cartoon - Tim Lloyd)

Loved By the Base?

President Trump has an approval rating that is in the basement. He has not drained the swamp but infested it with disgusting creatures. Yet the folks who voted for him say it was the right thing to do. In an ABC/Washington Post poll 96% of those who voted for him say it was the right decision only 2% say it was a mistake. The same poll tells us that a majority of Americans say Trump does not have the temperament nor judgement to be Commander in Chief and 60% have serious questions about his truthfulness and honesty. What the hell is the matter with you people? You elect a buffoon to the White House who can not tell the truth does not exude confidence in the American people...and you STILL think it was the right decision?  Weary of zombie people...

Meanwhile the word is out that this Carter Page dude...you know the Trump guy that really worked for the Russians? It's brewing into a big mess for lots of people including those in the White House today. Some saying they never even saw the guy yet he had Trump's ear along with Vlads?

Let's Dial It Back to Iowa 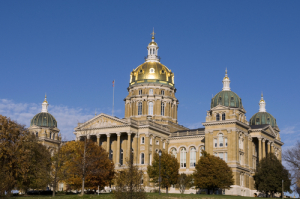 It's finally safe to come out of hiding. The Iowa Legislature, you know those gutless wonders who championed business over people, fog over transparency, guns over safety...yeah those folks...they are finally gone. But not forgotten. In their wake they have left Iowa in worse shape than it has been in decades. Under GOP leadership our state is bleeding red ink, working families are left out of health care, unions are being dismantled, teachers are ridiculed, education is silly but Jesus rules and they found enough money to support voter suppression as they fixed a problem that does not exist. And, know what, they are just getting started. For those of you who think it might be over hold on. Read the GOP Platform...they are doing exactly what they promised and more and there is more to come. Right now...as the stench starts to seep out from under the golden dome...they are meeting with their masters to inflict more damage on Iowa families, government workers, teachers, the elderly, folks dealing with mental health issues. Make no mistake they will be back and there is more to come....their masters demand it.

I was in a discussion last week about who might become the next governor of Iowa. It will be a crowded field with a host of Democrats coming out to challenge each other...in other words a lively primary is brewing. So too on the GOP side. Lt. Governor Kim Reynolds is so closely tied to Gov. Branstad that she may have problems with more moderate Republicans. So does that mean Ron Corbett is going to get serious about challenging Reynolds? I think yes and if that happens expect former Des Moines City Councilperson Christine Hensley to play a part. Watch my friends....

A week ago the media broke a story regarding Kim Weaver who is slated to take on Rep. Steve King (R-IA) in the 4th Congressional District. It seems Kim had a "side job" as a psychic about ten years ago. That has folks all bothered and it is newsworthy. Yet, in a statement from Weaver's political director Todd Prieb we get the side of the story Democrats are focused on:  "Frankly, the idea that people would care about something Kim did 10 years ago on an entertainment website more than Steve King’s horrendous voting record is insulting to the voters of this district.”  We shall see. Kim has raised a bunch of cash. It will be interesting to see if this has any impact.

Storm Lake and The Pulitzer Prize

It's pretty neat that a little newspaper deep in the 4th District that has been a secure home for Rep. Steve King (R-IA) would win a Pulitzer Prize. Art Cullen is the editor of the twice-a-week Storm Lake Times and has been a loud critic of King while championing the large immigrant population in his community. It's a cool story and one worth reading. Here is a link to the article from Poynter that puts the issue on people rather than big business. It will make your heart...lighter.

Yesterday I attended the Iowa Broadcast News Association annual convention held, this year, here in the Des Moines Metro. Journalists from radio and television gathered for a day of learning and teaching. There were plenty of young, fresh faces of students from several universities and colleges there as well. Gary Dolphin spoke at the luncheon about the link between winning football teams and education. He called on the students there to work hard and be true to their calling. It was really quite good. Last night the legend of talk radio Jim Bohannon was the keynote at the Annual Awards Dinner. Oh...the stories and the ability to tell a great story. Trent Rice the News Director of KASI, Ames won the Jack Shelley Award for excellence in broadcasting. For those of you who don't know...Jack Shelly was the long-time news director at WHO Radio and Professor Emeritus of Journalism at Iowa State University, who died on September 15, 2010 at age 98. Introducing Trent was former Shelly Award Winner Sue Danielson who is the afternoon anchor and Assistant News Director at WHO Radio. I'll have Jim, Trent and Sue on the Business News Hour next week talking...radio and broadcasting. Hope you can join us.

And, thank you. Insight on Business the News Hour was awarded three distinctions last night for excellence in broadcasting large - market radio. The awards mean a ton to a group of folks who put together the only hour-long business news broadcast in the Midwest. Thanks...again.

Have a great Sunday and thank you for reading!