There is something just mean spirited in Republicans and I'm trying to figure out what it is that drives them to be so hateful. Welcome to 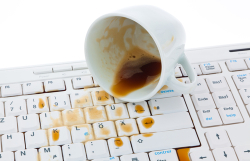 Sunday Morning Coffee a little project that keeps me wondering about things like that and more. Here are some of the stories you may have seen...others you might have missed. All, however, are laced a little "snark". Why? What the hell...why not. Grab a cup but careful, it might be hot!

They say elephants, when provoked, can be very dangerous. Ladies and gentlemen meet the Republican Party. I'm not sure why they are so angry and delight in bullying but there seems to be a clear pattern 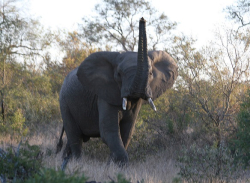 from suppressing the vote to taking away health care to demanding a woman jump through hoops in health care to slashing education (a fetus is important but once it slips out of the vagina not so much...). Where does this anger come from? What is it that turns, often, rational humans into bullies?  If you've got an answer to that clue me in?

Last week, in yet another show of "bully power" there was a party in the Rose Garden. Republican House Members were invited to whoop it up following their "repeal and replace" vote. While it's a little early to have a party the GOP and President Trump were more interested in waving a victory flag to their base. After all working men and women and older voters broke for Trump in November and they were desperate for a victory lap. But, be careful what you wish for. The AHCA (American Health Care Act) is rife with issues that simply are not clear. Some lawmakers say people with preexisting conditions are, or will be, covered. Other GOP members say it does not. Still others, when asked about the bill, say, "We just don't know.."  THAT is how hungry the Republicans were to have a victory party. Hell, just vote for it so we can stand around and say we did something that we promised for...years. So, after holding over 50 votes in the U.S. House of Representatives over the past eight years to "repeal and replace" they finally on a 217 (one vote margin) got it done. Champagne for all...and to the people affected: "Let them eat cake."

But Can They Hide?

Last week I met with a woman who says she is done being quiet. "I decided, after the November election, that it was not enough just to go out and vote it takes more than that. It takes standing up, taking a side and challenging people like Rep. David Young (R-IA) because they are bad for Iowa and bad for this nation." Well now...it looks like we'll have a fresh face to contend with in Iowa's Third Congressional District and I can't wait. I promised not to reveal until she is ready...this will be good for the nation and the 16 counties that have to put up with...David Young. One word: Toast! 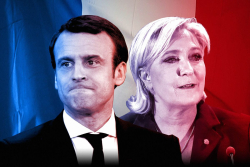 Yesterday the world was ablaze with the news that the French Election (scheduled for today) may be impacted by a data-dump and hack. Fingers are pointing to Russia. So, are they that brazen? The answer is "yes" after all it seemed to work in the U.S. The 20 point favorite is a political newcomer Emmanuel Macron who is pro-business, and pro the European Union. The opponent is Marine Le Pen who is isolationist and anti immigration. President Obama last week endorsed Macron. That, no doubt, was enough to send Russia to its keyboard. Whatever happens both candidates come from parties outside of the mainstream. Seems to be a pattern.

The Iowa Secretary of State Paul Pate is making the media tour touting the fact that we now have voter suppression in Iowa that is more outrageous than in many other states. It is a solution in search of a problem and it will cost Iowans dearly. Here is how they did it: 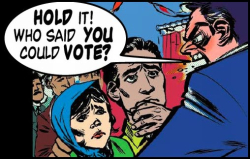 Fear. Fear is a great motivator and when you tell citizens that there is "voter fraud" even though there is not...folks get worried. They are unsure and so they cower. Here is a statement from ACLU - Iowa and its director Mark Stringer: "With Gov. Branstad signing this outrageous voter suppression bill into law, tens of thousands of Iowa eligible voters will be harmed.

This voter suppression law includes the introduction of a strict, unnecessary and expensive voter ID requirement, with voter ID cards going out to only pre-registered voters and not all eligible voters. It also includes unreliable and burdensome signature verification, cuts to early voting, and other provisions.

Politicians should not be making it harder for eligible Iowans to vote. Iowa is widely recognized as having one of the best systems in the country for elections. There has not been even one documented incident of the type of impersonation fraud--the type of voter fraud that voter ID laws are intended prevent. The only thing gained by this law is that a group of politicians have made voting harder for Iowa voters, especially low-income people, people of color, transgender Iowans, senior citizens, and those Iowans with disabilities."

Mean...just mean and at the top of the list is Sen. Charles Schneider (R-West Des Moines/Clive/Windsor Heights) and Rep. Chris Hagenow (R-Windsor Heights). Bet they have wet dreams over stuff like this. 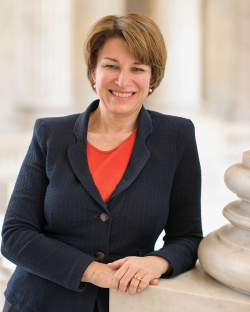 This evening, in Des Moines, is the first "Spring Event" hosted by the Polk County Democrats. The central committee made the decision to hold a spring fund raising event because...well, because they are broke and they trail the Polk County Republicans in collected donations. It's a smart move directed by a new crop of leaders and an invigorated base. The headliner this evening is Sen. Amy Klobuchar (D-MN) who comes from the Minnesota-Democratic-Farmer-Labor Party, is the senior senator there and the first woman elected to the U.S. Senate from Minnesota. Should be good...

This week I'm headed to DC on a trip organized by the Greater Des Moines Partnership. It should be interesting, informative and a great opportunity to mingle with decision makers from the Metro. I had to promise them I would not Tweet at 3am but we do have a meeting at the Canadian Embassy and I understand once there it's easier to ask for asylum. We're also doing our daily business news broadcast from there...THAT should be interesting because...we don't do politics there.

Thanks for reading and have a great Sunday and a better week!

I Can only hope that somebody will take legal action against this new voter suppression bill and that the Iowa Supreme Court will find that it is clearly a bill that violates Iowa State law.
This Type of law prevented over 60,000 people from being able to vote in Milwaukee County, Wisconsin in the general election in November. That voter suppression changed the election results for the state of Wisconsin. It Even caused suppression of rural voters in Wisconsin who would have voted for Trump but we're not allowed to when they got to the polls.