It's been quite a week. Many of us popped popcorn grabbed some sodas and took in the big TV show of the week, "James Comey Takes

On Liar Trump". It was a sight to behold...oh wait...did you know that James Comey is six-foot-eight? See what you learn here... Welcome to Sunday Morning Coffee my look at some of the news stories you have seen or might have missed all with my personal commentary. Why? Because it's fun...grab a cup and let's go!

Who Do You Trust? following the Comey testimony 26% of the respondents said President Trump was more trustworthy than James Comey. Meanwhile 46% found Comey more honest and trustworthy. I'm with the majority on this...but it shouldn't surprise you. Besides, if you look at the record...the history of these two Donald Trump comes off as a carnival barker. Such a weasel.... "Lordy, I hope there are tapes." that's about all you need to know.(Cartoon - Tim Lloyd)

Just in case you were wondering. This morning this is what Mr. Trump was Tweeting about: defends his record as president, criticizes press, Comey, and leaks --criticizes Dems --jobs, taxes, economy. And it's all before 8am. Isn't it interesting that the president has decided to conduct the business of the United States through Twitter? It's like he is on campaign mode all of the time. Just can not divorce himself from the reality TV guy he truly is.

Here is the worst part of this entire episode of our real life drama each of us lives thorough on a daily basis. President Donald Trump continues to harm the United States and its standing on the world stage. Sure he gets along swimmingly with the folks who hate us...but our "allies"? Not only that but he is making a mockery out of the Office of the President. It is embarrassing. And when the one of the first thoughts in the morning is, "I wonder what crazy shit the president did overnight." Well, you get it...sad truly sad. But, we must resist and lift up what we can that is positive.

Question: Did Karl Moyer buy the Des Moines Register? Or, does it just seem like it? Anybody know?

"Hey, Osama, go back to your own country!" 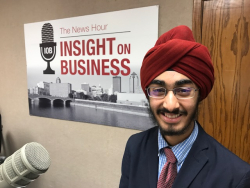 Those are the words that motivated J.J. Kapur, an incoming West Des Moines Valley High School student to action. J.J. is a Sikh and he is out to share his faith with anybody who will listen. We aired this interview on The Business News Hour last week and the number of downloads has been amazing. People, it would seem, are willing to learn. So, how did the turban become a symbol of terrorism rather than of peace? Good question. One of the first answers might be a lack of education. Again, if you would like to listen to J.J. (who by the way has won national speech contests at Emory University and Harvard) click through the link.

So Much To Do!

Yesterday I spend several hours at the Iowa Working Families Summit which was held in Ames. The number of people, surprisingly, was down. I write "surprisingly" without the knowledge that there were no fewer than two additional progressive events happening in the Metro. We can't go to everything. What is interesting is the number of progressive events that are happening and how that is energizing so many people. "Ya can't swing a dead cat and not connect with a progressive gathering in Iowa", was one of the comments I heard yesterday. If I were a Republican strategist I'd be just a tad nervous these days. 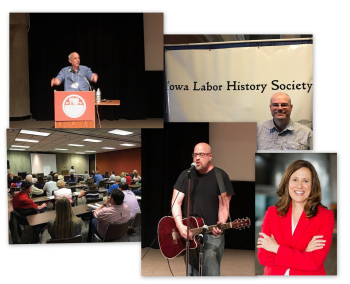 Here are some take-away thoughts from the Iowa Working Families Summit:

Bottom line...you should have been there.

Who Was in Ames?

I wish I could report to you that I saw a number of Republican candidates at the Iowa Working Families Summit but...alas...no. It's too bad, they might have learned something...and we did have air conditioning and a good meal. Some of the folks that made the trip included Theresa Greenfield a yet to announce candidate in Iowa's Third Congressional District. Democratic gubernatorial hopefuls included Jonathan Neiderbach, John Norris, Nate Boulton others may have been there but I missed them. I did see State Senator Rob Hogg (D-Cedar Rapids) there. Rob is the Minority Leader in the Iowa Senate and is working overtime in an effort to reclaim the senate and sanity in Des Moines. 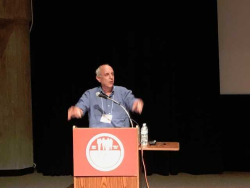 Then there was Larry Cohen

If you didn't stick around for the speech by my friend Larry Cohen who heads the organization Our Revolution you missed a great speech...he was not shy. "American's want health care not health insurance. It's a rip-off that we pay 20% of our medical dollars to companies who work to find ways NOT to deliver health care to Americans!" or this "This is about unity. It is not about dividing us but uniting us to move forward..."

If you click above you'll hear his entire speech...enjoy. You could do worse than listen...perhaps it may motivate you to get involved.

On Friday my Mother z'l would have been 97 years old. I think of her daily and remember the good times. Here's an image from a birthday party with close friends and family.

One other bit of personal news, I heard yesterday from Desmund Adams about his son Khalil. The report was than the open heart surgery this past week was a success and it looks better than prior. "We are all grateful for the support and prayers of so many. Thank you all."

Thanks for reading/listening and have a great week!

We are so happy to hear that Khalil's surgery went well.