We have a child in the Oval Office who thinks more of television than public policy and you wonder why I write Sunday Morning Coffee?

Welcome to the Holiday Edition where I'll share some stories you've seen and some you may have missed all laced with my personal, and often snarky, commentary. Hey, it's Sunday Morning Coffee...grab a cup and read on.

It's All About The Base

While the United States Senate and the United States House of Representatives attempt to figure out how to screw the working class and cut a sweet deal with the wealthy the President of the United States is captivated with women and blood. Yesterday "45" once again came out ripping away at MSNBC "Morning Joe" hosts even in the face of bipartisan criticism of his initial attack earlier in the week. On Saturday the president tweeted:

That was, of course, following his return to talking about women and blood...which also was fabricated: 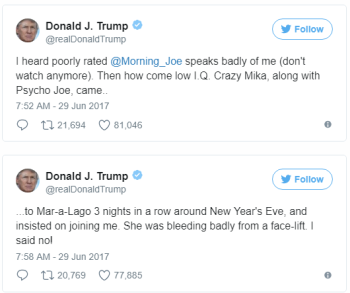 Yep, this is the guy who is leading the "free world". What a disaster and congratulations voters.

That is what we once called the 4th of July...Independence Day. Today we just give it a number and a reason to sell mattresses and cars at "deep discounts". We called it Independence Day because it reminded us of the struggle to rid ourselves of a tyrant who had nothing in 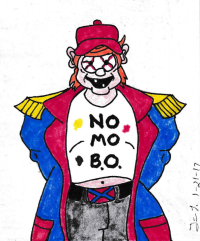 common with the people whom he ruled over. Seems like what we have going today. There is no one on the planet that is more patriotic than my wife. Yesterday she asked, with a straight face, "So how hard is it to get a Canadian Citizenship?" It's come to this. We can only hope that this Independence Day we can forge our independence from what has become the laughing stock of the planet. This revolution starts with remembering what the House and Senate and local GOP leaders have done to our nation and begin the process of removing them with the vote.

It's Been Awhile Since We Visited

You remember my friend Tim Lloyd and his creation I.M. Stupid? Seems like a great time to hear from him again: 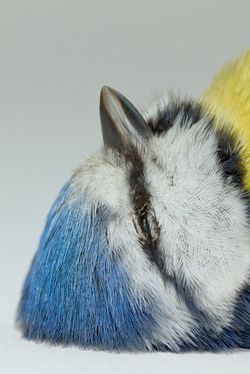 Remember when Sen. Charles Grassley (R-IA) warned Americans of the "Death Panels" that really never existed? Soon, if the Senate gets its way with America those "death panels" will be back. Not so much as Chuck pulling the plug on grandma but by gutting Medicaid and scaling back Medicare the result will be the same. What is worse is that "99 County Chuck" is too timid to simply oppose the legislation telling us that he is still studying the bill. These people can't wait to screw with the the promises of true leaders.

Your government is spending thousand chasing after a ghost. Remember when "45" lamented that he had not won the popular vote because, "...millions of people voted illegaliy"? That lie fostered an election security panel where the Secretary of State for Kansas (of all goddamn places KANSAS!) was put in charge of "securing the vote" when every voice on the matter said that lie was a lie. However this panel has requested from each state their voter rolls and over half of the states said.."Nope, ain't gonna do it." Why? Because, frankly, we do not trust you. Here is the story from The Hill.

One thing this health care debate has fostered is a renewed interest in scraping our current rip-off system of health insurance and replacing it with a system of Medicare for All. Sen. Bernie Sanders (I-VT) has promised that he will roll out legislation that would do just that...and it may have legs. Think of it this way: Medicare is expanded to provide care for each person in the United States. It is paid for by a series of taxes, doing away with the social security "cap" and more. This does not do away with health care insurance but it does make that cartel smaller. Health insurance companies can then sell "Medicare Supplemental Policies" to expand coverage on the basics. Wellness is created, doctor visits are covered and the nation can join the other industrialized countries already providing health care to its citizens. Maybe then I can talk my wife into staying here.

Today my friend Donnelle Eller from the Des Moines Register has a great article (without a conclusion) about how low unemployment in Iowa is hurting the economy. If you want to read it...here you go. The issue, she reports, is that the unemployment rate here is 3.1 percent which means it's nearly impossible to find qualified workers because nearly everybody who can work...is doing so. Yet tax receipts are down. Consumer are not spending at the rate we did pre-recession. Sure, farm income is down because of low commodity prices but that's not why folks in Fort Dodge are not spending their cash. Here is what really is going on.  Iowa prides itself on being a "low wage state" and our legislature has done everything in it's power to make sure we stay this way by rolling back the minimum wage increase passed by local governments. It is a race to the bottom. Meanwhile corporations who are raking in millions of dollars in gifts from the Iowa Economic Development Authority to create (or retain) a scant number of jobs pocket the cash and invest their winnings elsewhere rather than boost the wage rate of their workers. Last year weekly wages, adjusted for inflation, rose a meager 0.8 percent. From the story: "Last year, Iowa's real weekly wages climbed less than $10 to $864. Nationally, wages were mostly flat at $1,031 in 2016." In other words for all the hand-wringing going on among employers and the legislature they are just fine at keeping wages low in Iowa. Until that changes expect more cuts in things like education, health care and food assistance. Sorry suckers...you voted for less and now you've got it. 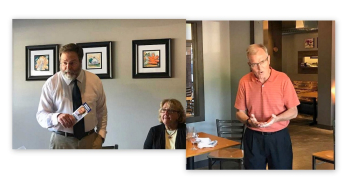 Last week I got the opportunity to listen to Paul Knupp who is actively campaigning for a spot to oust Rep. David Young (R-IA) in the Third Congressional District. His theme is Rebuild America and his focus is on infrastructure to broadband to health care. He joins a crowded field of announced candidates including Heather Ryan and Cindy Anxe. Theresa Greenfield will announce on Wednesday. I also heard from Democrat John Norris who will have an official launch of his gubernatorial campaign next Sunday. John has an impressive background in policy and government. He also has something a bit unique in that crowded field...Norris is lifting up his rural roots and going right after the value systems of Rural Iowans. Yesterday Davenport City Council Alderman Mike Matson ended his campaign saying that raising millions of dollars was too large a mountain to climb. Mike is a great person and I'll miss him on the campaign. This will be an interesting season.

This Independence Day I get to walk with not only the Urbandale Democrats but also the Windsor Heights Democrats in back-to-back parades. Should be a great opportunity to show some unity and strength.

Meanwhile the Iowa Democratic Party lost it's chair. Derek Eaton the newly elected party chair announced this week he is stepping down for health reasons. His position will be filled, for the next several weeks by vice-chair Andrea Phillips. A special election will be held on 22 July. Loads of names being mentioned including Matt Paul, Bill Brauch, Chris Hall and Laura Hubka. Whatever is decided we need to remember to march lock-step and renounce what is ruining our great state.

Today I get to write a letter to the Windsor Heights City Council and the Des Moines Register in support of sidewalks. I honestly can't believe that something like this needs to be done...really I can't. I understand change is difficult for some...ask Galileo.

Thanks for reading...have a great holiday.

As far as low unemployment and low wages goes. To paraphrase Field of Dreams, "pay the wages, and they will come".