If it's Sunday you've gotta get your coffee! My name is Michael Libbie and I get to write Sunday Morning Coffee a look at some of the news

stories you've seen and, perhaps, some you have missed. Each laced with my personal comment...it's what I do on Sunday mornings. If this is your first visit...Yay! If you are a regular consumer of SMC welcome back. Let's get started:

My morning started out with a piece from the Detroit News ("home boy" you know) about Darren Walker the president of the Ford Foundation. In a blog he authored he called on leaders to demonstrate moral courage by speaking out in times of crisis especially in light of Charlottesville, racial issues that hobble our nation and the prevailing troubles that come from the elimination of 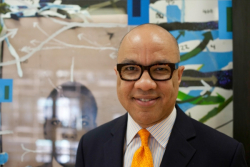 DACA. And he doesn't leave anybody out:

“Too many of our leaders remain uninterested in healing the wounds of discrimination and prejudice, injustice and inequality. Our ideals have been hijacked at the highest levels, perverted by narcissism and selfishness,” Walker writes. “At the ballot box and in our digital public square, too often, our leaders are rewarded for practicing the divide-and-conquer, dog-whistle politics endemic to our modern era.”

But, he's not done. He puts those leaders of non-profits and civic organizations on notice to actually do something:

“In philanthropy and civil society, we have also been slow to recognize the ways our systems discourage moral leadership. We foundations often hide behind the particulars of our missions, rather than standing up for the deeper values our missions embody. We keep our heads down to avoid making our organizations targets for criticism, especially in the era of social media warfare.”

You, yes you...have a moral obligation to speak up against hate and corruption and evil. It does not matter if you are the local chamber or the local church it is, in the words of Darren Walker, "Your responsibility to act" because confronting inequality and systematic injustice is about right and wrong. It is neither Democrat or Republican. Get busy this is no time to shrink from what is right.

Somebody explain this to me... Last night about 600 of the faithful gathered for the annual Faith and Freedom Coalition fund raiser and gave resounding ovations to anybody who praised "45" and the wonderful things he is doing to "save our nation". Let that sink in for a 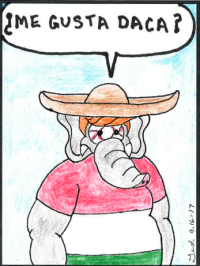 moment. Here we have "evangelicals" lavishing praise on a man who has done and continues to do abhorrent things and these "Christians" think he's great. Look, this is an open forum...please explain that to me. I do not understand but then again maybe they should spend
more time actually reading their bible than quoting it. Weary... If you want to read the story here is the piece from my friend O. Kay Henderson and Radio Iowa.

He is back! Our political cartoon from Tim Lloyd speaks to how "some" in the GOP have all of a sudden seen DACA as a good thing. Not all mind you. Our friends who were praying loudly were no doubt praying that "those people" need to be deported so that "Real Americans" could work in the packing plant or the motel or the nursing home or...you go ahead and fill in the blank. (Cartoon: Tim Lloyd)

The Iowa State Senate and Sex 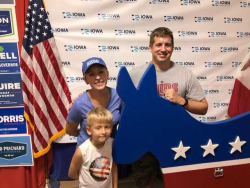 communications director for the Senate Republicans. After all if "45" can get away with it what's the big deal...right? Except one of the men named in the trial that awarded Kristen $2.2 million for being fired after she complained of the constant harassment just resigned from his GOP job. The key word is "just". It took this long for the "Faithful Republicans" to oust Jim Friedrich who, according to Anderson, used vulgar language and sexual innuendo on a regular basis including watching out the window and giving "hot chic" reports when female lobbyists entered the capital. Maybe we should pray for him...  BTW - That is a photo of Kristen and her husband when they BOTH switched their party affiliation to Democratic during the recent Iowa State Fair.

A Shout Out to the "Fighting Fourth" 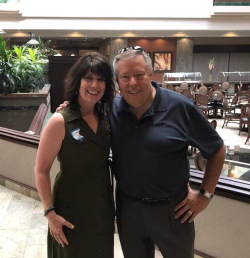 Last Sunday I had the opportunity to visit, at some length, with Leann Jacobson the businesswoman from Spencer who is hoping for an opportunity to crush Rep. Steve King (R-IA) (who by the way was busy praising "45" at that fundraiser last night) in 2018. The Fourth Congressional District race isn't as crowded as what we have here in the "Thirsty Third" (Thank you Robert Becker) but it should pull out lots of activity. I offered Leann some names of activists in her (very large) district and I hope you'll give her some time and some effort in this race. I think you will like what you hear.

So, what was she doing in Des Moines if she is running in Northwest and Central Iowa? She was meeting and greeting during a very successful Progress Iowa Corn Feed. It's what we do.

There Is No Doubt...

Iowa. We have a complete and total disaster on our hands when it comes to fiscal irresponsibility, our natural resources, jobs, wages and education and Gov. Kim Reynolds (R-IA) has her finger print on the entire mess. With us at the Progress Iowa Corn Feed was Cathy Glasson, who by the way, stayed for the entire event, Fred Hubbell who gets better and better on the stump, Ross Wilburn who is new to the race and former Mayor of Iowa City, John Norris who knows policy and rural issues better than anybody, Jon Neiderbach who is a champion of equality and fiscal responsibility, Andy McGuire who has become a leading voice on health care and articulates that message well, Nate Boulton who has a compelling story and broad union support and Brent Roske who is running as an Independent and who gave some solid reasons as to why.

I thought it was magnanimous of my friend Matt Sinovic to include Roske in the mix. It shows a fairness of thought.

Then there is the Polk County Democrats who, on a vote by a committee and not the body, decided to ban Third District hopeful Heather Ryan from speaking at the upcoming Polk County Steak Fry. The embattled chair (or so I am told) Sean Bagniewski tells me that debate on this issue will come before the Polk County Democrats tomorrow during our regular meeting. Heather repeatedly called Rep. David Young (R-IA) an asshole during the Democratic Wing Ding last month. That didn't set well. Oh...so what is Heather doing? She told me she is "moving on" and holding her own Free Speech Wiener Roast at the same time as the Steak Fry. It's classic Heather Ryan and if you want to go here is where you can RSVP.

Meanwhile the Polk County Democratic Steak Fry will be held on Yom Kippur the holiest day of the Jewish Calendar. It's a complete fast day so even if I could go I'd have to say no to the (non-kosher) steak. Good planning huh? I'll be with my congregation in Mason City. The Democrats in Polk County have said they will be "more careful about planning in the future". They could, as the IBEW did during the Labor Day Picnic, offer up some Hebrew National Hot Dogs at next year's event.  Hey, I'm just trying to help and I'll pray for you. 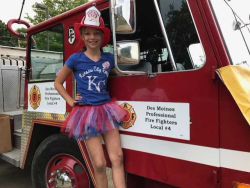 Is there a better parade than the Beaverdale Fall Festival Parade? No, really, it's got real bands, some cool displays, horses and candy! We went along yesterday and walked with Skip Moore who is in a fight for his Des Moines City Council seat and it was great to see so many people lining the route. Best deal was that my granddaughter Jovie got to throw candy from a real fire truck. She's becoming quite a "parade pro".

It took me a day longer than I thought to file my papers for the Windsor Heights City Council election coming up on 7 November. It took a day longer because I was waiting for Rosemary to get back the the 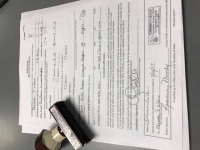 Polk County Election Office...she had Monday of last week off. You see it is Rosemary who notarized my signature. The rules are that to become a candidate one must have 18 signatures on the nomination petition. I had over 60. That's not bragging but it does mean that I spoke to lots of people prior to becoming an official candidate. I find getting out and listening to be one of the best parts of campaigning. You hear lots of stuff going door-to-door.  If you want to keep up with that process you can tune into my Michael Libbie Election Blog here.

OK...I gotta go!  Thanks for reading and have a great Sunday!