While you were sleeping the coffee was brewing. Welcome to Sunday Morning Coffee! My name is Michael Libbie and I get to write this

political blog about stories you've seen or might have missed all laced with my commentary. Sometimes fun often serious but mostly meant to inform. Grab a cup and let's wade through what we know and what we can only suspect.

This weekend I was sitting with four people who voted for "45" in November. Shocking, no? I know this because they freely admitted to the act, mostly as if they were at confession. I know all four of these folks well. Two are retired with one on Medicaid and two are actively working at what might be called blue-collar jobs. The one thing they share is a deep faith in evangelical Christianity  When I asked "So, how is all of this working out for you?" I got the same answer, "I held my nose and voted for him because I didn't like Hillary." That was the common thread. The other was that they are disappointed in how "45" has conducted business. Would 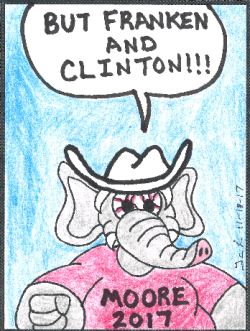 they vote for him again? "It depends on who is running against him." I then asked about Alabama and Roy Moore...

My four friends said they are not sure if Moore, who was booted out of running the Alabama courts twice, is guilty or not of molesting children. One said they would offer him the benefit of the doubt the other three others said they didn't know enough about the case to offer an opinion. But they were quick to suggest that, "They are ALL guilty of something!" I hear this a bunch. When confronted about the failure of the GOP to deliver on anything other than Jesus (and they fail at that too) many who voted for "45" simply play the "AltGuilt" card rather than face the reality they actually voted against their own interests. When I asked about the tax cut plan being laid out in Washington they said it was not a good idea because it favored the rich over the working class. At least they got that right. (Cartoon: Tim Lloyd)

Write this down someplace. Roy Moore will win in Alabama because he is running in Alabama.

This weekend former president Bill Clinton said he doesn't think the public outing by former FBI Director James Comey about the re-opening of the email investigation on October 28th cost Hillary Clinton the election. The master of words did say it only made a difference because the public had been so ginned up by the story. "If the voters hadn't been told that the email...was the most important issue since the end of World War II, I doubt the FBI director could have flung the election at the end." He has a point. The GOP used that story over and over and over...remember "lock her up"?

It's pretty stunning that my friends in the Orthodox Jewish community support folks like "45" and Roy Moore. Oh, you didn't see the rabbi fawning over Moore last week at a rally? That was shocking...to a point. One of the things most folks don't know is there is a very strong bond between the Orthodox Jews and the Christian Right. The reasons? Abortion, Homosexuality and the strong tie between Israel and Jesus. You see, for the "Second Coming" to happen there must be an Israel. Which begs the question, Why would G-d need a second chance?  Anyway my friends seem to forget the rest of the Torah. You know, those pesky parts about caring for people, all people and that grabbing pussy isn't nice. 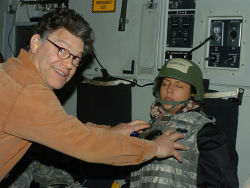 Which Brings to Mind Al Franken

Now it's one of ours. Are women to be...believed? It's an honest question. For centuries it has been suggested that women lack the ability to simply tell the truth while men, it is assumed, are always spot on. I'm not making this up. (More on that in a moment.) The #MeToo movement has heated up yet many deny the ability of women, who come forward to out their attackers, to tell the truth. There are "doubts". Unless you have "proof". Why is it that we fail to believe women who, at great risk, come out and share their stories about these sexual attacks? Could it be the same inbred hostility that denied women the right to vote because they would never be able to understand the complexities of politics? It's not a stretch. Here is an amazing article from The Atlantic that details centuries of doubting women because...well...because they are...women. Al, sorry pal, you blew it. And, of course, "45" could not help himself...

Last month I had a long conversation with Polk County Sheriff Bill McCarthy about his jail. We talked about how it has become the first stop for the vast majority of people who have been involved in crime and suffer from mental illness. NAMI Iowa held a forum last week that talked about the sorry state of mental health in Iowa. Last Friday my friend Dave Price from WHO-TV13 hosted a televised forum on mental health. On December 5th there will be a mental health forum hosted by the Des Moines Register and Des Moines University. We talk...a lot...about mental health and then do...nothing. It's sort of like guns. We talk a bunch about the murders in our nation (mass or those pesky 'one-offs') and we do nothing. Nothing. Don't you think it might be time for us to vote for mental health rather than just talk about it? I know many of you who read this post attend political events. Why not ask the question the next time you are face to face with a candidate, from any political party, what THEY intend to DO about the 900 pound gorilla in the room. I don't care if they are running for what office. Make them answer the question and not simply talk about it. 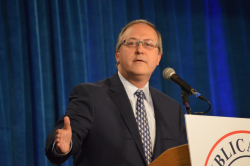 It's true, Rep. David Young (R-IA) can tell a good joke. I've seen him in action. He is also really, really good at voter outreach. He should be having worked for Sen. Charles Grassley (R-IA) for years. He also doesn't give a damn about you, your family, your ability to put food on the table. If he did he would not have voted for the GOP "money grab" last week that will continue to cripple Iowa families. The same is true for Rep. Steven King (R-IA) and Rep. Rod Blum (R-IA) they simply do not care. One of the things that voters don't know is that these guys are much more concerned about getting re-elected than being straight with voters. Cut the corporate tax rate, when the vast majority of corporations don't pay anything close to the tax rate. Repeal the estate tax because rich folks will benefit. It's all about the money and rich donors that foot their campaigns. 2018 can not come soon enough but we need to work it every day...every single day. (photo: Iowa Starting Line) OK, time to get into the weeds a bit. Perhaps you have heard the U.S. Central Bank (The Fed) has, as one of it's closely watched benchmarks, the inflation rate. They say they three things; the unemployment level, the economy and the inflation rate are what they are watching so they may raise interest rates from historic low levels. Of the three it is the targeted inflation rate of 2% that eludes them. The Fed just can't figure out why the inflation rate is stuck below 2%. But, it's not and anybody that actually buys stuff knows it. You see the inflation rate is calculated by averaging some 300 categories of goods and services. When we start to look at specific costs, and who is buying what, we get a better picture of inflation at the personal level. For example if you are a man and buy shirts and sweaters you know prices in 2017 are down by 8.3%. If you buy fuel you know that that has risen by more than 10%. If you buy health care insurance you know that it has risen. Rents are up by 3.7%. Entertainment is up by 3.1%. So, what is holding back inflation? Slow wage growth. Wages today are 1.7% below what they were in 2009. Yet corporations are sitting on vast amounts of cash. What are they doing with it if not increasing wages? Reinvesting in stock options and handing out huge bonuses to management. Never mind...sorry I brought it up. 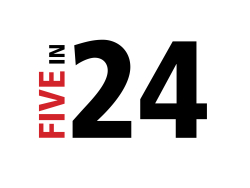 I'm writing a book. I had a long conversation with my friend Dave Price last Wednesday (Dave is writing a second book) and I shared with him my struggle in writing a book. I had, last year, considered writing a book on marketing/advertising/branding and calling it "Five in 25 - Five Things Any Business Can Do in 24 Hours to Recharge their Brand and Sell More Stuff". It comes from the title of a presentation I've done for several years. But...it seems that everybody already knows everything about advertising/marketing/branding. Doubt it? Just ask them. No really...from professional services to retail the people making or selling stuff already know everything they need to know. Even if they don't. So...

The book I'm working on is titled "You Don't Know Whatcha Don't Know" - 100 Things You Don't Know But Think You Do" or at least that is the working title. This should be fun.

Thanks for reading!  Stay safe out there!

I wish my corporation was sitting on huge amounts of cash... our wages are not below 2009 levels far cry they are significantly above that! #fakenews

Hello "Mike" congratulations and I suspect you also are not paying corporate taxes of 35%. If you are, contact me I can find you a great accountant.