news stories you may have seen or, perhaps, missed along with some commentary. Sometimes fun sometimes not-so-much but it is worth your time. Grab a cup and let's get started! Oh, one other thing...remember when it snowed in Iowa?

On Thursday the FCC stuck a dagger into the heart of Rural America when they voted to end what has become known as Net Neutrality. The FCC voted along party lines to squash the Obama Administration rule that said the Internet should be regulated just like other basic utilities. Already much of the rural parts of our nation are lacking high-speed connections and this decision could make that worse. Then there is putting all the power into the hands of Internet Service Providers (ISP's) to create fast and slow lanes. If you've got the cash and can pony up to put your website on a "fast lane" your business won't suffer the "buffering wheel of death". If not...sorry sucker. Congratulations to the Trump Administration for pandering to your base...oh, wait...maybe not so much? 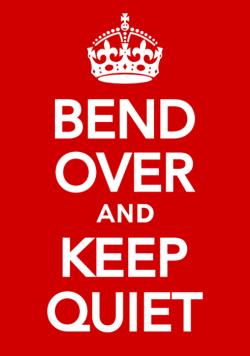 Get ready to bend over. For those of you who follow my daily business news broadcast Insight on Business the News Hour you know we do a daily market report. You know, what happened on Wall Street and why. So, perhaps unless you are also tracking the markets, I might have a pretty front row seat to the GOP Tax plan and exactly who it will benefit. Here is the deal: Whenever there was any doubt that the tax cuts proposed by the Republicans looked to be in jeopardy the stock market took a hit. When it looked like, as it did on Friday, that it was going to be clear sailing for the tax cuts to major corporations the markets went wild. Now, let's pause for a moment and consider your investment portfolio. You do trade in the markets on a daily basis...right? You are pushing your business profits into buying your own stock...right? Oh, no? Hmmmm... Well those that do are giddy that you are going to pick up the tab for their plush life and the $1.5 trillion it will add to the deficit. And know what? They are not even trying to hide it. They do not care and you are going to get screwed. Unless. of course, you think getting an $800 a year tax break (maybe) is just ducky.

While many of us were surprised at the outcome of the U.S. Senate race there don't pat 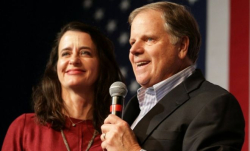 yourself on the back too hard. Senator-Elect Doug Jones (D-AL) is a gift and a lesson in hard work, getting out the vote and what happens when the GOP puts up a lousy candidate. We can all learn something about hard work, messaging, getting the right candidate at the right time but the fight is not over. There is 2020 coming up and the Alabama and RNC will not take this defeat easy. Look for a solid Republican to challenge Jones in two years...and win back that seat. It will happen IF we let one day go by where we're not working it to save this nation from the evils of the GOP. By the way this victory came on the first night of Chanukah and the 25th Anniversary of the marriage of Doug and Louise. Nice! (Photo: Louise Jones & Doug Jones - BBC) 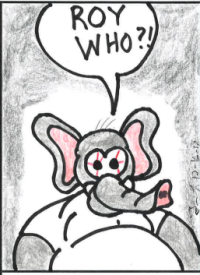 Notice how long it took for the Christian Right and those followers in the GOP to distance themselves from Roy Moore? Correct...they didn't. These are the same people who voted for a thrice married, adulterer who bragged on tape that he grabbed women by "the pussy". Who has lied his ass off on a regular basis, has more then 10 women accuse him of sexual harassment...the very same people. You have to understand Christian Family Values stop when it comes to their own. Last week the CEO of the Iowa based Christian based Family Leader was on public radio talking about the sanctity of marriage and the perverse nature of people who are LGBT and how it is the church and only the church that stands in the way of our nation falling under the spell of Satan.

Uhm...you already have and he is sitting in the White House. (Cartoon - Tim Lloyd)

While we were celebrating the Jones win in Alabama we got beat here in Iowa as GOP State Representative Jim Carlin (R-Sioux City) won an open Iowa Senate seat over former school superintendent Todd Wendt of La Mars. However, and this is important to note, in that district there are 17,677 registered Republicans, 8719 registered Democrats and 13,117 no-party voters. Yet for all of those lopsided numbers Wendt lost by only 603 votes. This special election could have been a win for Iowa Democrats if we had flooded the area with volunteers. True the campaign lasted only about three weeks but...as we saw in Fairfield last fall it can be done. Trouble was hardly any Democrat I spoke with over the past week knew anything about the race. In his win Carlin beat the drum for tax reform for business saying, "Iowa needs to be more business friendly!" Parroting the lie being told about corporate taxes here. While it is true our 12% rate is the highest in the nation very few, VERY FEW, corporations pay that rate. If they do, they need a new accountant. What else can we expect from Carlin? The usual crap-storm from the Republicans: "pro-life efforts and more choice in education". 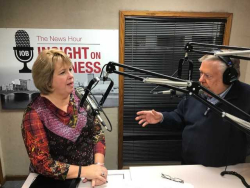 While business groups like the Greater Des Moines Partnership and the Iowa Chamber Alliance are pushing hard for "tax reform" (See above) they are mostly silent on what has become one of the biggest drains on business productivity in Iowa. Nobody seems to want to talk about how poor our mental health care is. Nobody wants to talk about how Iowa is dead last in the nation with regard to the number of state mental health beds per 100,000 residents. Nobody there wants to talk about how massive tax gifts to already wealth corporations have drained our state budget to the point that we are letting people die on a regular basis because of the lack of treatment. Nobody... Look, I am a business person, I do a business news broadcast, I am all in when it comes to capitalism. But capitalism without heart is evil. If you've got ten minutes take a listen to this radio conversation I had with Peggy Huppert from the National Alliance on Mental Illness - Iowa Chapter. At least we are talking about it.

Last week we learned that Gov. Kim Reynolds (R-IA) will stay cozy with Congressman Steve King (R-IA) who is one of the biggest embarrassments in the Hawkeye State. Like "45" King blasts away with racist remarks, outlandish comments, support for Confederate ideals...the list gets long. Yet the people in the 4th District seem to like him and that is exactly why Reynolds is keeping him on her campaign team. Birds of a feather it would seem. Let that sink in for a moment. Here is a prediction: Reynolds may win the upcoming primary against former Cedar Rapids Mayor Ron Corbet but it will be bruising and it will sow enough doubt in moderate Republicans, thinking Independents and Democrats to sweep her out of office next year. Write it down...but we've got work to do. 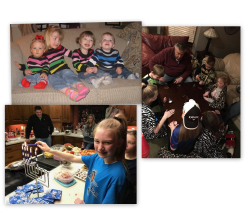 Today is the 5th day of Chanukah. If you are celebrating may your light shine brightly. If not...well, heck it's a great story of how the weak kicked the ass of the powerful. You can leave it at that and, if you want, make something political out of it.

The photo of the four kids was two grand-children and seven years ago...last night I got to play Dreidel with all six of them. Now THAT was worth everything.

BTW - My Bride has knocked herself out creating a holiday home for everybody. Sort of the way it should be?

Have a wonderful Chanukah, Sunday and week....shop a bunch...the economy is counting on it!