Where does one begin? It's been another wild week from DC to Hawaii. Welcome to Sunday Morning Coffee my weekly political blog with

some of the stores I know you've seen and others you've perhaps missed; all laced with my, sometimes, acerbic commentary. Why? I dunno but I'mm sure glad you take the time to give it a quick read. Let's get started!

The Office of the President of the United States

At one time in my life I remember telling people who hated George W. Bush that is was not right to defame the president. That we can disagree with him but to cast hateful stones was not in keeping with honoring the office. All of that has changed over the past year. We now have a person who is a clear and present danger to our nation occupying the White House. His most recent "Shithole" comment should be enough for Republicans to disavow him but they do not. Why I do not know...they must be scared. However there is a line coming out of the GOP and this administration that could become useful for you any time someone asks you about why you hit somebody or why you make disparaging remarks to your boss or why you do anything that is inappropriate like grabbing someone by the genitals. Just make like Sen. Tom Cotton (R-AR) or Attorney General Jeff Sessions and say, "I have no recollection...." Fill in the blank. It's your "Get Outta Jail Free Card". You are welcome.

But you do have to love the First Amendment. The video above, complete with Poop Emojis was, last night, projected on the Trump Hotel in Washington, D.C. 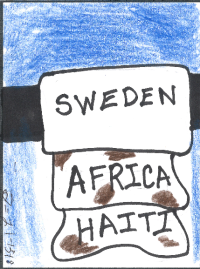 Clearly that is what "45" meant when he offered up his comments about Haitians and the entire continent of Africa. "Bring us more white people, enough with all these colored folk. They are not the type of people we need in this country..." Is what he meant to say. And, where do we start? How about "Normay" (as the White House spells Norway) or how about Sweden? Those are countries where there are lots and lots of white people. Trouble is...Norwegians and Swedes wouldn't want to leave their highly developed nations to come here where a mad-man is living in the White House.

Speaking of mental health how about this comment on ABC News this morning where mental health professional Dr. Allen Frances said about "45": "It's an insult to the mentally ill to say that the reason he shouldn't be in office is mental illness. He's a bad person, he's an ignorant person, he's impulsive. He's been like this his entire life." (Cartoon - Tim Lloyd)

Maybe you missed this one. Last week the Department of Education decided to hire two firms collect from you deadbeat people who owe student debt. It's a contract that could mean millions of dollars in profit. The funny thing is that one of the companies, Performant Financial Corporation is a company that Education Secretary Betsy DeVos invested in just prior to becoming the Secretary of Education for the United States of America. The contracts are worth an estimated $400 million bucks. See you chumps...THIS is how it's done. And you're working 50 and 60 hours a week. They are laughing at you.

Birther Joe is Back!

And there is this tidbit from Arizona where pardoned Birther Senate Candidate Joe Arpiao said about the error in Hawaii that sent out a warning of an incoming ballistic missile alert last week. He was pointing to the state and saying about the "fake birth certificate" of President Obama. "They can't even solve that case. There is something wrong with their (Hawaii) government." Gosh, maybe it's all them Asian looking people? 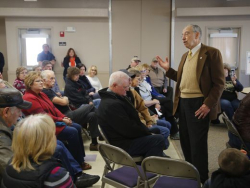 Yesterday Sen. Charles Grassley (R-IA) kicked off his traditional 99 County Tour. That is, for those of you reading from outside Iowa, what the Senator likes to say he does. Except that he really doesn't do public events in all 99 counties. He, for example, avoids Polk County (Des Moines) like the plague and holds invite only events there. But I digress... Sen. Grassley was in "Trumpland" where voters in Harrison County went for "45" by a 65% margin and where, yesterday, he was peppered by those good white Republicans with questions about the stability of the president as well as if Grassley was stonewalling the Russia investigation.  If you want to read about it here is a link to the story by Des Moines Register reporter Jason Noble. They be getting feisty out there even in the "safe" areas. (Photo: Des Moines Register)

Blah, blah, blah...it's just talk and talk is cheap here in Iowa where we rank 49th in the nation in the number of state mental health beds. Everybody is talking about it. Business groups hold panel discussions, advocacy groups hold town hall meetings and political forums where people gather and...talk. Blah, Blah...Blah. What? Put more money into caring for people with mental illness? Treat mental illness, as Dr. Andy McGuire says, "like the disease it is"? Nah, let's just talk about it. What the Iowa legislature should do is tomorrow carry forward legislation that puts money into care and treatment programs. But, nah... Let's continue to fill our jails and prisons with people who are sick but that's the only place we have for them. Makes total sense. Weary.... 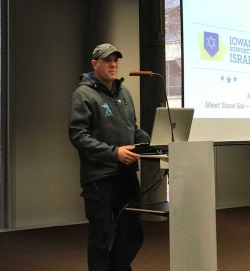 Last week I was at an event put on by Iowans Supporting Israel. It is a non-partisan, non-profit, group put together by Democrats and Republicans who...well, support Israel and Iowa ties there, and here. The speaker was Steve Gar and while I had my audio equipment with me I failed to catch his entire presentation. Steve is what some have dubbed "The Jack Bauer of Israel". He is a counter terrorism specialist who is on call 24/7 to respond to terrorist attacks there. It was spellbinding. I was able to capture this short interview for the Business News Hour. If you listen you'll note that it comes to a very abrupt end.

Finally, if you have not yet picked up Promise Me, Dad by former Vice President Joe Biden...do it. It is an amazing read.

Thanks for reading (and listening) and have a superior Sunday!