Welcome to a post about politics, religion, sex. Well, maybe lately it seems. Often serious, sometimes not but Sunday Morning Coffee is

always...hot! See what I did there. Go ahead read it again...rhyme. I know...right?  It's been another amazing week especially if you are a Republican...the hits just keep coming. So, let's not delay let us dig right in...OK? (See another rhyme...can't help it today.)

When Vice President Mike Pence was in Israel last week he answered a question regarding the relationship between "45" and Stormy Daniels by saying that he was, "not going to comment on the latest baseless allegations against the President." Which is interesting. However, while the media and much

of the country is talking about it we're asking the wrong question. The question should be, "Why did Trump's personal lawyer set up a company in Delaware to then make a $130,000 payment just weeks before the 2016 election to...Stormy Daniels?" If the allegations are "baseless" why would that happen? Or is the president that generous with his money that he randomly shells out six figures to folks on a whim? Yeah....Why?

White Evangelical Christians You Have Brought Shame on Your Faith

I did not write it, however, I thought it was spot on. As white preachers contorted themselves into human pretzels finding a way to laud and forgive "45" for being the scum he is John Pavlovitz wrote this great article, "White Evangelicals, This is Why People Are Through With You". Here I offer you just a taste: 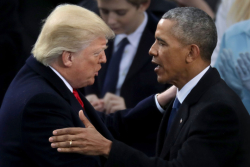 "For eight years they watched you relentlessly demonize a black President; a man faithfully married for 26 years; a doting father and husband without a hint of moral scandal or the slightest whiff of infidelity.

They watched you deny his personal faith convictions, argue his birthplace, and assail his character—all without cause or evidence. They saw you brandish Scriptures to malign him and use the laziest of racial stereotypes in criticizing him.

And through it all, White Evangelicals—you never once suggested that God placed him where he was,
you never publicly offered prayers for him and his family,
you never welcomed him to your Christian Universities,
you never gave him the benefit of the doubt in any instance,
you never spoke of offering him forgiveness or mercy,
your evangelists never publicly thanked God for his leadership,
your pastors never took to the pulpit to offer solidarity with him,
you never made any effort to affirm his humanity or show the love of Jesus to him in any quantifiable measure.

And yet today, you openly give a "mulligan" to a white Republican man so riddled with depravity, so littered with extramarital affairs, so unapologetically vile, with such a vast resume of moral filth—that the mind boggles."

If you would like to read the entire piece by Pavlovitz here is that link. It's worth your time.

And, you wonder where atheists come from? Check the mirror.

Let's Get Watered Down...

Last week the Iowa Legislature gave Gov. Kim Reynolds (R-IA) a gift. She said in her State of the State address that she wanted a "water quality bill to be the first piece of legislation" she signed and POOF...as if by magic she got one. You could tell by the speed in which it was rammed through the legislature that the fix was in long before the ink had dried on her rough draft. The water quality bill does nothing, nothing other than re-direct funds into a sinkhole (stink hole?). There is zero accountability. There is zero water quality testing to see if anything is working. There is zero transparency because the funds that are given out are given out in secret. However she and the GOP can now put on their mailings and TV ads that they have done something to clean up the stink that is water in Iowa. Well played.

Here is another good one. Last week the chair of the senate appropriations committee Sen. Charles Schneider (R-West Des Moines) said that cuts must happen to fix the budget that he and his cronies have trashed. So the answer to this crowd is to cut funding to community colleges, universities, human services. The governor is all in, the senate is all in and the house wants to cut more out than the senate. That brilliant decision comes on the heels of this much lauded Future Ready Iowa jobs program. OK...so we have this really nice website with some really nice graphics and some, predictable, sponsors and let's cut funding for the very educational opportunities that are supposed to do the training.

I'm telling you these people do not have a clue and they are throwing crap on the wall as fast as they can. Time to move them out. It was a pretty big week for Sen. Charles Schneider (R-WDM) as he heaped praise on something called a Convention of the States. I won't bore you with the sticky details but it's a bat-shit crazy idea. I've got a video cooking on this and will share next week...but the basic premise is that the federal government is bad and folks in the states can run things better. You know like voting rights. Hell if we don't want to let some folks vote we'll just give the finger to the law. Or like the Federal Drug Administration or rules proposed by the EPA or
OSHA or any number of things that are here to protect our lives. And...health care? Iowa is doing a bang up job in farming out health care to private for-profit corporations. Right?

Chuck need only look out of the window of the capital to see the Iowa Solders and Sailors Monument honoring those who fought and died in the Civil War for...what? Not "states rights" but for the preservation of the Union. Iowa delivered more solders, per capita, of any state that participated in the war. They are turning over in their graves. However it's not surprising...Charles is just doing what his puppet masters tell him to do.  Nice huh?

Yesterday was the Annual African American Celebration known as I'll Make Me a Dream in Iowa. It was held at the Iowa Events Center. Last year the management demanded that all folks who went must enter through a specific door for "security reasons". That walk had families stroll through an army of uniformed and plain clothes police. I'm sure it was for "community policing". I called out the Iowa Events Center management for what it was and they shortly lifted the ban.

This year it was worse. There were two major events happening yesterday. The entrance to those events were less than 50 feet apart. One event was the Bike Expo where hundreds of folks saw more spandex than ever thought possible. The other was the African American Celebration with music, prayer, food, community projects and businesses eager to share their opportunity. I was at both. But there was a major difference if you wanted to go to the black event. Take a look:

If you pay close attention the folks that are going into the Bike Expo are not searched. They, and I, walk right past security into the venue. Contrast that with I'll Make Me a World in Iowa where the bags are searched at tables that look like TSA. I noticed the difference and asked the organizers of I'll Make Me a World in Iowa if they had requested additional security measures. Kevin told me they had not and they were told it was standard procedure for events. Uhm...except it seems as if it is not. I asked him about that and he told me others had brought up the same issue.

The people who were going to the African American Celebration were a wide selection of families. There was no alcohol being served, unlike next door. So, what gives?  Maybe somebody can answer that for me? Or maybe the answer is something we really don't wish to confront. 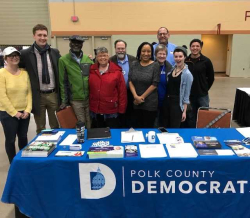 Yesterday I got to spend time at the Polk County Democratic Booth talking to folks, getting people registered to vote, talking politics and just meeting and greeting people. It's always a great time and we had lots of volunteers. From Angie who had never volunteered for something like this and has committed to being a precinct chair on Caucus Night on the 5th of February to seasoned veterans like Kerry Bowen. (red coat) Early in the day we snapped this image of the people who volunteered to come by during that two hour shift. Impressive and it speaks to the energy we're feeling, not only in Polk County, but across the state.  Thanks for letting me work with you.

And then there was this... It's no secret that I support my friend Theresa Greenfield in her run for the United States Congress. She will make a great federal legislator for any number of reasons but let me 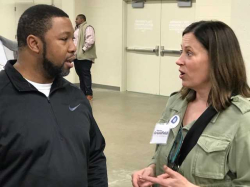 highlight just one. Her ability to connect and really listen to people is inspiring. After spending time in the booth I asked Theresa if she would like to walk around and meet some people. So, we went out to meet and greet.  Now, this ain't my first rodeo and I've seen many, many who run for public office work a line and shake hands. Theresa is different. We spent an hour walking the line of folks waiting to get something to eat. She took her time, asked questions and then listened...really listened...to the answers. Where she could, she offered words of encouragement or direction and it was all sincere.

I was able to snap a few photos, which I shared with the campaign. People in the Third Congressional District have a choice to make in June. I hope you'll give Theresa your support. She will be good for Iowa and the nation. Here is her website...let's do this!

That's it...this is starting to read like War and Peace!  Thanks for reading and have a great Sunday!

IMHO I think the huge issue this election cycle will be "Where did Iowa's $927 Million Surplus go?"

A high powered program will be at the Wesley Hall of Collegiate United Methodist Church in Ames for this Panel Discussion. Learn how the the $927 million budget surplus Iowa had in 2013 disappeared under the Branstad/Reynolds Administration. Vilsak and Culver built up a $927 million Surplus that spendthrift Repubs gave to corporations in only 5 years.

As always, Michael, your commentary is thought-provoking. Thanks for that.

You'll be interested to know we're holding the next in a series of Community Conversations at the Library Monday, January 29 at 5:30 on how long/if our three school districts can survive population decline soaring all over Iowa, including metro districts. You know our drumbeat: Iowa needs people. This is part of a national civic engagement project by the American Library Association that encourages people to talk THROUGH "wicked" topics communities should/must face, rather than talk ABOUT them at coffee or in break rooms. Hope it's standing room only.