Sure, later today you'll be getting your Super Bowl on but in the meantime we've got to warm things up with a little Sunday Morning

Coffee the Geraldo Edition. Inside our pot you'll find enough political junkie information to see you through a cold February day. So, what are we waiting for?  Let's go!

On April 21, 1986 Geraldo Rivera hosted a two hour live special, "The Mystery of Al Capone's Vault". The much hyped show was going to reveal "great riches and/or dead bodies" on live television. It was so important that there was a medical examiner on site, should bodies be found, and agents of the Internal Revenue Service were there to collect any of Capone's money that might be discovered. It was the most

watched syndicated TV program of the year with over 30 million viewers. In the end the "vault" yielded some empty bottles. After the show Rivera was quoted as saying, "I guess we struck out".

Fast forward to 2018 and the much hyped Devin Nunes House Intellegence Committee Memo that had the right all ginned up for fixing the Trump-Russia investigation. Talking heads from Sean Hannity to Rush Limbaugh worked their minions into a frenzy promising that "heads would roll" and that folks were going to be "locked up" following the tell all release of The Memo.

In the end...empty, dusty bottles.

However Geraldo also plays a part here. Last week on the Sean Hannity Show Rivera said, "Nixon would never have been forced to resign had you been in your current state in 1971." And that, my friends, is all you really need to know to understand the depravity of the GOP and their followers.

Oh But Wait - There is More!

Meanwhile the wildly popular Rep. Devin Nunes (R-CA), who won his district in 2016 by a whopping 67%, is facing another battle. The main challenger to his seat, Andrew Janz, has raised $130,379 in the days since The Memo was released. And what is more interesting is that amount of money has come from 4,000 individual donors.

Sometimes karma is a good thing. 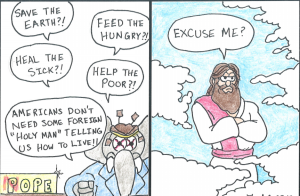 Except he really doesn't. It's been an amazing transformation. Republicans who were once the champions of "law & order" are now in direct revolt against the those forces they had once been known to hold up to near perfection. Sure they railed against "Fast & Furious" but that was because Obama was in the White House. Now they have abandoned the notion of "law and order" in favor of becoming the ISIS of Christianity. Sit down with a follower of "45" and it's not long into the conversation that they start preaching about love and forgiveness, all of which was absent during the eight years of President Obama. It really is astounding.

Safe to say that when Jesus is brought into the conversation just sit back and listen because Jesus would not recognize a single thing this crowd is up to. Not...one. But it makes for good conversation and an on point cartoon from our contributor Tim Lloyd.  Thanks Tim and you can click on the image to enlarge.

When times are tough with our friends in the GOP, you know...like when they can't find a way to govern and make sense at the same time...they turn to that tried and true, number one play in their playbook: Fear. Think about it, any time a Republican talks there is some deep darkness that surrounds the sound. From the disgraced Sen. Joe McCarthy (R-WI) in the 1950's to the bellowing of "45" there is always the "fear factor". The latest? "Russia has created the ultimate nuclear bomb capable of taking out vast areas of the east or west coast and we'll never see it coming because it is a giant torpedo that travels along the ocean floor." So much for "duck and cover". How is that connected to "45"? Thank you for asking because while you were sleeping "45" has decided that it is time to put an end to our nuclear bomb diet and go all in on creating more weapons of mass destruction.

The national media is going nuts with the report that American's are going to buck the Democrats and continue the GOP strangle hold in the House and Senate in 2016 elections. Over the weekend we've seen several "reports" that the Democrats are scared they are taking too much for granted and that voters are starting to slide back to supporting the GOP. Hogwash. However we've got to stay on our game...every day.

I live in Polk County, Iowa. It is the epicenter of EVERYTHING...just ask us. Over the past several weeks Polk County Democrats have trained 240 individuals for the 2018 Iowa Caucus Event on Monday. Polk County has 177 precincts. If you do the math you'll see we have a pretty good number of folks dedicated to pushing our cause forward. You should also know that many of the people trained are first time caucus goers. I've had the opportunity to meet several dozen and they all say their are motivated to work and win this fall.

Even better news? I'm hearing much the same from friends across Iowa from Cerro Gordo County to Pottawatomie County to Webster County to Boone County to Dubuque County to Lee County. People are fired up and ready to get this ship moving toward November.

If you don't know your voting precinct here is a link for you to put in your address and find out where you vote. Then link up with your local Democratic Party and let's get our caucus on!

In a stunning reversal the Iowa House "Let's Just Kill Them Bill" won't make it out of committee. It's not because Public Safety Committee Chair Rep. Clel Baudler (R-Greenfield) does't want it...he sort of salivates on ending the 50 year old ban against capital punishment in Iowa...it's that he didn't have the votes to bring the bill out of committee. And, in a stunning reversal, Rep. Steven Holt (R-Denison), who had been in favor of the bill said last week he could not support it. Why? Because he said that after studying the reality of the death penalty he came to the understanding that it is not equitable. He went on to explain that if you have the means you can escape the sentence but if you are poor it is more likely that you will be convicted. Well...DUH! However Steve did reserve an interesting footnote saying, "I support the death penalty in theory and believe it is absolutely morally OK based upon my faith." See...once again Jesus enters the room.  Weary...so very weary. But...the Senate Bill is STILL alive. Just so you know... 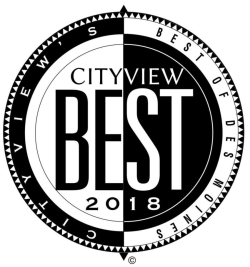 Some of you know that I created, and host, the only Monday - Friday hour-long radio broadcast in the Midwest that focuses on business. That's right BUSINESS and very little politics. Insight on Business the News Hour is now in it's fifth year and as of Friday we posted our 2,000th broadcast interview. It's important piece dealing with caregivers in Iowa and something that AARP-Iowa is pushing in the legislature. The bill is called the Iowa CARE Act. If you want to check it out here is our Radio Blog and here is Podbean where you can subscribe to the interview portions of the broadcast. You can also find us on iTunes, Stitcher and TuneIn Radio for the podcast.

In a related story I want to thank those of you who voted in the recent Cityview Magazine Best of Des Moines reader poll. In it I was chosen as the "Best Radio Voice that Turns You On" here in the Metro. Now if only more folks would turn on the Business News Hour as they drive home...that would be SUPER cool. You can find us M-F starting at 5PM on AM-940.

OK...that's it. Have a SUPER Sunday and thanks for reading. See you on Caucus Night!