Don't you just LOVE this time of year? The pristine snow, the retail outlets festooned with red hearts and offers and owners eager to

separate you from your money all in the spirit of...love. It's the Valentine's Week Edition of Sunday Morning Coffee often serious sometimes snarky...but, what the heck, it's the world we live in. Take a moment to grab some coffee as we share the love of politics.

I Love a Parade!

Where do ya start with this? We all know that "45" is enamored with folks like Stalin, Hitler, Mussolini, Putin 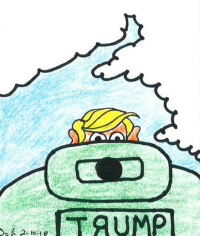 and "Little Rocket Man". He LOVES the strength and the show of strength. Something that he will never understand and reason 100 as to why he is so dangerous for our nation. "45" was in France and saw the Bastille Day Parade so he's thinking, "Why not spend some of that extra money we've got laying around in the treasury and throw a big military parade?" Just think. He could be sitting in a viewing area as jackbooted Immigration and Customs Enforcement (ICE) agents march by saluting the "Bone Spur in Chief". It would be simply...lovely. Or perhaps he could take a page out of the famed Michael Dukakis campaign and roar around in a tank. Now that would be...lovely. (Cartoon - Tim Lloyd)

And for your viewing pleasure how about a little Joey Heatherton....

I always sorta thought she was....LOVELY.

In case you missed it last week the United States deported a guy who has lived in this country for 39 years. He built three businesses employs dozens, has a wife and four daughters who all live in Youngstown, Ohio. Amer Adi is one of the casualties of the increase in deportation arrests in America since "45" took office. Remember when the weasel said that only "bad hombres" would be arrested and deported? He lied...or course. In this case, and no doubt hundreds of others, we are making a mockery of our status in the world. Even a United States Congressman, Tim Ryan (D-OH) couldn't help but at least he tried...many times. If you have not read or heard of this story please check this out from CNN. It is heart-wrenching.

In the weeks leading up to the release of "The Memo" by the lap dog Rep. Devin Nunes (R-CA) folks like Hannity and Limbaugh and Fox News were whipping their faithful into a frothing frenzy. "It was going to be the 'get out of jail card' for the president!" Then, with the release came the resounding...thud. That's it? Now comes the Democratic Memo which the ranking member of the committee Rep. Adam Schiff (D-CA) says is factual. But, the White House said it can't be released and that it is "political". In a tweet Schiff responded to "45" by saying, "Mr. President, what you call 'political' are actually called facts, and your concern for sources and methods would be more convincing if you hadn’t decided to release the GOP memo ('100%') before reading it and over the objections of the FBI".

Bottom line...the ten page piece from the Democrats will never see the light of day...besides it's way too long for "45" to actually read it. 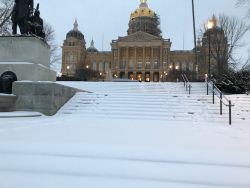 Here in Iowa we love snow so much that cleaning it off the steps that lead to the capital building is forbidden. Visitors get to walk past the stately building and gaze at the pristine white snow which frames the golden dome. Either that or the reality is that we just don't have the money to clean up the place up. But, I have a suggestion! Let's simply have our legislators and elected officials who love to opine, mostly about nonsense, buy some shovels and get to work. Bet we could clear off the steps by...say...April.

Never let it be said that Iowa is better than the Jim Crow South as we are on our way to becoming the Alabama of George Wallace. A bill, fostered by Sen. Amy Sinclair (R-Allerton) would do so very much to make sure well to do folks in cities like Des Moines, Waterloo, Sioux City and Davenport could jet away from their lousy city schools and enroll out in the suburbs where the snow is so much...whiter. Now, to be sure Sen. Amy is calling this 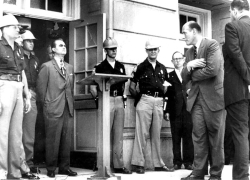 "school choice" however it's a tool that will do away with income guidelines on school enrollment which was put in place for the specific purpose of not segregating our public schools. To be sure folks in Allerton don't have this problem but, clearly the good senator thinks our cities do. Here is how you avoid the problem. If you live in the city and you are so offended by the public school there...move. Or save your money and enroll your kid into the local private religious school. There are, from what I understand, Islamic Madrasas, in many of our cities.

Side note...who is against such a bill and who might be for it?  The Des Moines Register reports that,  "So far, 30 lobbyists, including educational and faith groups, have registered their opposition. The only one registered in favor is Americans For Prosperity, the Koch brothers' main political advocacy group". That should tell you something.

On the same note our good friends in the Iowa Republican Party, who control both the Iowa House, Iowa Senate and the Governorship, 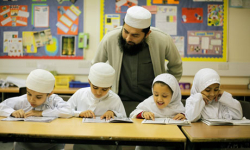 think that it is unfair for the good folks of Iowa to have to spend extra money to send their kids to private religious schools and not be able to take advantage of the state helping pay for the privilege. So, why not give those parents vouchers...you know...money from your taxes so that Mary can attend the local Catholic school, Brad can go to the local Christian Bible School, Amir can go to the local Islamic Madrasa or that David can attend the Jewish Torah Academy?  Whoa now...hold on. Did he say....Islam and Jewish?  Wait...no, no. We didn't actually mean THAT!

Bottom line here is that, once again, if you really want to send your kids to a private, religious (or non-religious) school please do so but do not...do not...expect me to foot the bill. Yeah...and there is that Islamic and Jewish thingy too. But, maybe we can carve them out? It would be the decent thing to do.

I was under the Golden Dome for three hours last week. Got up close and personal with several legislators, the governor the "acting" lieutenant governor and...some real people. People like Mark McCulloch who is the Iowa Emergency Medical Services Association president. Did you know that your local emergency medical services staff, usually assigned to your local fire department is...unfunded? I didn't. The state doesn't see EMS as a necessary part of public safety. Astounding when you consider that the vast majority of 911 calls are for medical emergencies. As it stands, or so I am told, EMS is currently an "add on" to communities and counties who are already cashed strapped. Let that one sink in for a bit. 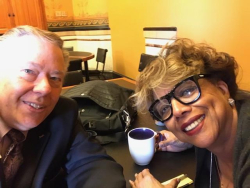 Last week I got to spend some quality time with Rep. Helen Miller (D-Fort Dodge) and talk a bit about economic development there and her retirement from the Iowa House. Helen said she is not "done with helping" but pretty much done with the long commutes from Fort Dodge to Des Moines. "It's getting harder and I've got lots of things I'd really like to do..." Helen has been a champion for people in Webster County no matter their political affiliation. "Long ago I decided to become part of the Agriculture Committee here at the House. Agriculture is such a vital part of our area that not being there just didn't make sense." Her work there served as a buffer to the many farm organizations that tend to push policies of the right. So much so that they didn't come out and work against her. Smart...very. The person running for this house seat is Dr. Megan Srinvas who grew up in Fort Dodge, went to school and made the decision to go back to serve her community as a physician. Make it happen Webster County!

Last night I got a call from Mason City telling me that a long-time member of the Adas Israel, the synagogue there, had died. Sylvia Kropman, 95, who had resided in a long-term health care facility there for the past five years was delightful. She had been born and raised in St. Louis and moved to Iowa with her husband Leonard, who passed away several years ago. While in Mason City Sylvia and Leonard operated a tiny local grocery store and raised three children, Sharon, Elliott and David who still live in the home that is next to the old store. She was involved in SCORE (Service Corps of Retired Executives) and I remember, long ago, attending a conference there where she spoke. I've been going to Mason City to provide religious services for 30 years and Sylvia had become, not only a congregant but also a close friend. Funeral services are pending at Fullerton Funeral Home. May Shifrah bat Chaim rest in peace and my her memory be a blessing to all she touched.

Thanks for reading and have a wonderful Sunday and week...

" the ten page piece from the Democrats will never see the light of day...besides it's way too long for "45" to actually read it."

DTs lips wear out after page one. His comprehension ends after the first paragraph.