Welcome to Sunday Morning Coffee where it's OK to talk about the two things Mom said never to discuss; Politics & Religion. Here are some news stories you've seen, some you may have missed, but all laced with my commentary. Why? Because it's what I do...on Sunday Morning. And, yes, you can click on the images to enlarge. Grab a cup and let's go!

You knew it was coming. The moment the news flashed across the wires we braced ourselves for the words we knew would be uttered from political leaders across the country. The empty assault rifle magazines still littered the floor of Marjory Stoneman Douglas High School when the "thoughts and prayers" mantra 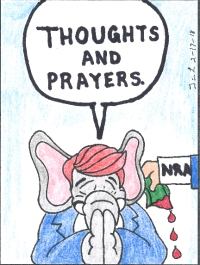 echoed across America. The same words we heard when 59 people were killed in Las Vegas. After shots rang out at the Texas First Baptist Church killing 26. When young people were murdered at the Orlando night club killing 49 people. The endless and empty "thoughts and prayers" refrain that out of touch politicians offer to a public crying for leadership and action in the hope it will offer them cover for their inability to govern and do what other nations have done to help keep us safe. Keep us safe in our houses of worship, our schools and at venues.

"Thoughts and Prayers" perhaps means these castrated politicians hope our thoughts will move on and pray we won't call them out for their inaction. I don't know what they mean because they are just empty words. (Cartoon - Tim Lloyd)

I've taught religion and conducted religious study groups for nearly forty years. Living in Iowa, as a practicing Jew, is a bit of a novelty and I'm often asked to teach or speak about my faith among individuals who are not Jewish. And, for nearly a decade I worked in leadership at one of the largest missions of the United Methodist Church. (How is that for crossing a line?) I know a bit about religion, faith and prayer from my tradition and the tradition of others. That's why the phrase "Faith without works..." comes to mind each time I hear "thoughts and prayers". If you read from the Christian Bible (James 2: 14-24) the issue is clear. You can have all the faith in the world but if you fail to act that faith is as dead as the 17 people in Florida. Spare me your "thoughts and prayers" until I see a bit more action. Deal?

Maybe, just maybe the students who are organizing in Florida might move the needle. Since the Douglas school murders the kids there have begun to organize and speak out.   (Photo - Getty Images)

"The people in the government who are voted into power are lying to us. And us kids seem to be the only ones who notice and our parents to call 'B.S.,' " Emma Gonzalez, a student at the school, said. "We are prepared to call 'B.S.' "

Gonzalez delivered an emotional plea for new gun restrictions in a speech on Saturday, blasting President Trump, the National Rifle Association (NRA) and lawmakers for what she called their self-serving and ultimately hollow responses to the shooting. 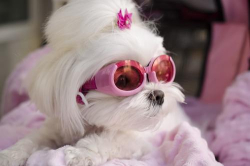 The Biggest Lap Dogs of the NRA

Money talks and it is money that gets action...or in this case no action. The National Rifle Association has spent millions to control their puppets in Congress and make sure nothing is done when it comes to even little changes like "gun-stocks". Who got what? Here is a list of the top lawmakers on the take from the NRA as calculated by the Center for Responsive Politics at the New York Times:

Top Senators and their NRA Contributions

Top Members of the U.S. House and their haul from the NRA:

What Do We Do?

This isn't hard and if we look at what other nations have done the effort will result in an end to these mass murders. Here is a starting list:

How? Let's say we direct the $21.6 billion, which is what the Department of Homeland Security says the "big, beautiful wall" is going to cost into a "buy-back" program which would confiscate these mass murder weapons for cash. Or...hell...let's just swap a muzzle loader for an AR-15. Seems fair.

Back to "45" and Twitter. This morning he tweeted that, "I never said Russia did not meddle in the election, I said 'it may be Russia, or China or another country or group, or it may be a 400 pound genius sitting in bed and playing with his computer,' " Meanwhile, of course, the intelligence is that Russia did impact the 2016 election and they are gearing up for 2018. A fact check regarding Russia and "45" will show there have been many times the president has said he "believes Putin" when the Russian president said "Nyet, we did not do...." Weary.

But, I did see this nifty piece on Twitter the other day.

Hey, I'm sorry I was so fixated on weapons today. It's been on my mind all week. On Friday I officiated at a funeral in Mason City for Sylvia Kropman the matriarch of the synagogue there. She was a fireball committed to working in and for Adas Israel (synagogue there), the SCORE, in the family grocery store and in the Cerro Gordo Democratic Party. The stunning difference between doing a funeral for a 95 year-old woman as parents were burying their 14 year-old kids was not lost on the event. Speaking of Mason City...DO NOT allow the GOP to turn out Sen. Amanda Regan (D-Mason City)! While I was there this weekend I visited with several very worried Democrats. We can not allow this to happen. The Republicans have money and a name...but we've got an effective legislator who honestly cares about you and your family. You can do it...and there is help from across the state.

Because I spent the weekend in Mason City I was unable to go to the Black & Gold Ball here in Des Moines. Thank you for making a place for me Sam Reed and friends. However I couldn't make it all work.  Next year!

Should I be fortunate enough to be elected to the Iowa State Senate in 2020 you can bet that first on my list will be finding a way to control these weapons of mass murder here in Iowa. There is so much that needs to be done to reverse so many of the failures of the GOP stranglehold on our state...water quality, a budget mess, voting and voter suppression, health care, corporate welfare, workers, families and...guns. This crowd has been bad for you and your family. It's time to turn them out.

UPDATE:  I had finished writing this and started posting across several "friendly sites" and learned that my friend Jonathan Narcisse died this weekend. I understand it was a heart attack. Jonathan has been ill for some time but he was working on getting better. We had just visited about doing some work together. We are all diminished this morning.

Thanks for reading and have a peaceful Sunday.