This is feeling more like the Brunch Edition! Welcome to Sunday Morning Coffee, glad you came by. This is my, now in it's 10th (or

maybe 11th) year, regular look at political stories you may have seen or some you missed all laced with my, often, sarcastic commentary. For those of you who don't like politics or religion (yeah, I often rail against that as well) this may make you feel uncomfortable. But, then again, try being a liberal. OK, enough with the introduction...let's go!

It's been a long time since I've taken the time to watch "45" give a campaign speech. Last night I decided to see what the 2020 race would center on as "45" addressed a loving mass of his followers in
Pennsylvania. Let me offer up, for those of you who missed it, the major points of his speech:

You are welcome...and now aren't you glad you didn't spend all that time and that I sacrificed for you? (Photo Credit - USA Today)

But, It's All Bullshit 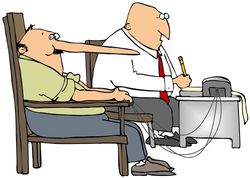 But, you already know it. And as the "no-information voters" behind "45" shrieked and nodded their heads in agreement with every point he made he was...lying. The reality: 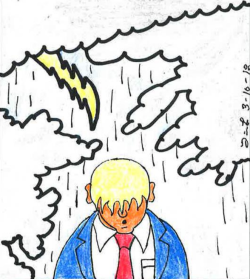 A Storm Is Brewing...

For those of you in the know Stormy Daniels is coming back to Iowa. My friend Patrick Palmer, who has an interesting hobby of attending various porn star trade shows...and yes, I've seen the photos...reports that "45"'s former lover will be preforming at Big Earl's Gold Mine later this spring. It seems she had written off Iowa because she was "stiffed" (I know...right?) some money from a strip club operator in the Quad Cities and swore she would never again perform in the Hawkeye State. No, really, Patrick has the "inside" story on all of this. See what I did there? However, she has relented and will be here just months ahead of the 2018 elections. There is, as of yet, no confirmation that she will be invited to Terrace Hill for tea with Gov. Kim Reynolds (R-IA). We'll "stay on top" of Stormy, but may need a manual from 1600 Pennsylvania Avenue, as the date get closer. (Cartoon - Tim Lloyd)

Which Brings Me To...

Our governor got to cozy up to Vice President Mike Pence last week. Pence was in Council Bluffs touting the tax cuts and crowing about how much they have helped "regular Iowans". He did not mention how much they have helped the not so much "regular Iowans" who rake in the big bucks. Gov. Kim Reynolds was there saying that Mr. Pence is "...the best Vice President our nation has ever had". I'm not making that up. While it was nice that birds of a feather could flock together in Iowa it just goes to show you, once again, how completely out of touch this woman is with the people here. You all can make nice about her all you want...but she is not what this state needs...ever. Behind that "aw shucks" image is a cold, cold member of the GOP. Never forget it and she, too, will lie like hell. 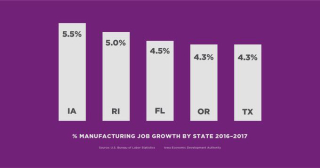 group in the state has been lining up for years clamoring to lower corporate taxes in Iowa. They say, loudly and in their talking points, that Iowa must lower its corporate tax rate of 9.99 percent so that the state can be "more competitive" in attracting business and industry and jobs. Oh my! This too is...bullshit. That fact is even more pronounced when the state is lauded as "The Best State in the Nation" or when graphs like this emerge shouting "we're the best in manufacturing"...from the very people who are saying we are on the road to ruin if we fail to cut taxes. (Yep, you can click on the image to enlarge) 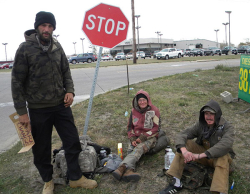 Why would Iowa want to become Kansas and decimate our infrastructure, our education, our quality of life our ability to live in, often, safe communities? Why might Sen. Charles Schneider (R-Clive) and his pal Rep. Chris Hagenow (R-Windsor Heights) and Gov. Kim Reynolds and the Iowa GOP and the GDMP and ABI all be lining up and telling this false story? Because they simply do not give a damn about the people living on the margins. "Go someplace else. We don't want you poor folks in our state!" They all hate government unless government is working for them. "Starve the beast (government) and you starve the people and get rid of the trash." That can be the only reason because not one corporation in Iowa pays that tax rate and if they do they are fools. Oh...and want a peek at what happened to the great tax experiment in Kansas? Here you go...  They are all lying to you and if you swallow it...we're all in trouble. Especially the 14.4% of Iowans who fall below the poverty line. (Photo Credit - NorthIowa Today)

The Local Option Sales & Service Tax (LOSST) lost last week and in the most unlikely places. West Des Moines voters said "yes" to the one penny sales tax increase so too did Windsor Heights and Des Moines. Voters there were all willing to pony up, like they did in Dallas County and Waukee, to increase the sales and service tax by 1% to pay for much needed infrastructure, property tax reduction and other quality of life programs. I broke with many of my friends in the Democratic Party who said, correctly, that a sales tax is a "regressive tax" that can hurt lower income individuals. Key word is..."can". My view was the "long game" where creation of infrastructure, a lowering of property taxes and building enjoyable communities was a shared responsibility of the many. Those efforts, I believe, would lift people rather than put pressure on them. Now we are looking at higher property taxes, cutting police and fire, slashing community events...it's going to get ugly. The interesting thing about the vote last week was that voters in high-wealth communities like Johnston, Urbandale and Clive voted 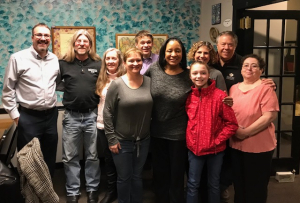 the measure down. I know I took a personal interest in the effort by giving three public seminars on the topic. My question is...what did
leaders in Urbandale, Clive and Johnston do?  Answers???

Last week the members of this committee met at Chucks Restaurant (if you have not been you MUST GO!) for some pizza, onion rings and conversation. The committee is headed by June Owens whom I have come to know and respect if not only her work pushing for inclusion but also her business sense. She also is involved in marketing and public relations and helping businesses cross over into minority markets. Good stuff.

On hand in this photo, among others is Polk County Auditor Jamie Fitzgerald whom I've known for as long as he has been alive, Mark Cooper the president of the South-Central Iowa Federation of Labor AFL/CIO, his bride Patty, (Ack...now I'm in trouble...because I failed to write down all the names!) standing just to the left of my grand-daughter Jovie (this is how you raise progressive leaders) is June, just behind June is my friend Claire Celsi who is running in Iowa Senate District 21. And, yes...I am supporting her. It was a great evening and thank you so much June for pulling this together. Those of you who missed it...missed it! 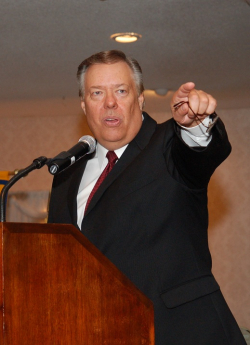 Also last week I sat down with community activist Al Womble from West Des Moines and we had a great discussion about workers, worker safety, taxes, leadership, the Iowa Legislature and so much more. Al, in case you don't know, dedicates hours of his time to recording photographic history of events for the Polk County Democrats.  He's a "keeper" thanks so much for the visit!

Tomorrow I'm taking "The Show On the Road" and headed to Jefferson to speak to the Rotary Club there. My friend John Brunow from All Ability Cycles made the invitation and I'm looking forward to the conversation. While it will center mostly on business and my topic, "You Don't Know What You Don't Know" I may sprinkle some politics into the address. Just to keep things interesting. Like your Mother told you, "Never talk politics and religion..." What the heck...should be fun and I promise to be nice.

Gotta go...headed to a client meeting this afternoon and I am so sorry this is late!  Dang time change...right?

Have a great Sunday and thank you for reading!