Reckless...know what it means? It's a word people throw around but have you looked at the meaning? "Reckless (of a person or their

actions) without thinking or caring about the consequences of an action." Welcome to Sunday Morning Coffee the Reckless Edition. Some of the stories you may have seen others, perhaps not. All are laced with my commentary. My name is Michael Libbie and thank you for reading. I'm sure something here will spur you on to thought or action without being...reckless.

I'm not sure what the hell is going on in the mind of "45"..if anything. Also, I'm not sure why he hates Canada so much. (Maybe because life there is a lot more stable than here?) Twice in the past six months "45" has enacted or said he would enact trade sanctions against Canada. Yeah, THAT Canada. The first was a import duty on Canadian

lumber. That, according the the National Home Builders Association, has resulted in an average cost increase for a new home by $8,200. Now it's steel. To hear "45" talk, and he does a bunch of that, he is out to "punish poor trading partners and increase U.S. jobs". So, you might think he's talking about China. However China ranks 10th among the steel importing countries. Well below Canada, Brazil, South Korea and Mexico. But, don't take my word for it here is a link to Reuters and their "Factbox" study.

Impact of this idiotic and reckless move? More cost to U.S. Consumers that would be YOU. And, jobs? "45" lives in a fantasy world that has him thinking we are loaded with steel mills that employ millions of workers. Fact check: Those industry jobs have been shrinking for decades and today employ fewer than 200,000 people. Meanwhile the companies that buy steel and aluminum to make stuff employ more than 6.5 million workers. That from a Heritage Foundation analysis of Commerce Department data.

I could go on and on...meanwhile this reckless act has car makers in Europe saying they will retaliate. Better buy your BMW before the sanctions kick in. Weary...

Last week, on the heels of China altering their constitution allowing President Xi Jinping to essentially be "President for Life", our president said he thinks that's a great idea and added, "Maybe we'll try something like that here." Every time this clown opens his mouth it is a total embarrassment to our nation. 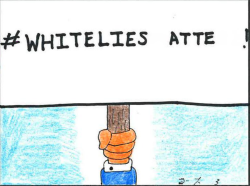 Last week we learned the punishment for telling the truth is losing your job. Hope Hicks, the longest serving official serving "45" quit mostly because she admitted to "telling white lies" about the administration. Hope Hicks, who by the way, has zero experience in government, zero experience in public relations, zero experience in communications and yet she was the Director of Communications for the White House. Well, she was a model...  Now the question is, Did Hicks tell "white lies" to the FBI in their investigation? Last time I checked that is a strict no-no. But, then again Hicks is a pretty...model. And, the government likes models just ask them about Melania who acquired an "Einstein Visa" in 2001. It's called that because it is reserved for "people with extraordinary ability" and, as everybody knows, it takes great ability to walk the cat walk.  (Cartoon: Tim Lloyd) 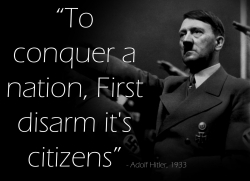 I have some friends who are nuts about their guns and the idea that any attempt to deny them the opportunity to worship at the alter of these weapons of war send them into a frenzy...and tell baseless lies. Over the course of several days a couple of these folks posted to my Facebook Page images like the one here. Anytime you want to scare the hell out of a Jew post a photo of Hitler...right? Anyway it's not true. Did Hitler disarm people? Yes political enemies and Jews were not allowed guns. But, following WWI guns in Germany were severely restricted. When Hitler came to power his government actually loosened gun laws. That's right in 1938 Hitler, through the German Weapons Act, made it easier and lawful for Germans, other than Jews, to acquire rifles and all the ammunition they wanted. It also lowered the legal age to buy a gun from 20 to 18 and extended the permit of ownership from one year to three. So stop...stop being an idiot. It's simply...reckless.

Let us now move on to stuff in Iowa. Last week the Iowa Senate passed one (if only it were just one) of the most reckless pieces of legislation in a week. The Iowa Tax Cut bill lowers taxes, immediately, by nearly $1 billion. Charles Schneider (R-Clive) is one of the 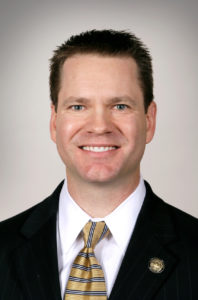 most reckless individuals in the Iowa Legislature. Why? Charles is the chair of the Appropriations Committee and a lackey of the American Legislative Exchange Council (ALEC) those two groups are eager to do what? No, not make your life easier but to make it more difficult. What is the easiest way to reduce school funding, teacher pay, health care, mental health care, workers rights and any number of programs to ensure a higher quality of life? Starve them. That is the end game for Chuck and the minions in the GOP. I told him, to his face, that I would fight him on his Voter Suppression Bill that made it harder for folks to vote. He and his crowd used fear to get some to think our elections were being stolen by faceless and nameless people stuffing the ballot box. False and he knows it. Meanwhile he dishonors 80,000 Iowans who fought and died in the Civil War in their effort to protect and defend the Union against states rights as he lifts up the goofy idea of a Congress of the States. At least now "reckless" has a face.

I'm breaking with many of my friends in the Democratic Party and voting for the Local Option Sales & Service Tax on 6 March. (Remember to take your ID so you can show your "papers" to the officials waiting in jack-boots at your polling place.) Polk County is one of only two counties in Iowa that does not have this tax. Is it regressive? Yes. Is it necessary? Yes. Here is my rational, and you are invited to poke holes in it if you want. Our cities in the Des Moines Metro are being starved. In 2012 people in my party sided with the GOP in that massive tax shift which lowered commercial property taxes. They believed those reckless legislators that a reduction in commercial property taxes would reduce low income rents. Didn't happen. What did happen is less money flowed to our cities. That meant that cities had to increase property taxes on homeowners. This vote seeks, in many parts of the Des Moines Metro, to relieve property taxes and put more money to work on much needed infrastructure programs and quality of life programs that enhance living and working here. In addition, according to research, roughly a third of the taxes raised in Polk County will come from visitors to our area.

I would much rather see a more measured approach in our giving massive tax breaks and incentives to already successful companies who, often, fail to create large numbers of well paying jobs. The job count vs. the huge tax breaks don't add up. And the current system is not sustainable. Once we take back the Senate, House and Terrace Hill we can roll back those disasters. But, in the meantime...

Leaving For An Easier Life - Not Reckless

It is welcome news. Rep. Chris Hagenow (R-Windsor Heights) has announced, as many of us suspected, that he is moving to pastures that are far more red. That means he'll not have to face Jennifer Konfrst in November...and get beat. While this is great news and I would suspect cements a win and a pick up for Democrats in the House we can not take anything for granted. 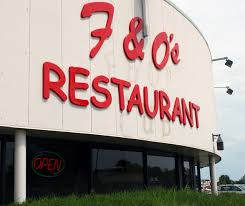 I had lots more to share with you but time is slipping by and the coffee needs to be served. Let me leave you with this story. Yesterday I went to Felix & Oscars for, what I had thought, was a meeting of the Polk County Democratic Leadership. Except is was...cancelled. I didn't get or didn't read the memo. I showed up along with an activist with the Urbandale Democrats, Joan Olson. Felix & Oscars had prepared a huge amount of food...seems they didn't get the memo either. After Joan and I had breakfast at $8 a plate...a bargain by the way...we asked what they were going to do with all the food. "I guess, we'll offer some to the employees and the rest we'll throw away." That didn't sound like a great idea to us and Joan offered to buy all of the food and donate it to a food kitchen. Felix & Oscars came back to our table and said, "The management doesn't think you can afford that cost...so we're giving it to you. No charge." Now you know why we meet there?  Anyway we boxed up the food and I took it to Creative Visions where they make about 200 meals a day for folks in need. Thank you F&O for the donation. We are all better off!