Good morning and welcome to Sunday Morning Coffee - The Fools Edition. Sure I could have called it The Bunny Edition or the Passover

Edition or the Easter Edition...but me thinks "fools" says is best. Here are some stories that you might have seen, or missed, all laced with my commentary.  It's what I do on Sunday Morning...let's go already!

I've come to the conclusion that April Fools Day just isn't as much fun when it is tied to Easter Sunday. The radio disc-jockeys have the day off...so nothing there. There is that church thing that gets in the way of pranks. (Guess you could put real wine in the communion glasses at the Methodist Church...that would cause a riot.) Or during Passover you could leave out a bread wrapper and freak us out.  But...the fun is dissipated just a bit.  Next year...right?

There is a passage in the Passover Haggadah (book we read during the Seder) that quotes Pharaoh as saying of the Jews, "Behold, the people, the Children of Israel, are more numerous and stronger than we. Come, let us outsmart it lest it become numerous and it may be that if a war will occur, it too may join our enemies and wage war against us..." I thought about this on Friday evening and again last night 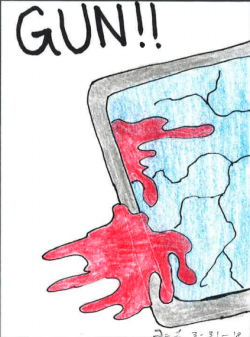 during the Seder and reflected on the fear so many white people have when it comes to people of color especially those of African decent. Our nation has a sickness that can be traced back to the "Original Sin of America". The sin that said it's OK to trade in human life and enslave people to do the bidding of the majority race. And, ironically, they pointed to the Bible for support of the practice. Today, just like Pharaoh many fear.

I was not in Sacramento. I was not in the back yard of Stephon Clark's grandmothers home where officers shot and killed a man holding a cell phone. However when we fear we kill. It happened in Ferguson, in Atlanta, in New York, in Detroit, in Chicago...

America is coming face to face with the reality that soon, very soon, the white people in this nation will become a minority. That scares the shit out of many. So America "doubles down" on "dealing harshly" with those people. Deport them, marginalize them, refuse entry into the country and...kill them.

What is it that causes the vast majority of mass killings in this nation to be committed by white men? It's a serious question. Perhaps a glimpse of the rational comes from a Facebook post that I read the other day...from a white man. It said, in part, "I am a white man and I am being marginalized and kicked to the side of the curb. My culture and my heritage are constantly under attack. Is it any wonder why we retaliate?" Let that sink in for a bit.

Meanwhile last night in Sacramento a sheriffs car sped up and hit a protester. The cruiser not stop after the 61 year old woman was hit. The "official report" says the police vehicles were being kicked at "leaving dents and possible broken glass" and so...in fear a woman was hit. The video that has been posted shows none of the kicking or destruction of the police vehicles at the scene. Here is the video from the Washington Post.

We Are All Fools 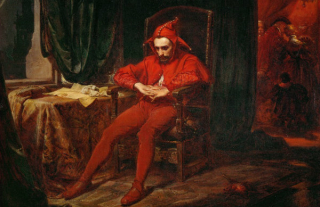 I am starting to wonder when America is going to get it that we are all being played for suckers. We are being played by Democrats as well as Republicans. You see...it is no longer a political party line it is the powerful vs. the powerless. And both parties seem to be hoping they can dupe you into remaining a fool. The Republicans just don't give a damn. Here is Iowa the GOP House and Senate and the Governor pass and sign into laws that have the express purpose of keeping the people under foot. They deny better pay and roll back hourly rates to the slave wage of $7.25 and hour. They suppress the vote by fostering the myth that voter fraud is real. They take away the workers rights to do collective bargaining for livable wages and working conditions.  And, the Democrats are spineless in their opposition. Sure, they will tell you that because of the makeup of the Iowa Legislature they are unable to move their agenda. So they talk and they raise money and they tell us, "We must take back the legislature and the governors office and then everything will be fine." Rubbish.

You want to really make a difference? Strike. Be done with this. The teachers union may be the place to start. We whine about poor pay, lousing working conditions, disparate treatment of students...and do nothing. What would happen if the ISEA had guts and said, "We're done playing nice we're walking out." I mentioned that to Tammy Wawro several months ago and she said, "We can't do that it is against the law..." Precisely. Let me suggest to you there are not enough jail cells in Iowa to hold the strikers. If West "By God" Virginia...a DEEP RED state can go on strike. If Oklahoma teachers can strike, in another deep red state, what the hell is the matter with Iowa?  This movement is spreading to Kentucky, Arizona and Wisconsin.

And, we don't stop with teachers. Maybe a general strike is the answer to the horror if inaction by the major political parties... April Fools any one?

We are going to lose the Third Congressional District and Rep. David Young (R-IA) will be re-elected to another two years. Write that down someplace. Unless...unless we stop playing "the game" and offer up bold progressive answers to voters. I'm not talking about the namby pamby policies of the past but some real progressive responses by the candidates left in contention. Here is what I want: I want you to stir the passions of those who are being hurt by this congress. Stop playing nice and go after David Young with a full throat response to the policies that are rejecting basic human rights and dignity. Demand universal health care for our citizens. Demand a living wage. Demand the end of voter suppression. Demand an end to "business as usual" give us a reason to support you. My candidate is out. Theresa Greenfield, in my mind, had the best chance of beating back the GOP in November but she is out. Now I, and thousands of others, have to make a choice in June. From Adams County to Polk County from Dallas County to Pottawatomie County you better ramp it up kids...we're waiting. 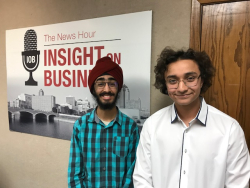 Once upon a time there was a dinner at the White House that celebrated the Iftar. During Ramadan (this year from the evening of May 15 ending on the evening of June 14) followers of Islam fast during the day and then eat at sundown. It is called the Iftar. This goes on for the entire month. President Clinton, in 1996, began holding an Iftar and that was also the policy of President George W. Bush and President Barack Obama. However "45" has decided that holding an Iftar would not set well with his base and abandoned the practice. Fear is a great motivator.  So, leave it up to two Des Moines area high school students to create The American Ifrar Dinner. They launched the idea a week ago and already they have ten universities across the nation who are following their effort. Here in Des Moines the event will take place in the Hall of Laureates at the World Food Prize headquarters. I recently had J.J. Kapur a Sikh and Fez Kafar a Muslim join me in studio for this brief radio interview. (Go ahead, click on the link to hear the conversation). The short of it is...people from all backgrounds, all faiths coming together for a meal the celebrate and to learn. Yeah...the future is in the hands of the youth and it's looking brighter. 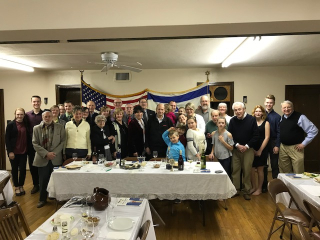 It's April...and it is Passover. Our family celebrated both Shabbat and Passover on Friday night. Our daughter did an amazing job for dinner. Everything was perfect and the company was grand and the table was festive. Passover is my favorite of the Jewish Holidays. It holds the promise of spring and new life.

Saturday night we traveled to Mason City to Adas Israel the little congregation that I've served for thirty years. It is one of only ten still active in Iowa. A couple of dozen Jews and non-Jews joined us for a four hour trip through the Exodus. I got to bed about 2am and that is why Sunday Morning Coffee is late. One of the questions that came up at our home and in Mason City was, "I understand all of the symbols on the Seder Plate but what does the roasted egg mean?" 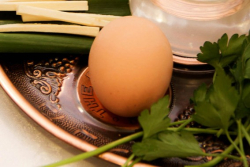 It's a good question. The simple answer is that the beitzah (egg) reminds us of the temple sacrifice but a deeper meaning is about the egg and the Jew. The egg is created in the chicken and is then laid. When tended to correctly and cared for the egg creates a baby chicken that, in time, emerges from the egg and begins its life cycle. The same can be said for the Jew. When we were released from bondage in Egypt we were not yet whole. We had to wait seven complete weeks to come to the foot of Mt.Sinai where we were given the 613 Commandments that gave our faith...life. There you go...

Have a wonderful Easter and Passover and thank you for reading!