Maybe "The Lies Edition" is a little strong. Perhaps it should have been "The Alternative Universe Edition". You see, I just got back

from a 60 hour trip to Washington D.C. and my neck is still sore because of the many times I jerked up from taking notes to see if the speakers nose was growing. Welcome to Sunday Morning Coffee my attempt to add a little snark into our sane world of politics. My name is Michael Libbie and glad you are along for the ride. Let's get going!

If "45" has any more good weeks like this past week he will sail into a second term. He seems to have tamed "Little Rocket Man" and will meet with North Korea early next month. He has brought Canada and Mexico to their economic knees...well...maybe not yet. He has pulled the United States out of the Iran Deal and brought lasting peace to the Middle East...well...not just yet. He has now become an asset rather than a liability for the midterms...we'll wait and see. And, White House Staff have been emboldened by the grave illness of Sen. John McCain (R-AZ). The first and last statements are true. It's been awesome! BTW I did stop into the office of Sen. McCain just to pay respects to a great American. I just had to go and say, "Thank you" to his staff. 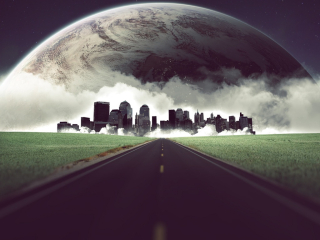 I'm not going to make you wait. Last week I was on a whirlwind 60 hour trip to Washington D. C. and took part in the Greater Des Moines Partnership Annual DMDC learning/lobbying event. It is an opportunity to mix and mingle with 200 thought leaders, business professional and civic minded individuals from Central Iowa. For 39 years it has been one of the most important events which has helped shape our region. I could go on and on about the importance...and will during The Business News Hour tomorrow. Yes, I'll post. However because this is a political blog I'm compelled to share some of the stories I heard come out of the mouths of folks who spoke to us. Let's get started.

At a White House briefing a young "Trumpeter" shared with about 75 of us that, "The president's agenda will move forward with greater speed after we pick up 10 senate seats and build a larger majority in the House."  Oh, it gets better.

At that same briefing (some of my friends did not go and warned me that I would need a shower after treading there) a young man (come to think of it no women were speaking...oh, that's right Hope Hicks left) was talking about how awful the VA hospitals are and, "Just recently, in Wisconsin, the VA hospital there misdiagnosed hundreds of thousands of cases and caused the deaths of many of our brave veterans." Uhm...except that never happened.

Told you this would be fun.

Perhaps the most honest overview of "45" was offered by Sen. Charles Grassley (R-IA) during an early breakfast in the same room where the Watergate Hearings took place. He said, more than once, "Frankly I'm concerned about the brinkmanship with this president and I am hopeful he will not go over the brink." Yeah...us too. 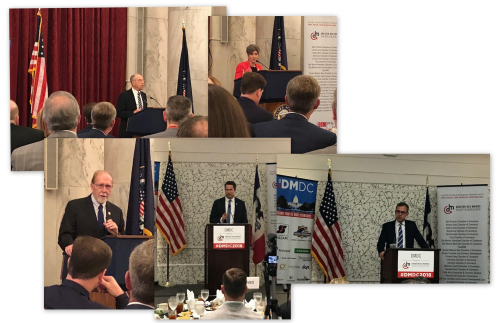 At that same breakfast Sen. Joni Ernst (R-IA) said, "Congress has eliminated a dozen regulations that has saved taxpayers $80 billion dollars!" While that may be true...it is the same line she used last year. You would think she might have come up with a new number?  It's like, "Hey, anybody paying attention to this???" Her thing was all about regulations and tax savings.

I have never met or heard from Congressman Rod Blum (R-IA). He presides over the First Congressional District...think Northeast. But, wow, you folks have something there. Stay with me on this because it's so wacky (and my neck still hurts from jerking up from my notes) that I had to shake my head in wonderment. You can click on the image to enlarge. (Grassley, Ernst, Loebsack, Moulton and Zeleny)

After Congressman Steve King (R-IA) said, "The very best vote I've ever made while in Washington was for the Jobs and Tax Bill in December." And he added, "Businesses are reinvesting in their people and because of this tax cut wages are going way up!" Except they are not. Wages in April were up by 0.1% and year over year are up a little over two percent which is where inflation is at. But, hey...you can say anything in an Alternative Universe.

Meanwhile, back to Rep. Blum who said, "I have two very important priorities that will boost our national and state GDP and if we do these two things we will add more people to the job rolls and fill those jobs all of you are posting." Ready?

Rather than defend his congressional record Congressman David Young (R-IA) gave a history lesson about the room in which we were sitting...it was really quite good. And then launched into an impression of Sen. Grassley talking to "45" that was a riot. Best line was when "45" asked Grassley (in this fake phone call) that resulted in the Mueller investigation, "So Chuck, have you ever had a White Russian?" The crowd loved it...and it really was better than his voting record.

In case you are wondering...yes they did allow Congressman Dave Loebsack (D-IA) an opportunity to speak. He shared his concern about doing away with regulations that protect Americans, granting wavers to refiners to not include ethanol, fear of trade rules that hurt agriculture and the reality that Canada and Mexico are not the same nations they were back in 1993 when negotiating NAFTA and pointed to China that now is a buyer of Canadian soybeans and not U.S. soybeans. But...hey...Dave was being rational. 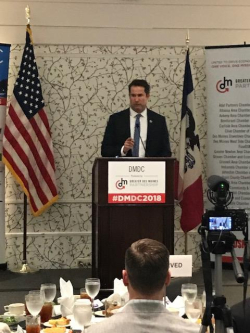 Yes, there were some grand moments of enlightenment. For example at a lunch a member of our delegation asked a question of Congressman Seth Moulton (D-Mass) who was invited to speak. The question, "Congressman, what are you and our elected leaders going to do about a twenty trillion dollar budget deficit that damages the future of our nation?" Without missing a beat Moulton said, "I did not and would not vote for a $21 trillion tax cut. You need to do the math. We can not balance a budget by cutting everything."  It was pretty good.

Unlike the majority of elected officials who spoke to our group Seth Moulton took a whole series of questions and was not shy in responding. It was a good session.

Earlier in the day our group heard, "The media is telling lies about the recent tax cut. It will spur our economy to new heights!" Thank you Congressman Blum. Enter one of the "Liars in Chief" Jeff Zeleny the Chief White House Correspondent for CNN. (I know...right?)  The man from a tiny Nebraska town who has been covering politics for years said one of the most interesting things of the day. It was about the firing of James Comey on May 9, 2017. "I've been asked if there is any correlation between this scandal and Watergate. If Watergate would have happened in this climate I'm not sure it would have been taken as fact. Why? Because today there are so many options to the truth." 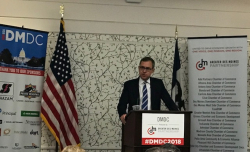 On why "45" and his administration continues to raise doubts about the press: "I believe the president does this so that when the press shares a story that is damaging to the administration it can be discredited particularly among his base."

Finally, to a question about confidence in the media and that media ratings are way down Zeleny had this to say, "In fact, media ratings are up. If it were not for the media doing its job who would have known that Michael Cohen paid off a person to keep her quiet. Who would know that his shell company accepted millions of dollars from foreign and domestic companies seeking access to the president and that those same companies, today, are saying they made a major mistake and lost confidence?"

On the way out I thanked Jeff for being there and answering a question I posed. He looked at my name tag and said, "Windsor Heights? I made a donation there in the form of a speeding ticket." I thanked him...

You really should have been there. 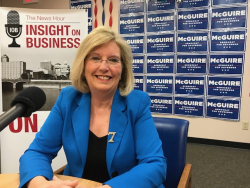 Last week I aired two segments with Dr. Andy McGuire. Today part two will air on News/Talk 1540 KXEL at 2PM. I am hoping to get to all the democratic candidates prior to the June 5th primary. I have offered but, to this point only Dr. McGuire sat down for the extended conversation. If you would like to hear what she had to say click through to Insight on Business the News Hour Blog Post here. If you have a line on the communication directors for others...hook me up. I've tried.

I am so sorry this was so long. But for a political junkie that is also a journalist this was an amazing trip. While I was there to represent my community, and I did, this event is something not to be missed no matter where you are on the political spectrum. One final piece of information: Remember that trillion dollar infrastructure proposal "45" touted during the campaign? Yeah, that one. A senior policy person from Sen. Grassley's office said to the 14 of us in a transportation committee meeting when asked about funding and paying for it, "There is not much of an appetite for raising the federal gas tax and, frankly, the votes are just not there."

Mother's Day - Want to know how to best honor Mom? Get behind paid family leave for mothers...hell fathers too. If you really, really value mom and the kids you'll get that done. It is a shame the United States is the only industrialized nation on the planet that does not deliver on this.

I love it when the story comes together.

Have a wonderful Mother's Day. I know I'm remembering mine.  Thanks for reading!