My name is Michael Libbie and welcome to Sunday Morning Coffee something that I've had the pleasure of writing for well over a decade.

Every Sunday I get to write about the political and religious issues that impact each of us. You may not agree, in fact, I bet you will not. But, if you do then feel free to share. I'm not going to spend much of your time hashing out ALL of the hideous things going on in our nation but I do want to address a couple of specifics. So..grab a cup and let's go! 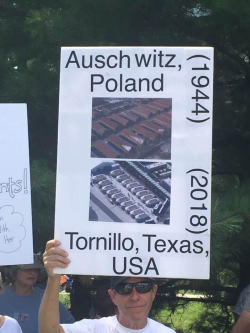 Last week, due to the flooding and subsequent power outages, I was unable to write Sunday Morning Coffee but did post this photo on my personal Facebook Page. The sign came from the Facebook Page of my friend and fellow Jew and progressive, Jodi Sussman Stanfield who attended a rally and protest the day before at the Capital here in Iowa.

The resulting backlash that she experienced was only magnified on my page. The comments and name calling were really out of control. It's often what happens when people are unable to confront the truth. Or their understanding of the truth.

Here I hope to connect the dots between Auschwitz and Tornillo for you because there is an historical link which is being played out right in front of us all. It is called dehumanization. It is this tactic that led millions to be interned and in the end murdered. How could a country as advanced and as Christian as Germany and its partner nations become complicit in this horror? There is a process...and that same process is being played out here in America right now.

Germany didn't just leap into the Holocaust it took years to get there. As you read about these four steps consider the words and actions of the current administration:

The Nazi government, just as our own, fostered prejudice. Prejudice is defined as, "unreasonable feelings, opinions, or attitudes, especially of a hostile nature, regarding an ethnic, racial, social or religious group.” The current occupant of the White House has gone out of his way to foster a hostile attitude toward Latinos. We have heard them called "rapists", "killers", "drug dealers" a "danger to our national security". All of this from the President of the United States.

Similar to today, for many in the United States, the economy in Germany after the Great War sucked. It had to be the fault of somebody. The next step from prejudice is bigotry and blaming. In Germany it was the Jews that were to be blamed in the United States it is the Latino population that is "taking jobs" away from Americans. And, we must "hire Americans and buy American" or so the story goes. If it were not for millions of "illegals" the "forgotten Americans" would prosper.

Once Germany had a target, the Jews, the government there went to work on official acts of discrimination. Calling for the arrest of people who employed Jews, housed Jews or served Jews. Consider what we have done in the United States. Deportations and detentions for even minor infractions. Calls to punish those who hire people without papers.

This is not a new issue. We have seen the persecution of minorities for hundreds of years. Yet, in Germany it was systematic and effective. Bank accounts, homes, synagogues and personal property were confiscated and the Jews were rounded up and housed in ghettos. Walls were built, children were separated from their parents and people were housed in concentration camps...internment camps if you will. Sound familiar?

Those four truths are the link between Auschwitz and Tornillo. It is not he end result of torture, gassing, shooting and burning but the steps in how we get there. To deny these four truths is to deny the Holocaust. I'll leave it there. 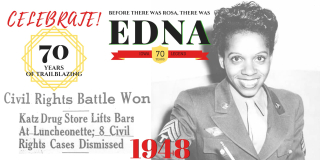 There is a published study that suggests Des Moines, Iowa is an awful place to live and work if you are black. Wages pale (excuse the obvious) when compared to Caucasian, Asian and Latino workers. Unemployment remains in double digits for African-Americans. Housing, food security and access are all, according to the study, substandard.

It must have been much like that in 1948 when Edna Griffin a veteran of WWII made the decision to request service at the segregated lunch counter at the Katz Drugstore. Segregation in 1948 was illegal. The Iowa Supreme Court had said so long, long before yet the business community turned a blind eye to what was happening right in front of them. In the end Edna Griffin won a judgement 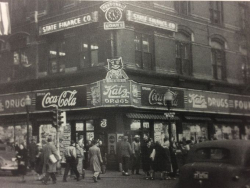 against Katz and the civil rights movement found it's first hero years before Rosa Parks refused to give up her seat on a bus in Montgomery, Alabama.

You would think the 70th Anniversary of such a monumental event would have garnered some press. Yet, it did not. The Des Moines Register in it's Sunday Edition printed not one word of the celebration of civil rights but gave hundreds of words to the fact "Stormy Daniels" was stripping at Big Earls. And, while there might have been some television coverage I saw no cameras or reporters at the event. After all...a bigger story was brewing across town...at Big Earls.

The obvious is right in front of us.

There were hundreds of civic leaders from politics, to business to education at Drake University last night. We were entertained with music, poems and acting. We were on our feet clapping and singing and shouting words of encouragement to keynote speaker Joshua V. Barr the director of the Des Moines Civil and Human Rights Commission who pointed out the fact that "...we have a problem". There were tears and there was laughter and there was a resolve to get up and MOVE as voiced by the Honorable Odell McGhee and the Honorable Romonda Belcher.

"We have a problem."

I spent much of yesterday with my brother. He, like many in Des Moines is currently displaced. His home was ravaged by flood waters last week so he's staying with us until his place is fixed up and habitual. We celebrated Shabbat on Friday night with candles, and wine and food and Torah. On Saturday we were off to a training session with the Polk County Democrats in their new headquarters. Last evening it was off the the Edna Griffin Legacy Awards Dinner. We were up until 2am talking about the day. He said to me, "I have not been this motivated in decades. It was a great day!". And...it was.

Thanks for reading and have a superior Sunday.