When sitting down to write you this morning one word kept coming back to me..."Unfit". It is a word that has been used over and over

about the current president, his cabinet, his advisers and now the, clearly, Republican Hack who wishes to have a lifetime appointment to the Supreme Court. Unfit. Round peg, square hole...unfit. Doubt and lies...unfit. I think you get it. Grab a cup and let's go: 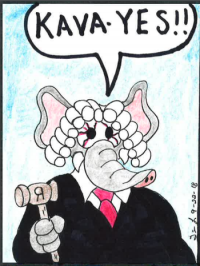 constitutional government was put on display this past Thursday. A senate committee so partisan the members could barely contain their contempt for each other. A woman who came forward and recounted a period in her life that was believable and sincere. A judge so tainted that rather than sit calmly and declare his innocence took the offensive and was angry, belligerent and partisan. A senior senator shouting, pointing and damning. And, finally, the senior senator from Iowa and chair of this spectacle who just two years ago played politics with a Supreme Court nominee continued to deflect and obfuscate the truth. This was America on display and it was not our finest or our best. It was raw politics. Politics at it's very worst. This is the America that has been wrought by the sitting president and whatever happens our history is tainted. We are better than this...or are we? (Cartoon - Tim Lloyd)

Then the dramatic moment, captured on camera, of Sen. Jeff Flake (R-AZ) caught in an elevator with two women demanding that the senator look at them when they recounted their own pain of sexual harassment and begged Flake to consider what his vote of support for Kavanaugh would mean for our nation. Ana Maria Archila, the executive director of the Center for Popular Democracy in New York and Maria Gallagher told their story as Flake, giving the appearance of conflicted guilt, remained trapped in the elevator. 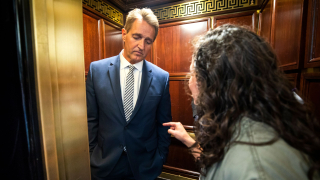 It was stunning and it may have...just may have given America and this senator pause.

“I was sexually assaulted and nobody believed me. I didn’t tell anyone and you’re telling all women that they don’t matter. That they should just stay quiet, because if they tell you what happened to them you’re going to ignore them. That’s what happened to me, and that’s what you’re telling all women in America,” Gallagher said. (Photo - USA Today)

“Look at me when I’m talking to you,” Gallagher continued. “You’re telling me that my assault doesn’t matter and that you’re going to let people who do these things into power … that you’ll let people like that go to the highest court in the land and tell everyone what they can do to their bodies.”

“Thank you, thank you,” Flake responded, as they asked if he believed Kavanaugh was telling the truth.

“Thank you is not an answer. This is about the future of our country, sir,” Archila said.

Speaking truth to power. And it is time. It is time to roll back the unequal standing of women. It is way past time. And, looking at the number of women seeking office this November we may have a good start. 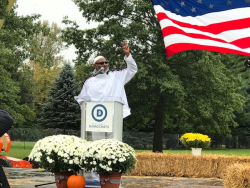 Late yesterday afternoon people standing in the cold rain at Water Works Park in Des Moines received some good advice from Rep. Ako Abdul-Samad (D-Des Moines). It was the close of the Polk County Steak Fry and Abdul-Samad was "the closer". After getting people to come forward and getting them involved with a bit of audience participation he said, "I want to give you some advice. Stop talking about Trump. Stop talking about all the mean and cruel things he says and does. Replace that with work. With knocking doors, with phone calling with getting out the vote. Save your energy and speak about giving voters reasons to vote for Democrats rather than just voting against the president."  He followed up with, "You have the power!"

Good advice which leads to this:

We've Got Work to Do 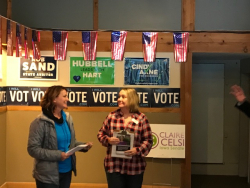 Before several hundred took to the soggy field at Water Works Park for the Polk County Steak Fry there was a gathering in a tiny store-front office in Valley Junction of West Des Moines. There Sen. Jeff Merkley (D-OR), on his fifth trip to Iowa, spoke to a group of about twenty-five people who were getting ready to go out and knock doors on behalf of Democratic House candidates Jennifer Konfrst and Kristin Sunde. I bring that up because rather than go out and hob-knob with friends and party regulars Jennifer and Kristin made the decision to go out and meet with voters. Sure it would have been nice, and safe, to spend the day at a rally but, as Jennifer told me, "We've got work to do".

That's what we're talking about! 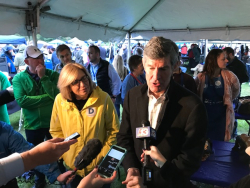 So, let's say you've got the opportunity to ask the candidate for governor of Iowa a question. I was there as reporters gathered under a tent to do just that. The softballs were thrown by the young people who were sent out to do the story.  Fred and running mate Sen. Rita Hart (D-Charles City) talked about how important the election was, how great it was to connect with Iowans, the rain... None of it made it to the evening news. There was one question that got a pointed response. It was about the $127 million budget surplus that was breathlessly released by the governor. The question was, "Mr. Hubbell, what is your response to the report that Iowa suddenly has increased it's surplus by some 90 million dollars?" The answer, "I don't think the people who put together the budget know what they are doing. Iowa continues to send Iowa tax dollars out of state to for-profit managed care companies and at the same time telling Iowans there isn't enough money for education or health care."  Spot on Mr. Hubbell.  Sort of like home. If the bills come in and you don't pay them...you've got more cash in the bank. Smoke and mirrors friends. Kim Reynolds is simply...unfit.

Last week was a "day off" from Sunday Morning Coffee. Thinking back, some twelve years, I'm not sure that has ever happened. But being in Lanesboro, MN without Internet was to blame. But, it really was a good trip and thanks for being patient. 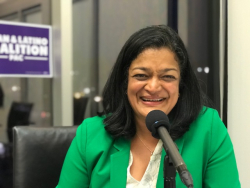 Living in Iowa is like magic when it comes to politics. The access to candidates on the national stage here is without parallel. Yesterday I had the chance to interview Sen. Jeff Merkley (D-OR) and Congresswoman Pramila Jayapal (D-WA) for extended conversations. We'll put those up on the Radio Blog for the Business News Hour later this week. But, that is not just the media it is for everybody. Access to these people who are working on behalf of our national and state direction is pretty simple. Just walk up and ask the question. When explaining that to friends living in other places they are amazed. If you are into politics...living in Iowa is pretty damn cool. 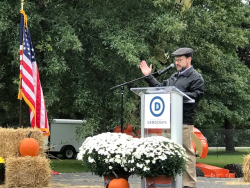 Last year the Polk County Democratic Steak Fry was held on Yom Kippur. I get it. When you have ONE open date you book and, believe me, there was lots and lots of "I am so sorry!" coming from the leadership. This year the event missed the holiest day on the Jewish Calendar and (maybe to make up?) invited a rabbi to give the invocation. Of all the speeches during the day Rabbi David Kaufman, in his opening remarks, focused on people...all people. Folks that are unheard, removed from the debate, forgotten. He spoke of humanity and fairness and openness and love and respect. It was not only an uplifting prayer the message was very, very clear. Represent my friend.

Thanks for reading. Have a great Sunday...we're off to a grand-daughters softball game!   Oh...and tonight is the end of Sukkot and the start of Simchat Torah...just in case you are celebrating!

So what happens when the FBI uncover a preponderance of people saying Kav was a party drunk, and lied about that to the Senate?? Will Grassley still try to give him a pass for lying? I mean, is it different when a Dem lies instead of a Repub?? Or will he say because Kav wasn't arrested, or not convicted, all the rest is just "unproven rumors".

As was fully demonstrated on national TV that Kavanaugh doesn't have the TEMPERMENT to be any kind of judge, especially on the SC.

Socrates once said: "Four things belong to a judge: to hear courteously, to answer wisely, to consider soberly, and to decide impartially."