John Hale - He Can't Be Trusted!

No, it's not really Sunday Morning Coffee on a Monday...but this was too good to pass up! 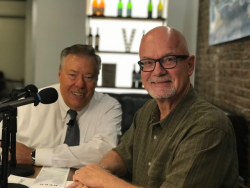 Earlier today my friend John Hale posted up on his Facebook Page what an attack at aimed at him might "say". So, what the heck..I took his words and added some music for this quick "Attack Ad" that clearly has no truth to it what-so-ever.  Go ahead and click and find out why "John Hale can't be trusted...."

“John Hale. Too risky for Iowa.
A federal government bureaucrat. Took taxpayer money to fund his travel expenses.
Accepted money to lobby legislators. Hasn’t released his tax returns.
Took part in a student walk-out.
Crossed a street without looking both ways.
As a city council member, voted for budgets that funded a museum displaying nude art.
Has stayed overnite in a prison.
Has friends that aren’t white or straight.
Once introduced as “A person of interest in an ongoing investigation.”
He’s left-handed.
John Hale. He can’t be trusted.”