If you are reading this in Iowa today (Sunday) isn't it nice that right now, early in the morning the temperature is at its high point of the

day. So, what you need more than anything is a steaming cup of Sunday Morning Coffee! Not to worry I'm here to get you started. Cast off those extra blankets and let's get started!

I wake up every day thinking it will get better. As a white straight male, who, because of those two facts, has lived a life of some privilege, I am coming to grips with what my non-white brothers and sisters deal with every day. "Today is will start to get better..." It's the same silent hope that goes with my brothers and sisters who are LGBTQ. "Today it will be better..." It's the prayer on the lips of the ill and the infirm,

those who look at the sunrise with resolve and hope that the new day will be, somehow, better. But every day since the presidential election of 2016 our hope is dashed when we realize what sits in the White House. It ain't getting any better. It is getting worse...by the minute.

Each week-day I write the business news of the nation, interview interesting business people and then deliver that content to thousands of listeners. I was just getting used to being "the enemy of the people" when a new tag-line emerged that I am now part of "The Mob". It was THE talking point all last week. "45" uttered the words and "his people" picked it up, as if on cue, and parroted it over and over.

At several points in my life political leaders, with whom I had great differences in policy, would do something that reached out to America and united us. Today, that is gone. The policy of this administration is division. Winners and losers there is no "America"...there is "us" and "them".

But, There Is Hope 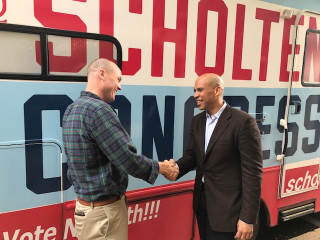 I didn't make the Fall Gala for the Iowa Democratic Party. But it, I understand, was great. Sen. Cory Booker (D-NJ) offered up some words of hope and encouragement. Was it just for that group of 1,100 party faithful or is there more to the story? That's one of the reasons I traveled to Boone, Iowa at the invite of the Boone County Democrats. Sen. Booker was traveling with Fourth District Candidate J.D. Scholten on the Sioux City Sue - that would be the Scholten campaign bus. I got there early before the 180 or so people arrived and filled a room that was probably meant to hold 75. There were farmers, business people, teachers, retired folks, young kids all coming together to hear a discussion about the farm crisis and how the consolidation of agriculture is strangling farmers and consumers.

Pretty boring stuff?  Not at all. The room was electric and each of the people who spoke offered, not a screed designed to cast the GOP as devils, but passionate words designed to motivate the people to be better than what we have been experiencing. I watched Cory Booker closely as he spoke and later stayed around to mingle with just about everybody who would approach him. He's the real deal...

I chatted with Matthew Klapper the senators Chief of Staff while Booker was mingling. "Look", he told me, "what you see is who he is and while it looks like he is sizing up a run for president that's not what he is doing here. He is listening and learning and trying to offer people hope in the face of some really awful times for so many. If he decides to run you, in Iowa, will be the first to know. Right now that's not on the agenda. But, let me tell you this, we have come to truly love the people of Iowa. This is my first trip here and you folks are amazing. Truly amazing..."

I'll take him at his word.

My friend John has been driving Democrats around the state for years. If I start naming the big names it would take up the rest of this post. Leave it at this: John has, no doubt, spent more windshield time with these high profile political visitors than anybody else in the state. As he was getting ready to leave Boone for the Quad Cities (that's a haul) with the senator he pulled me aside and said, "I gotta tell you this feels like 2007 when I was driving Obama around Iowa but, this is different. This guy is so much more approachable and likable it's really neat."  I'll take him at his word...

While I was in Boone I thought it might be a great opportunity to talk rural politics and so I sat down with Tim Winter who is running for the Iowa House in a massive district that encompasses part of Webster, Story and Boone counties along with all of Hamilton County. If you want to listen to that conversation here you go.

I also visited with farmer David Weaver who is running for the Iowa House from Boone County in District 47. If you listen you'll learn why he decided to run and it has everything to do with returning Iowa to a set of values that matter to the great majority of Iowans no matter the party.  Here is that conversation.

Which brings me to my long conversation last week (which will air this week on The Business News Hour) with Congressman John K. Delaney (D-MD). Congressman Delaney is the first announced candidate for president in 2020 so he gets to come to Iowa often. I met 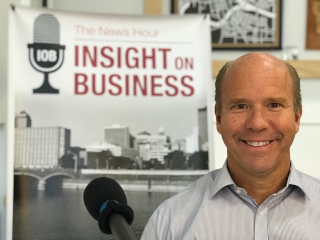 him a year ago and when he walked into the Mars Cafe in the East Village of Des Moines he reminded me of that. (Having a good memory, and  good staff, is really important.) I watched him deliver a great speech at the Polk County Steak Fry...in pouring rain...just a couple of weeks ago.

In the past ten years I've done several thousand extended interviews with established business people, authors, politicians, entrepreneurs and regular folks who are working "the grind" every day. Congressman Delaney and I visited for nearly an hour. One of the "knocks" about him is that he talks bipartisan efforts in this increasing toxic environment and I asked him about that. He said, "Look, people are tired of the fighting and the failure of accomplishing anything that benefits the American people. That's not how business gets done and that is no way to run a nation..."

The trend is clear. The effort is to tap into the frustration millions of Americans are experiencing as conditions erode and all we see is partisan bickering. However, when politicians like Sen. Charles Grassley (R-IA) look you in the eye and say that he is working in the best interests of the nation and Iowa and then does all he can to create a partisan Supreme Court...people take notice.

Once known as "The Newspaper Iowa Depends On" the Des Moines Register today endorsed all four Democrats running for the U.S. House of Representatives. The reason? "The GOP has failed to govern..." The Editorial Board of The Register goes into great detail of how congress has abdicated their power of checks and balance on everything from the trade war to disaster relief from health care to climate change...the list of failure by the Republicans is staggering and so, today, The Register endorsed Abby Finkenauer, Rep. Dave Loebsack (D-IA), Cindy Axne and J.D. Scholten. The paper pointed to the fact that each seems to be more interested in all the people than just the people of their own party. 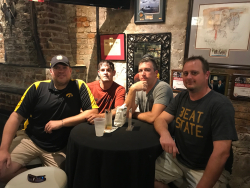 It's gong to be OK. Do you ever wonder if you've helped make a difference? Not a sea change but something that will last much longer but maybe not noticed by anybody outside of your family?  That happened to me yesterday. I'm sitting in the cold at my granddaughters softball game when I get a text with a photo from our son, Aaron (far left). He was in New Orleans for a wedding. It was this photo of he and three of his friends sitting at a table and the note said, "Wanna see something cool?"

The next picture that came across my phone was that of my Father z'tl (far left) sitting at a table with three of his friends at a place called the Court of Two Sisters in New Orleans.  A photo that was taken in 1943 as he was getting ready to get shipped off to WWII and the Pacific. The note said, "Same place!" 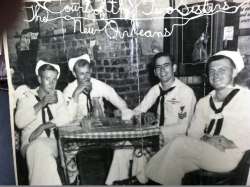 I had sent him that photo years ago and he kept it on his phone. When he knew he was headed there for
this wedding he looked through, what must be thousands of images, and found it. He and his buddies went searching for the exact spot where the original photo was taken 75 years earlier...and found it.

Of course we talked and he told me the story of wanting to sit where his grandfather once sat. I understand. I went on that same journey maybe 20 years ago...just to be in that same spot. It's, I guess, what we do.

Wonderful story, has meat on it and tastes good. I decided on Booker the minute he told that Senator who during the Kavanaugh hearings tthrearened Booker with expulsion “Bring it,” Booker replied after being threatened