Well, that was quite a week. Republican senators said that Dr. Christine Blasey Ford was "creditable" in her assertion that Judge Brett

Finally we now know what the real problem in America is! It is not that black men are disproportionately incarcerated and that black teens have an unemployment rate of near 20%. It is not that Latinos are paid less than their white or black fellow workers. It is not the fact that one in five women in the United States will be raped in their lifetime. It has nothing to do with the fact that 67% of women murdered by men are in an intimate relationship with their killer. None of that. The real issue that confronts us is that white men are victims.  Welcome to Sunday Morning Coffee...let's go.

No doubt you are feeling much more at ease now that the eleven men on the Judicial Committee have thrown off their oppression and pointed out who the real victims are. White men are under attack and it has come down to "45" and his minions to protect and defend them. To help them through their troubles and reassert their dominance in society. Just like Christians are under attack so too are white males. The next time you see a white male in public please...show a little more respect. Show some compassion for crying out loud. If not how can this nation survive?

Never mind that men are paid close to 20% more than female workers for the same job. The reason is clear: We are victims and it takes more of our hard-earned money to gain respect and dignity.

Word up: This is real and "45" has weaponized the idea of white male victim-hood and the base is responding in a major way. So much so that there is real doubt of any "blue wave" in November. Write that down someplace too. 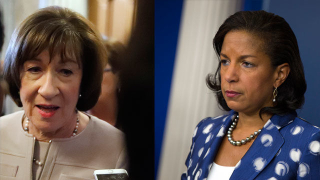 Just because I am interested I looked it up. There are more Democrats in Maine than Republicans.  Why does that matter?  Sen. Susan Collins (R-ME) offered a passionate speech from the floor of the U.S. Senate. For over 40 minutes she attempted to put her party and her gender aside and offer her support and compassion for Judge Kavanaugh. It was never in doubt. She watched and listened to women who told her amazing stories of abuse as dozens of women descended on her Washington D.C. office. She, mindful of a potential over-turning of Roe v. Wade, understood the women who told horror stories and sympathized with them. But in the end she sided with the real victim.  It wasn't long after her speech that Sen. Collins started to rack up some formidable opposition to her 2020 race. One of the most intriguing names floated is Ambassador Susan Rice. Whoever the yet-undetermined Democratic is he/she will hit the ground running with a war chest of more than $2.9 million.

The sums raised so far should make an impact in the 2020 election. Collins’ last opponent, Democrat Shenna Bellows, raised about $2.35 million total in 2014, according to the Center for Responsive Politics. Collins raised about $6.23 million in the same election. Meanwhile her office has cast the fund raising effort as a "bribery attempt". We'll see if the passion continues past the Saturday vote. 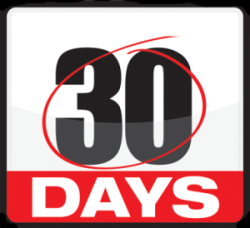 Democrats have thirty days to turn back decades of oppression aimed at the workers in Iowa a state where "right to work" really means right to steal. The right to steal your time and talent. The right to fire you for nonsense reasons. The right to impoverish generations of hard working Iowans. One of the first things Gov. Fred Hubbell and the new Democratic Iowa House should do is take on "right to work" and abolish this worker/slave act. Non-Right to Work states have higher incomes, lower poverty rates and fewer on-the-job worker injuries. It is time to put working families ahead of corporate profits.

Here is Iowa we can vote starting tomorrow. Early voting opens up here and if you've turned in a request for an absentee ballot the county auditor will be mailing those ballots out tomorrow.(Actually tomorrow is a federal holiday so no postal service.) You can then fill it out and mail it back or head into your county auditor office and vote there. Me? I requested a ballot the first week of September and I see, by tracking it, it is to be mailed tomorrow. I'm in. You?

BTW, don't let that link to the current Secretary of State's office get to you. Vote for Deidre DeJear...starting tomorrow. 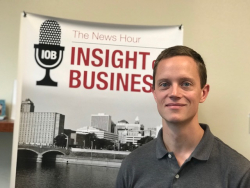 Down ballot races don't get much notice. However, democratic candidate for State Auditor, Rob Sand, is attempting to change that. He has visited all 99 counties and has done countless campaign appearances. He, last week did an interview on WHO Radio with Jeff Angelo and this week he is slated to go on the show of the realtor turned radio guy Simon Conway. That should be good. Meanwhile Rob has a message for Iowans about the mess that is the for-profit managed health care system here. Governor Kim Reynolds and the GOP will do everything they can to make sure he is defeated because he has promised to "Wake Up the Watchdog" and subpoena the records of the managed care companies who have been unable and unwilling to come clean with Iowa taxpayers. Make it happen. Rob will also be a guest on the Business News Hour this week. Watch our Facebook Page or Twitter @IOB_NewsHour for more. 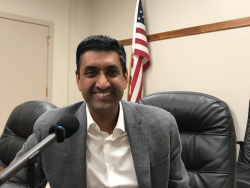 their minimum wage to $15 an hour. Congressman Khanna represents Silicon Valley and he teamed up with Sen. Bernie Sanders (I-VT) to put pressure on Jeff Bezos to, "do the right thing" and raise wages at a company that is work a trillion dollars. While investors didn't much like that (they never seem to be in favor of paying people because it detracts from the profit line) Amazon did raise the wage but, the very next day took back a benefit to "pay for the wage increase". If you are interested in that brief conversation here is the link to the interview.

Speaking of interviews that tend political...this week I'll visit with Congressman John Delaney (D-MD) about his presidential run and that should run on Wednesday. Congressman Delaney has an interesting story and was so very impressive in his speech last week to the Polk County Democrats. It will be great to visit with him about business and public policy.

I didn't make it to the Iowa Democratic Party Fall Gala last night and I'm kicking myself today. With everything going on I simply missed out. I understand Senator Cory Booker (D-NJ) hit it out of the park. We'll, no doubt, be seeing more of Senator Booker in the coming months. He's not hiding the fact he is eyeing a 2020 presidential bid.

It is going to be a crowded field.

Thanks for coming by and have a wonderful Sunday!