I'm about to do something that I've not done for...maybe since I started this political blog years ago...I'm going to have to pour just a

"taste" of Sunday Morning Coffee. Mostly personal: This Friday I was in Mason City doing services for Adas Israel, work that I've done for over thirty years, and then on Saturday I was there for over three hours teaching a class on Chanukah. Who knew so many people were so interested in the holiday? 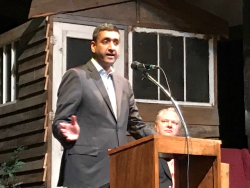 Then it was on to Jefferson, Iowa where I and another 14 media people were taken on a tour of a public/private partnership to train and bring high-tech jobs to that community of less than 6,000. I had been asked to join them through the office of Congressman Ro Khanna (D-CA) who was also there.

There some big names of technology pledged to be partners in this effort to build training and jobs for Rural America with Jefferson being the testing lab. Microsoft, LinkedIn, App Academy, Zukerberg's Bio Hub, Pillar Technology and many others. The even lasted into the evening.

Then there was a late celebration of Chanukah at home and bed.

Now, usually on Saturday night I work on The Business News Hour - Week in Review that airs today on News/Talk 1540 KXEL but... And now I have a blockbuster story to edit for airing later today.

So this morning I a very busy morning and I fear my only contribution to the political conversation over coffee this morning is this:

It looks as if "45" is in deep crap...and expect even more crazy stuff in the coming weeks.

Again, sorry to let you down today...but gotta get going.