Time to dash off a quick Sunday Morning Coffee and thanks much for coming by. Some of these stories you may have seen others,

The word is that Sen. Kamala Harris (D-CA) is off to the best start among those who have announced their candidacy for the 2020 presidential race. While she still trails former Vice President Joe Biden and Sen. 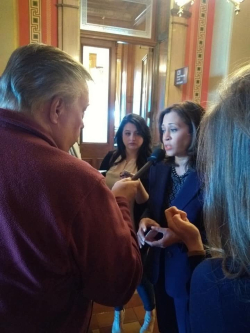 Bernie Sanders (I-VT) she has surged ahead of others who are currently in the race including Sen. Elizabeth Warren (D-Mass), Sen. Cory Booker (D-NJ), Sen. Amy Klobuchar (D-MN) and Sen. Kirsten Gillibrand (D-NY).

In a new poll out regarding likely Iowa caucus goers by Emerson College she trails only Biden.

Since announcing a White House bid last month on Martin Luther King Day, Harris has built on that momentum. She raised $1.5 million in the first 24 hours, drew an arena-sized crowd to her launch speech in Oakland and has generated enough media appearances — including a well-received CNN town hall— to keep her name at the epicenter of the 2020 conversation. Time...will...tell.

In typical style for the current occupant of the White House we now have a National Emergency which, of course, is totally made up. Even when saying it was a "national emergency" the president said he really didn't have to "do this". Oy... Our national nightmare just continues to roll on and on and on. But "45" did have time to squeeze in some golf right after declaring us all to be in harms way.

I was at a legislative forum yesterday when Iowa House Member, Marti Anderson (D-Des Moines) said, "What is it with boys and their toys?" She was talking about how the GOP dominated House seem to be fixated on stuff like guns and snowmobiles while hoping to break teachers, mess around with women's health and look the other way when dealing with anything that would start to actually improve the life of Iowans. It's a mystery but, time is running out. The next time a politician tells you that our greatest treasure are our older Iowans tell him/her they are simply lying. There is a crisis in health care in Iowa and it starts with a lousy Medicaid Reimbursement Rate. Today, in Iowa the average rate for nursing homes comes in at $159.70 a day. Sounds like a bunch but when you figure that the rack rate to stay at the Des Moines Downtown Marriott is $176 the Iowa Medicaid Reimbursement Rate is a joke. Remember, that $159.70 must pay for EVERYTHING from caregiver wages to meals, to therapy, social work...on and on and on.

But, at least at the Marriott  you get "free Wi-Fi".

Gosh, what if....we were to pay a LIVING Wage to people who care for people? Wouldn't that be amazing. Today the hourly rate for a Certified Nursing Assistant (CNA) is $11.96 an hour. That's $24,881 a year...before taxes.

Meanwhile this governor and this legislature and nearly every business group in the state is demanding more tax cuts so that "Iowa can be competitive".

I'm really sorry...you're only getting half-a-cup this week. I've got a meeting this morning at 8:30 and there is still snow to move off the driveway. Looking forward to visiting with the Governor of Montana over breakfast.

I had the chance to sit down with Congresswoman Cindy Axne (D-iA) yesterday and talk about several of her top issues. Watch for it later this week on The Business News Hour.

Today on News/Talk 1540 KXEL in the 1:00PM Hour I'll be chatting with Rick Smith of Citizens Climate Lobby about climate change and it's impact on business. And, yes...it streams.

See you at Soul Food Sunday?  No, really! It's a thing today at 2pm being held at University Church of God in Christ, 1639 East University in Des Moines. Saw it yesterday and thought it might be good to stop in.

Gotta go...sorry for the quick piece. Have a wonderful Sunday!