Trying to figure out what to blame this very late edition of Sunday Morning Coffee on...  I've got it.!  Independence Day! Yeah...a holiday in

the middle of the week tossed up everything. Actually my Bride and I were up late enjoying a perfect Iowa night.  So gotta blame this on...the weather.  Not to worry, it can handle it!

So many things to say about the efforts by "45" to embrace the military on the 4th of July. But let's just leave it at this. There are two reasons why the president spent your tax dollars to do his Salute to America honoring the very military that he dodged out of because of "bone spurs". 1) His base LOVES the military and the might. Just like they love the concentration camps that now are in every state in the union. It's all about power and might makes right. That is not to say others do not appreciate how the military protects and defends but with "45'" there is a deep desire to bow to his base...besides who might take him on for this.  It was a win/win for him. 2) He controls the military. That is the bottom line about this president...he loves controlling others. Be it the military, people he sues, his business deals or people seeking asylum from the horrors of their own nation. Control kids...control. 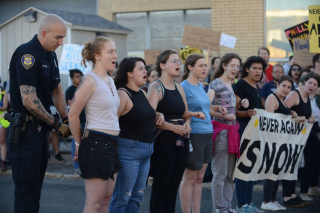 Last week while we, in Iowa, were watching or walking in parades hundreds of Jews descended on an immigrant concentration camp in Central Falls, Rhode Island and staged a peaceful protest. "Outside the Donald W. Wyatt detention center inmates can be heard from the street...banging on the windows and walls. The mass of people  protesting called out, 'We hear you!"

That was the scene as the Jewish group, Never Again is Now staged, along with others all over the country, peaceful protests against the abusive conditions for migrants and asylum seekers. Saying they could not stand by as the necessary ingredients for an American Holocaust emerge.

Liza Burkin a 30-year-old urban planner from Providence said, "I am Jewish, and I refuse to be a good German." She and 17 others were taken into police custody for refusing to move away from an entry zone for the detention center. As she was led away she said, "We are focused way too much on the end of the Holocaust and not as much on the beginning and this is directly comparable."

What we are doing with regard to migrants and asylum seekers is evil and it is costing the United States millions and millions of dollars. 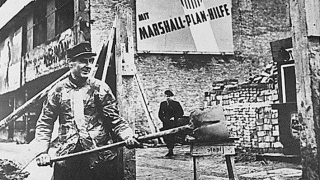 Much of that money going to private contractors who are in bed with "45" and his cronies. It is a scam of monumental proportions and we are fighting the wrong war. What this rich nation should be doing is invoking a Marshall Plan for Central America.

A little history: The Marshall Plan was an American initiative passed in 1948 to aid Western Europe in rebuilding their economies after World War II. The U.S. gave over $12 billion (roughly $100 billion in 2019 dollars) to help create the thriving economy that is now Europe.

Imagine, for a moment, if we took that road with Central America. If the United States really wants to shut down the flow of migrants and asylum seekers we need to look at the root cause for them coming here. It's economics kids. If only we had the guts to admit it. 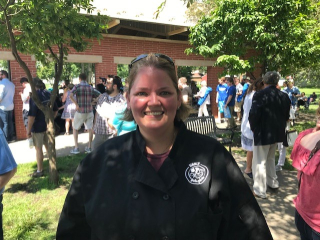 Months before the WDM Dems contracted with Hy-Vee, a chain of grocery stores based in West Des Moines, to handle the food. When it was exposed that Hy-Vee gave $25,000 to the Republican Party of Iowa Victor Dutchuk of the WDM Dems met with others and the decision was to move away from that agreement and find another source to handle the food prep and service. That is where Andrea Love and her business Dinner Delights came in. Spend just a minute with Andrea here: (Just click the audio link)

There are more than a couple of ways to resist and do good at the same time.

It was a heck of a week. Along with the West Des Moines Democrats picnic I helped out a fellow Democrat get to meet other Democrats in Central Iowa. Former Navy Admiral and Pennsylvania congressman Joe Sestak announced his candidacy for president just two weeks ago after learning that his daughter had, once again, beaten brain cancer. With no staff, or much knowledge of Iowa, he dove in and asked if I'd offer some help.  So, and while I'm not working for Joe, I felt it was important for people to get to know him. So we did the WDM Picnic and then he went on to march in the parade there. On the 4th I walked with him in the, very long and HOT, Urbandale Parade and then 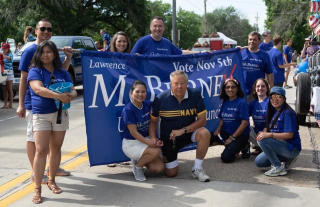 peeled off to do Windsor Heights Parade on behalf of the Windsor Heights Democrats. Did I do one selfe of any of that?  Nope! Oh my! But do want to thank my friend Dylan Funk for taking loads of shots on Wednesday during the WDM event.  Thank you my friend.

Then it was on to a great evening of music by Abby Normal at Nights in the Heights.  Yep, slept very well on Thursday night.

I was honored to have been asked to sit for a photo with a candidate for the Urbandale City Council Larry McBurney. Things are changing in Urbandale as Democrats compete in partisan and non-partisan elections. For many, many years Urbandale was considered a safe haven for the GOP. Not any longer and the same is happening in other communities as neighborhood groups associated with the Polk County Democrats continue to grow and become major activists. It's 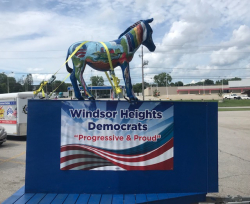 always about organizing. If you need proof...be in Ankeny this coming weekend.

Finally...it happened again. "Daisy" is a mascot of the Polk County Democrats and she has been making the rounds at various functions. My friend, Wendell Eck created a float for "Daisy" and she's been in several parades. A couple of weeks ago she fell from her perch and broke her leg. I picked her up the day before the Windsor Heights Parade...took her to the event. After the parade and on the way back to the staging area one of the straps that held her down came loose and...yes, "Daisy" fell once again.  So, it's back in the repair shop and finding a better way to anchor her.

And, yes, I feel lousy that it happened on my watch.