Like they say, "It ain't the heat, it's the humidity!" and we've got plenty of that this morning! Time for politics and religion the two things

that, more than others, impact our life and I get to share that each week here with Sunday Morning Coffee. So much going on...let's get started.

The petulant child that serves at the 45th president was at it again. On trips to Dayton and El Paso it wasn't about comfort and caring...it was all, and always is, about him. He whined when the public talked truth to power and commented about the photo of him and FLOTUS with a newly orphaned child giving "thumbs

up". He was angry when word got out that many who were injured in the shootings didn't want to see him. And after conciliatory remarks by the mayor of Dayton, Ohio he shot out an angry tweet that did not, in any way, resemble the comments by the mayor. Tired of winning yet? I am so very done with this guy...but that is nothing new. (Photo Credit - CNN)

Last week Immigration and Customs Enforcement (ICE) rounded up 680 workers at chicken processing plants in Mississippi. It was the largest single raid since the Agriprocessors raid in Postville, Iowa back in 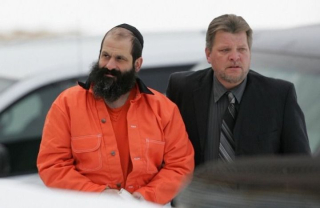 2008 where ICE arrested 400 workers. However, there seems to be a major difference. In Postville the Agriprocessors manager, Rabbi Shalom Rubashkin was also arrested, tried and spent time in prison. That ain't gonna happen in Mississippi. Why? Could it be because none of the owners or managers there appear to be Jewish?

It's unlikely that any of the people that actually hire undocumented workers will ever be charged in the Mississippi raid. It's just not done. How do we know? A study by Syracuse University looked at the number of prosecutions against employers and they found that from April 28 to March 29 of 2019 only 11 individuals, not companies, were prosecuted for hiring undocumented workers. At the same time during that period more than 120,000 undocumented immigrants were charged for illegal entry or illegal reentry.

Other than the fact that employers face little punishment when they hire undocumented workers what's the reason they do so? Simple: economics.

Undocumented workers can be paid less and employers know they won't complain so the "Chicken Gang" in Mississippi gets cheap labor from folks who are not going to complain and profits go up. Pretty simple... Sort of like Mississippi in 1859.

Dear disgruntled men and women who feel that the reason you can not get a piece of the pie because brown people are taking away your jobs. I happen to know of 680 open positions available...right now. You would have to relocate to Mississippi but I hear it's really pretty there.

It was a lousy week on Wall Street. But, what the hell do we care, most of us don't care seeing how we're not loaded down with "blue chips". However one segment of the market did well. Ready? Companies that manufacture guns did pretty well last week. They always do after a mass murder by domestic terrorists. The reason? Folks will buy more guns because they fear there will be restrictions. But, not to worry, that ain't gonna happen and the stocks will realign. See what you learn here?

Thoughts and Prayers vs. Action 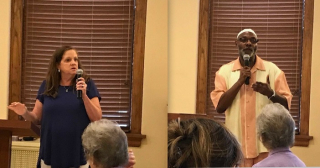 Last week I was invited to attend a gathering hosted by the Iowa Interfaith Alliance that was held at the First Christian Church in the Drake University area. I was a bit hesitant. What I didn't want to do was go to yet another gathering where we would hear words of comfort, sing a couple of songs, offer up prayer and leave feeling better about ourselves.

Imagine my surprise when the nearly 200 people did not meet in the sanctuary but in the social hall. It was standing room only as Connie Ryan from the Iowa Interfaith Alliance and Rep. Ako Abdul-Samad (D-Des Moines) led the group in creating several action plans to deal with gun violence in Iowa. It was refreshing. Some of the final points included:

It was time well spent. Now the challenge is to continue to mobilize and get stuff done. I know I signed up.

This weekend was the Annual Adel Sweetcorn Festival. Thousands of folks descended on the small town just west of Des Moines to take in 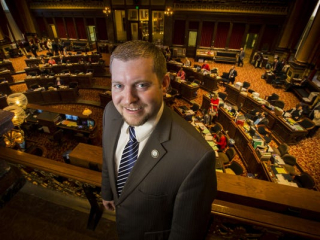 music, a huge parade and eat...sweetcorn. But one thing was missing. What Democrat in Senate District 10 will be willing to take on the pro-gun state senator there Sen. Jake Chapman (R-Adel). Who, just this past week, voiced his opposition to any sort of "red-flag" legislation where friends and family members can alert authorities about specific behaviors that might lead to gun violence. Ya know, sort of like the grandmother in Lubbock, Texas who alerted authorities about her grandson and the weapons he was collecting. They arrested him.

But, Jake doesn't want that sort of thing to come to Iowa. I figure it's time to "Shuck Chapman". I reached out to Bryce Smith the Chair of the Dallas County Democrats who told me there is an individual that is "considering" a run against Chapman.  I've just given you a campaign slogan.  You are welcome. (Photo Credit - Des Moines Register)

There was something very special that happened in Clear Lake, Iowa on Friday. Campaigns were in town for the Annual Democratic Wing Ding. Before the event Beto O'Rourke, who skipped the event to stay with his community in El Paso, asked Rep. Ako Abdul-Samad (D-Des Moines) to lead a moment of silence. Candidates and campaigns came together for this emotionally charged event. If you have not seen the video you must...here is a link to the Twitter account of Beto O'Rourke. They have pinned that video to the top of their page. But, promise to come back. 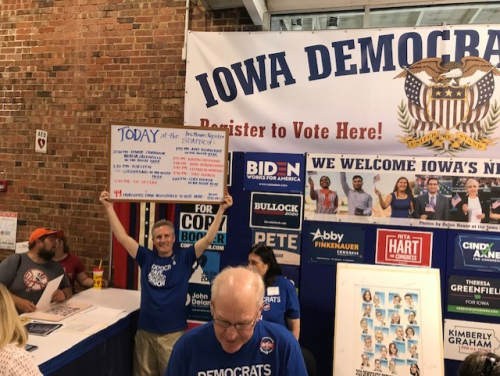 Varied Industries Building. Usually only a couple of folks show up, we're doing voter registration on some paper and talking up candidates in what was a pretty bland booth.

That has all changed. Dozens of volunteers sporting shirts saying, "Democrats Have 20/20 Vision" were signing up voters at a frenzied pace. The booth is a testimony of positive messages welcoming immigrants, people of color, people of diversity...people. It was a charged atmosphere.

I hear that the Iowa Democratic Party may just offer these shirts as a fund-raising opportunity in the near future. Stay tuned.

Time for working families to catch a break. If you are still with me let's talk, for a moment, about the horrible idea of "Right to Work" legislation. It's time that Iowa overturn what has become a baseball bat used against employees. The GOP does a great job in naming things to make you think something is in your benefit. Sort of like the "Jobs and Tax Cut Bill" that awarded the mighty with more money. The same is true of "Right to Work" it is not "just employment" it is one-sided employment. It means that you have zero rights in the workplace. It means that your boss can fire you for reason...or no reason at all. It limits your right to organize and it removes your opportunity to make more money.

I know there are more workers and employees than there are employers. It's time we end this hurtful policy and create a more even field moving forward. It once was common that employers held to three basic principals: 1) Profit, 2) Community and 3) Employees. We've seen what happens when companies focus on only one of those issues. It's time for real wins for families. That is something I'll work toward over the next year and I hope you'll join me.

Last week, during the Great Iowa State Fair, a lovely young lady by the name of Brianna stopped me in the Varied Industries Building and said, "My I ask you a question?" Being the sort of person who attempts to be helpful and open to folks I said I'd be happy to answer. She said, "Are you going to heaven?" I looked at her in the eye and answered calmly answered "Yes."

She said, "That is so wonderful that you have accepted Jesus Christ as your Lord and personal Savior!" My answer was, "Well, Brianna, I've not. I'm Jewish and we've got a slightly different take on that subject."

What ensued was a fifteen minute, rather respectful, conversation about the Torah her Bible and people of other faiths. While she accused me, and the Jews, of going against "The Word" and said Buddhists were idol worshipers and denied any knowledge of the Orah Torah or what exactly Isaiah was talking about when he railed against the Hellenized Jews of his day it was a fun interaction. We parted with a handshake and I wished her well as she worked the crowd trying to find "true believers".

Michael...another great column! Regarding the Adel Sweetcorn festival, good stuff calling out "gun lover" Republican State Senator jake Chapman and calling for a Democrat to oppose him in the election. And another thing about the festival...are you aware they quit cooking the sweetcorn early Sunday afternoon and just sold the shucked ears? Must have been Chapman...