It's the final day of the Iowa State Fair where, according to the count of corn kernels placed in mason jars outside the local NBC affiliate

the current occupant of the White House has an approval of 49.2%. Within striking distance of a lock on a second term. Just in case you've run out of stuff to worry about. Welcome to Sunday Morning Coffee! You know what we do here so...let's go!

Those are the words to describe the political news cycle. "45" and his gang of swamp-dwellers feed us so 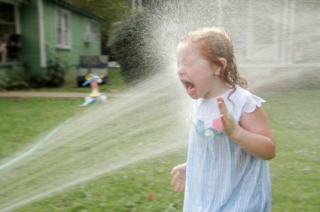 much crap that it's hard to keep up and make no mistake this is a thought out strategy. If you drown people in wacky stuff 24/7 enough people will believe some of the lies (just enough) and others will tune it out.

Already I've seen this among some pretty well informed people who have told me, "I'm out. The news is way to depressing. The lies and the hate and the trampling of the Office of President is more than I can take. I just don't watch, read or listen much anymore and my life is much happier."

Have you ever read "Mein Kampf"? Perhaps you should...it is a blue-print for much of what we see today.

Last week "45" traveled to Pennsylvania for, what was supposed to be, a major policy address on jobs. It was really just another campaign 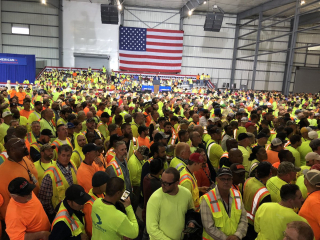 rally that more resembled the 1940 Rheinmetall-Borsig Works Speech where the then leader of Germany attacked everybody from the media to his political opponents and laid blame of the Second World War on the British. Oh...the lies.

Seems that workers at the Royal Dutch Shell petrochemical plant were told to show up and if they didn't attend they had to use paid time off or go without pay. A memo obtained by CNN from a worker laid out the issue. Of course Shell is denying that. The White House has no  comment but this is what was said by the Union: "This is just what Shell wanted to do, and we went along with it," Ken Broadbent, business manager for Steamfitters Local 449. (Photo Credit - Daily Sound)

So the guy who leads the party that has made every effort to strangle organized labor gets labor to say, "...we went along with it". Where is the guts?

BTW this plant does employ lots of people....and when they are finished with the construction the giant factory will turn out tons and tons of...wait for it...PLASTIC. Just exactly what we need.

Last week Gov. Kim Reynolds (R-IA), a day after she was at the Iowa State Fair touting wind energy, told the media that she needed time to gather together, "...stakeholders to take that information and then try to confirm or deny or whatever we need to do with it going forward.”

She was talking about the Madison County (Iowa) Board of Supervisors who swallowed, in total, the fraud sputed by "45" that windmills cause cancer. Earlier this year Reynolds declined to say that "45" was wrong. Meanwhile Sen. Charles Grassley (R-IA) said the president's statement was "idiotic".  Well, there is that. 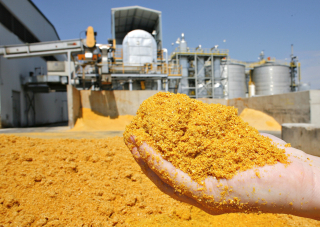 As you know farmers LOVE "45". They voted in massive numbers to elect the man who has been called the "most dishonest person ever to occupy the office" given his passion for lying about nearly everything. Now what is so interesting to watch is how this president has "played" our friends in agriculture. Just this week the administration more wavers to oil companies to avoid blending billions of gallons of ethanol into their products. (Photo Credit - Washington Examiner)

The wavers were to have been directed to small oil refineries however "45" and his cronies in the EPA have been granting massive numbers of exemptions to large companies which will contribute, even more, to the hollowing out of Rural Iowa. Farmers are already under pressure from the tit-for-tat trade war with China and by China finding other sources for communities. This is just another knife in the back. You can not trust...ONE WORD. 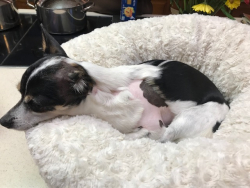 bill that would protect companion animals to come up for a vote in the Iowa Senate. Why does Chuck hate puppies? I dunno...maybe because his "minders" have some sort of twisted logic that dogs and cats are somehow tied to pigs and cattle? This is a photo of our rescue dog, Yofi, who had boiling water poured on her when she was just 8 weeks old. That's why no hair on one side of her body and a lack of an ear...yeah...that.

The GOP loves to use the "slippery slope" argument. You know, "If we allow the government to mandate seat-belts it's a slippery slope to other regulations that will cause  automakers to go out of business." Yeah...that logic. And I was there...from Detroit...remember?

It's this sort of "logic" that is so out of touch with the values of Iowans. Just like Jake Chapman (R-Adel) representing Senate District 10 out of Adel, Iowa who never met a gun he didn't love even though the vast amount of people in our state want to see some restrictions.

From hating puppies, education and working families to loving guns this crowd has got to go. They do not represent us.

I was at a couple of political events this past week. There was a fund-raiser with the Southeast Polk County Democrats in Waukee, the selection process of which 2020 hopeful to support going forward for the Asian Latino Coalition...Congratulations Sen. Kamala Harris (D-CA), the West Des Moines Democrats monthly meeting, the fund raiser for Congresswoman Cindy Axne (D-IA) the Clive Democrats monthly meeting, the Urbandale Democrats Fearless Fighter Women's Award Event and another presidential town hall last evening for 2020 hopeful Admiral Joe Sestak which was held at Fox Brewery in West Des Moines. 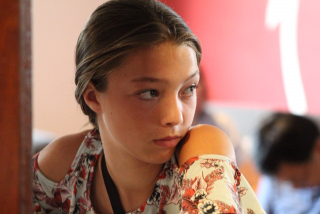 My friend Jerry Uhlman who travels to nearly every Democratic Event in Polk County took this photo of our eleven year-old granddaughter Jovie as she was listening to Admiral Sestak. She is not only a beautiful young lady her heart is also full of love. Thank you Jerry!

When people ask me why I would run for the Iowa State Senate and put myself out there...this is the reason. It is all about making sure families...all families...have a shot at a better life. If we, as a state, don't start to put families first we'll continue to see a decline in our our values. That has got to stop.

Thanks for reading and have a great Sunday and final day of the Iowa State Fair!