When? When will it be your family that is impacted by home-grown terrorists killing at random? When will there be leaders with spine who

will work to call an end to this carnage that is uniquely American? In Dayton, Ohio a terrorist killed 9 people and wounded 26 in less than a minute. Was this really what the framers of the Constitution wanted?  I think...not. It's a sobering Sunday Morning Coffee. And, if you're not up to bold ideas to fix what is wrong...move along. If you're as tired as I am...let's get started.

Doing Nothing About Terrorists

The government of the United States is complicit in the murder of hundreds of its citizens. Let's just call it like it is. While elected leaders on both sides of the political spectrum offer "thoughts and prayers" while Americans are being murdered by an increasing number of homegrown terrorists emboldened by the rhetoric coming from so many.

"There are good people on both sides." It's plain bullshit and you know it.

Consider this: After the Christchurch mosque shootings this year, legislation to restrict semi-automatic firearms and magazines with a capacity of more than 10 rounds, and provide an amnesty and buyback of such weapons was introduced and passed by the New Zealand parliament by 119 votes to one.  It took...six days to get that done.  Six...days. So the federal government is not able to stop the carnage. Then it is up to the states. I'm tired of the Iowa Republicans who take their social agenda and use it to pass laws that are in direct conflict to our Iowa values. It's time for new leadership at the Iowa Statehouse and the only way we'll see meaningful action is to oust the GOP from the Iowa House and the Iowa Senate. Then we can get to work on making Iowa a better and more fair and more safe place in which to live and work.  So, let's set the stage right here in Iowa.

Time to turn back the clock a bit. If the U.S. Congress is unwilling to work to protect us then it is up to each state to enact common sense laws regarding firearms. It can be done and, yes, it will be tough but enough is enough. We must appeal to the common sense of our citizens rather than the bought and paid for House and Senate Members that cow to their monied masters. 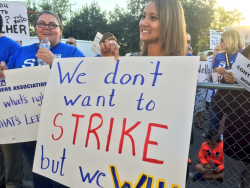 You may not be aware of it but Iowa is losing teachers and school administrators to Minnesota at an alarming rate. For years the Iowa GOP has said they value education but in the end starve school districts and make every attempt to make it harder for teachers to organize and demand better working conditions and wages. Teachers are headed to Minnesota because the pay is better and the union stronger.

Yesterday I was working with the Salvation Army asking Iowans to purchase pencils, paper, glue, notebooks and a raft of various school supplies because so many students have so little. One person said to me, "This is a tragedy, it is time that we reclaim our schools. The people must rise up because our future is in enhanced public education." He was right. It is time to oust the GOP House and Senate Members who continue to strangle public education.

Enough. Enough of propping up the for-profit companies that are failing to pay for and deliver medical care to Iowans who are on the Medicaid program. This debacle was created by one man and is being upheld by his lap-dog Gov. Kim Reynolds (R-IA). With a stroke of a pen former Governor Branstad (R-IA) created this mess and the Iowa Legislature has refused to rectify the situation even as more and more of your tax dollars go to propping up these organizations who are motivated not by creating a positive medical outcome but by creating profits for their company. We should all be ashamed. Just last month Governor Reynolds approved an 8.6% pay raise for these companies. Check your pay-stub. I'm sure you can point to that kind of raise last year...time to make some bold changes. 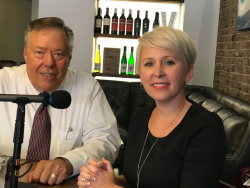 Over the past couple of years over $8 million of your tax dollars has gone to pay out settlements and legal bills that have involved members of the Iowa Republican Legislature and a former GOP governor. We can't find money to pay teachers but we damn well can find money to settle sexual harassment claims, wrongful terminations and claims of discrimination. When are Iowa voters going to find their spine and oust this group. Your opportunity is coming in 2020 after what will be yet another legislative session that will spoil our Iowa values.  Time to make some bold changes.(Photo with Kirsten Anderson who not only was awarded the first of many settlements by the State of Iowa she also switched parties to become a Democrat.) 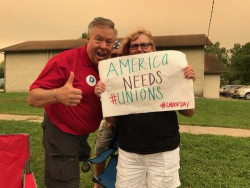 better working conditions. In Iowa if an employer doesn't like the color of your socks he/she can fire you without giving any reason at all. So, is that right? Is that right that all the power moves up the chain to employers. Once upon a time companies and corporations felt responsible to three segments of our society. 1) The community as a whole; 2) The workers who produced products and services that provided a profit to the company and 3) the shareholders who invested in the business potential. That three-legged stool is now a monopod and corporations and their CEO's are concerned with only investors and profit at the cost of employees and community. It's time to take action and repeal right to work.

The call from business interests is, "Let the market decide on wages." I get it but if the market is interested in profit above people and paying their corporate executives two to five hundred percent more of what is being paid to their employees something is wrong. Yes, we have seen burger joints being forced to raise their wages from $7.25 to now a whopping $10 an hour. If those folks work a full 40 hour week (which they do not) they will make $20,800 a year...before taxes. At that level they must work two or three jobs to earn enough not to be on public assistance. In the end food service, healthcare, retail corporations are taking the money you pay for what they are selling and then taking the tax dollars you are paying to prop up the working poor. I don't know what the right number is but this insanity has got to end. No more waiting for crumbs to fall from the masters table...because it ain't happening. We should be working to strengthen employee unions rather than undercut them. And that will take a change in the Iowa House and Senate. You up for it?

There you go...several policy ideas that will make Families First in the coming years. But you must act. You must show support for making a change, not only at the federal level but right here in Iowa. It starts with your school board to your city council to our legislative members and the governor. No more bowing and scraping before the GOP masters. It's time for bold ideas and change and that will, in the end, be up to you. 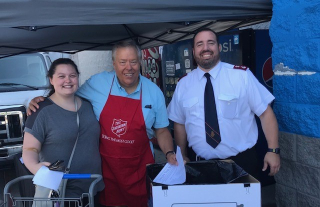 Yesterday I spent some time in Senate District 22 (Clive, West Des Moines and Windsor Heights) doing some work with the Salvation Army who were stationed at Walmart stores here in Polk County and in many locations around the nation. The goal was to collect donations of school supplies for kids that have none. From all reports it was a successful effort and I have my friend Tamyra Harrison to thank for getting me involved in the effort. I was moved by the words of Major Jason Poff who said, "This has more to do than just buying pencils. We're here to help kids who go to school look up rather than look down."  Part of my involvement was not only being there but also sharing the effort across several social media platforms...it's what I do.

So...why not have a day of action each week? What can I do to help. Let me know? You can find me on Facebook and while I can't be everywhere every week I want to be a servant to the people...folks who need the help. You can always hit me up on Facebook.

Finally, yesterday during my stint with the Salvation Army, a man walked up to us and began talking about his personal story. I wish we would have taped that so you could have heard...but here is a short piece I recorded with Salvation Army Major Jason Poff about the addiction recovery centers sponsored by his organization. To listen in, just click on the link below.

Thanks for reading and have a great Sunday...but don't get too comfortable, we've got work to do.