Welcome to Sunday Morning Coffee my weekly look at the political news stories you, no doubt, have seen or, perhaps missed all laced with

my commentary. My name is Michael libbie and I think I've been at this for well over twelve years.  Why? I dunno...because I don't have much else to do before the sun comes up on Sunday?  Enjoy and let's go...

A week after "45" said he "dis-invited" the Taliban for tea at Camp David the United States conducted airstrikes that killed two senior leaders of the group along with about 40 followers. The president did say that the talks were "dead" but had no idea just how...dead.

Coming To Take Your AK

Well, THAT was a moment! Last week when Beto O'Rourke said during the Democratic Debate that "Hell yes, we're going to take your AR-15 your AK-47!" it caught many by surprise. Of course my friends who fondle their AR-15's on a daily basis...or at least peek in on them from time to time...were outraged. According to the National Rifle Association there are 8.5 to 15 million assault weapons in the U.S. 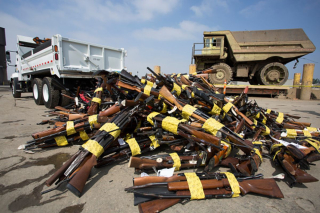 The math is sorta fuzzy because of the trying to figure out what an assault weapon is. Back in 1994 there was a law that said they could not be manufactured in the United States. That ban expired in 2004 and it was not renewed under the George W. Bush administration.

Beto doesn't want to just ban manufacture but to have folks sell their weapons to the Bureau of Alcohol, Tobacco Firearms and Explosives. (All four items that can kill you...no wonder there is a "bureau"...right?) Of course none of this is going to happen. We are not quite as civilized as our friends in Australia where this was done after ONE mass shooting way back in 1996 and the result was that over 700,000 banned weapons were turned over. In 2002 Australia further tightened their gun laws by restricting the caliber, barrel length and capacity for sport shooting handguns.

And...fewer people were killed.  But hey...this is America and we have every right to murder each other because we're America and that is what America does. So...there Beto.  Weary.....

Pull Your Pants Up! Just when you thought it was safe.  The New York Times has reported a new allegation that, now, Supreme Court Justice Bret Kavanaugh "exposed himself and pressed his genitals against a woman without her consent".  A male friend of Justice Kavanaugh reported this to the FBI but the bureau didn't investigate. Meanwhile the "Fondler and Chief" this morning tweeted, "Now the Radical Left Democrats and their Partner, the LameStream Media, are after Brett Kavanaugh again, talking loudly of their favorite word, impeachment. He is an innocent man who has been treated HORRIBLY. Such lies about him. They want to scare him into turning Liberal!"

Really? Guys pulling down their pants and pressing their genitals against women? That is so gross...I thought the prefered method was, as articulated by "45", is to "Grab (women) by the p...y!" Because "They love it when you do that...."

We hear a bunch about mental health. "45" says it's why folks commit mass murders. We are told it's what is behind child abductions. We are informed that it is mental health that is the culprit responsible for domestic abuse. Everybody from politicians to the person propped up at the bar blames mental health for a litany of social and criminal activity.

So, if that is the case...and I'm not suggesting that it isn't...why does Iowa rank so poorly when it comes to the care and treatment of mental health issues? Oh, you didn't know?  That's right my Cy-Hawk friends. Iowa ranks 45th worst in the nation. But, I was informed last week "We've gotten better."  Oh, so like a couple of years ago we ranked...what...47th worst state in the nation?

How is this possible? I am so glad you asked. It is possible because of the screwed up funding formula Iowa uses to care for our mental health problems. It is a bizarre formula that ties mental health funding to property taxes and caps the funding at $49.28 and allows some counties to pay less and some more. It's such a convoluted mess that it's going to take more time than I have here to explain it and then offer a solution.

So...look for my mental health care funding proposal coming out later this week. We've got to do more than "talk about it" my friends. You deserve better than simply saying "I'm for improved mental health care." Details kids...details. 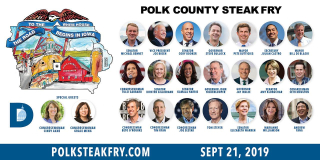 Yesterday I attended the regular monthly meeting for the Polk County Democratic Leadership Group...it's a gathering of chairs and co-chairs of the many area neighborhood groups in the county. And, just about every community and neighborhood has one. To learn more about them, go here.

Anyway Polk County Dem Chair Sean Bagniewski reported that over 10,000 tickets to the Annual Polk County Streak Fry had been sold and that many of the presidential campaigns who are coming will hold massive "marches" into the event space at Water Works Park in Des Moines. WHAT? YOU haven't yet gotten your ticket?  Horrors!  This will be something to see and you can purchase your Steak Fry ticket here.  See you there on Saturday the 21st! 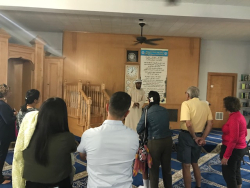 Yesterday I went to Masjid an-Noor a mosque located on 42nd Street in Des Moines. It wasn't my first time there but, as always, I came away with a better understanding of Islam and how similar my faith...and perhaps yours...may be to others. The event, Meet My Religious Neighbor, was coordinated by the Des Moines Area Religious Council and the next opportunity will be on Monday, October 28th at a Baha'i Festival.  See what you learn here?

Today at 2pm Michael Bornstein, one of the youngest survivors of the Holocaust and author of the book, "Survivors Club: THe True Story of a Very Young Prisoner of Auschwitz" will speak at the Staplin Performing Arts Center at Valley High School in West Des Moines and then tomorrow (Monday) at the Ames Middle School at 7:00PM.

Our daughter-in-law Mandi Libbie had a birthday yesterday and to mark that event there was a football game in Ames. It was really nice that so many folks could get together for the celebration!