Welcome to Sunday Morning Coffee my weekly piece on some of the political stories you may have seen, or missed, and laced with my

commentary. Heads up, this is going to be a shorter cup...I have two events to cover today. One is the youth forum at a local high school with several presidential candidates and the other is a health care conversation with Bernie Sanders. Hey, always working and learning it would seem.

The President of the United States

We all know "45" is dirty and I'm not going to spend a bunch of time on him. It's enough to say this is the most corrupt person, next to Andrew Johnson, to ever become president. It is a shame and disgrace that this person is the leader of our great nation. We've never seen anything like it and, hopefully, never will again. In an interview, just yesterday, I was asked what I thought were the two most pressing issues that we need to address. I said that health care and repairing our standing on the world stage are critical for moving forward. One addresses the root cause for financial ruin and the other addresses how this president has trashed our reputation world-wide. 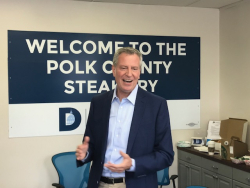 I may have been the only person on the planet to have been dismayed that Mayor de Blasio pulled out of the 2020 race. I met him twice over the past several months and enjoyed the conversation and the interviews. I also know how much the NYC media hate him. Saw it first hand when they lied about an event he was at in Des Moines and listened to them "bad-mouth" the mayor when the microphones were off. I remember I asked the reporter about it and she said, "It's what we do in New York."  Anyway, the Polk County Steak Fry had one less candidate speaking yesterday.

It was a big deal. A really big deal that took organizers months of work to pull off. That a county party could put together an event with 16 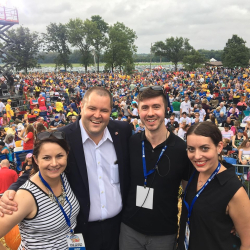 presidential candidates and feed nearly 12,000 people was extraordinary. An army of Democrats volunteered to do everything from parking cars to serving the food, to cleaning up the tables, to transporting people around Water Works Park. It was a tremendous success. The folks in this photo Judy Downs, Sean Bagniewski, Peter Crane and Lindsay Paulson were the leadership team for the event and they were joined by hundreds more. It was a true team effort. This was the third year since the Polk County Democrats resurrected the Tom Harkin Steak Fry and it was truly the best yet. Thank you to everyone who worked their ass off to make this happen. People will talk about it for...at least a year...right?

Is on life support. Today, in an exclusive interview with Peggy Huppert of NAMI-Iowa you'll learn how under funded and convoluted our mental health care system really is. While we blame everything from mass shootings to domestic abuse on mental health wouldn't you think we might seriously start to properly fund and pay for mental health care?  One would think. The 24 minutes conversation will air in on News/Talk 1540 KXEL this afternoon at about 2:35PM Central. You can hear it by going to www.KXEL.com or, if you have a smart speaker, "Hey, Google/Alexa, play KXEL Radio!".  If you miss it you'll be able to catch it this week on my newscast, "Insight on Business the News Hour".  This really is an important issue and serves as the basis for my policy on mental health in Iowa.

After several weeks of push polling former gubernatorial candidate and former state senator Jack Hatch has entered the race for Mayor of Des Moines. Clearly well funded, Jack has the backing of some very influential brothers, Mitch Henry and Joe Henry. I saw Mitch working the Jack Hatch Booth at the Polk County Steak Fry yesterday...in full campaign mode. I'm not sure Mayor Frank Cownie has faced this serious a challenge in the past. I know and like both of these guys and I think...based on the funding alone...Hatch might just pull this off. His campaign video was well done, his social media is excellent and he is a known person. Stay tuned. Told you this would be short today...I was pleased to have the opportunity to volunteer for the Polk County Steak Fry yesterday. In past years I was there to cover the event. This time it was all about taking a cue from my fellow Polk County Democrats and getting involved by helping out. Did two hours in the massive food tent cleaning up plates and tables, taking trash away and re-setting chairs for the next wave of guests. It was done under the watchful eye of Suzette "Don't Throw The Steak Knives Away" Jensen. Thank you for everything! Then a bit of talking to voters and mentors. Had a great conversation with my friend former Governor and Secretary of Agriculture Tom Vilsack...who told me his bride Christie also enjoyed "call time". I know...we're odd.  Thanks for the tips. of seats. An interview with Cenk Uygur of The Young Turks about Iowa and my senate race, a brief conversation with Sen. Cory Booker (D-NJ) and Sen. Chris Coons (D-DE). Then my friend, and I believe I can call him that, John Bessler and I had a great conversation about friends, family and (of course) his wife Sen. Amy Klobuchar (D-MN). Iowa Democratic Chair Troy Price gave me a few minutes to explain the approval of the DNC to the supplemental caucus location plan for 2020. That also will be heard, first, today on News/Talk 1540 KXEL in the 2pm hour. I also learned that my friend Cal Woods is the latest entry into the 2020 race for U.S. Senate...that makes five folks...and he'll also be on with me in the near future.

Then, as I was about to leave, Scott Thompson said he was short drivers for the golf carts that shuttled folks from the event to their cars or waiting busses. I asked for a key and he flung one at me. So, in the closing hours of the event I was able to meet a ton of people who appreciated the 2.3 mile ride to their vehicles or the front gate so they could call a Lyft.

I'd do it all again. What a wonderful time...it will be long remembered for the hundreds of volunteers who made it so. Thank you all!

Gotta GO!  Thanks for reading and have a great Sunday!