I wish I could become a Republican and look at the world as if everything was just fine...except my faith, values and reality tend to get in

the way. Our nation is in serious trouble...you know it is true. We have a monster in the White House and his pals across the GOP spectrum fail to have the guts to call him out. Meanwhile his supporters, maybe you know some, have doubled down on what is indefensible. Let's get started with Sunday Morning Coffee.

Murder in Fort Worth

While you were sleeping a police officer in Fort Worth, Texas was investigating a "courtesy call" because a 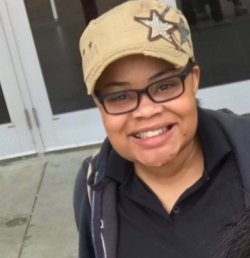 person called 911 to report that a door was left partly open. The officer walked the perimeter of the home, it seems without announcing he was the police, and in just minutes shot through a window of the house and killed a mother who was in the room with her child. The officer, who joined the force in 2018 has been placed on leave and the Mayor there has said there will be a full investigation. And, yes it was in a Black Neighborhood and the officer is White. Details are still emerging. But the question remains....if you are a person of color do you dare call the police...for anything? Her name: Atatiana Jefferson

Last week "45" lost his mind, or what is left of it, at a rally in Minneapolis where he spewed vitriol attacking anybody that fails to fawn over him. Targets were the press, congress, the mayor, members of congress...you know the drill. While watching him one cannot make a direct comparison to the speeches in Berlin where that nation's Fuhrer would attack everybody who did not fawn over him. The similarities are too striking to avoid. Frankly, I don't care who the Democratic nominee is...he or she...will see an outpouring of support. It's got to happen. I was up this morning before 5:30 doing some work. But, before I dived in I spent thirty minutes checking the news stories. What I saw coming out of Syria was horrific. Turkish backed forces executing Kurds along the highways. Mothers holding lifeless children who have died in the bombing. ISIS prisoners rushing out of jails and back to work against...us.  Meanwhile the architect of all this was golfing. This is his handiwork. This is on him. That his minions remain silent is yet another indictment of those of you who place an "R" next to your name. You are complicit in this horror. You...who still support this monster...you. That those of you who call yourselves faithful servants of Jesus can stand in silence while this goes on belies your true outpouring of your religion. I cannot comprehend this...there are no words.

And, in case you've forgotten it was the Kurds who worked with and fought against ISIS with U.S. troops. This is how we treat our allies. 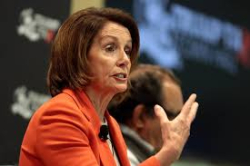 The word is out that the most powerful woman in the United States is headed to Des Moines. House Speaker Nancy Pelosi will be taking questions to what is shaping up to be a sold-out event being put on by the Polk County, Iowa Democrats. Titled "A Conversation with Nancy Pelosi" should get the Values Voters all churned up.  Why? Just last night "45" told his fawning crowd of evangelicals that he might sue Congressman Schiff and Speaker Nancy Pelosi because they are "very bad, very bad people".

If you would like to attend the Conversation with Nancy Pelosi you can get tickets here.

The game has been played for a very long time. We all know that in Iowa our city and school board elections are supposed to be non-partisan. The idea is that everybody is going to work for the goodness of their community. The exception has been...for years...that the GOP has used these elections to groom their candidates for partisan politics and they have been very, very successful.

Guess what? The Democrats are now openly supporting those candidates in city and school board elections that share Democratic Values of equality, fairness and local control. Here in Polk County the Polk County Democrats have been spending money to get out the November vote and have assisted in mailing items to those voters who are registered as Democrats but may not have voted in past local elections.

I get to live in the "Village of Windsor Heights" and in keeping within the spirit of disclosure you might want to know where the three candidates are with respect to their voting records: 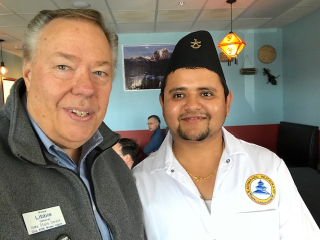 I was out knocking doors and visiting with voters in Senate District 22 yesterday when I stopped into the newest restaurant in Windsor Heights, Kathmandu. My friend Thakur Neupane opened the restaurant just 5 days ago and judging by the crowd that was there it's going to be a hit. I had the Lunch Buffet...because it's fun to try different things. YUM!  Thakur also has Kathmandu on S.E. 14th Street in Des Moines that, while smaller, has the same vibe and great food. So...go already!

Today, at nightfall, begins the Jewish Festival of Sukkot. You may know it as the "Festival of Booths". Observant Jews "move into" these temporary dwellings for the eight day holiday. Some of us may not "move in" but will take our meals there. It's all a reminder of the wanderings, the harvest and tends to put us closer to nature and...besides we're told to do so in the Torah.  You can look it up: Lev. 23: 42-43. Building the Sukkah isn't such an easy task but enjoying it...truly is.

Last week I did an in depth interview with Des Moines Mayor Candidate Jack Hatch. We had lots and lots to talk about. In the past I've interviewed the current mayor Frank Cownie. If you follow Insight on Business the News Hour next week you'll be able to catch the Hatch

If you would like to take a peek at my campaign website...and perhaps donate to the effort...here you go: LibbleForIowa.com is where you'll see some of the issues we need to address as I take on one of the architects of the GOP effort to destroy working Iowa families. Time to "Chuck Chuck".

Thanks for reading and...it's yet another weekend for softball around here. Enjoy your Sunday!

I really like what you say and believe. While I can't vote for you, maybe I can doorknock for you. (Sorry ... too poor to send money.)

Thank you George...you have ALWAYS been a friend. Let's plan on it as we get closer? Appreciated!