seven days. It's difficult and disturbing and I am simply amazed at how some, like lemmings, choose to follow "45" into the chaos. I truly don't get it and, perhaps, never will. On that happy note let's get started, Sunday Morning Coffee is served... 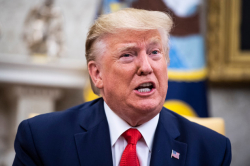 "Hey, Mick! I've got this great idea! Actually, I had it when I was over in some county this year where lots of other very rich people had a meeting. You all know that it's not been an easy road for me. I've lost millions, haven't paid taxes for decades, made up stories about how wealthy I am so I could get more loans...it's what I do. Anyway, things down in Florida haven't gone so well. No, not Mar a Lago, that other shithole joint The Doral. Been losing tons of cash. So, why not throw that G-String, you get what I'm sayin' Mick, party down at my place near Miami?  Hell, I won't have to spend a dime! We'll let those suckers from those other shithole countries pony up their cash. Can you see it Mick? We'll have all kinds of publicity. There will be babes, plenty of babes. I'm tellin' ya Mick it's a winner. It's beautiful. Now, get yourself out there and let the world know we're on top of things. Love ya Mick!"

Something tells me that can't be far from the truth...

Rick Perry Runs Out of Energy

No, really. Energy Secretary Rick Perry isn't tired he literally ran out of his office trying to escape his involvement in that whole messy

Ukraine deal. Of course Mr. Perry said all of this has nothing at all to do with the "Three Amigo" dealings and the congressional subpoena he ignored. Seems that Rick couldn't overcome the fact that his boss threw him under the bus two weeks ago when "45" blamed the Ukraine phone call on him.

This "Draining the Swamp" takes time my friends... 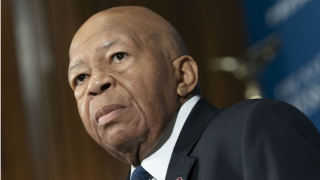 This was a tough week for many of us who looked on the life of Congressman Elijah Cummings (D-MD) as heroic. His voice, his faith his spirit are now a memory. Born in poverty he ascended to the halls of power never forgetting his commitment to those who have little. Little power, little money, little justice...little.

He took the wrath of "45" all summer long as the president described the African-American Cummings as “racist” and “a brutal bully,” charging that he “has done a very poor job” representing his constituents and “has failed badly!”

"45" also characterized Cummings’ predominantly black, Baltimore-based congressional district as “a disgusting, rat and rodent infested mess” where “no human being” would want to live.

Some Americans reviere class and dignity. Others...not so much.

It was a trifecta of love. Last week, according to the Des Moines Register, about 100 people gathered to hear Sen. Joni Ernst (R-IA), Gov. Kim Reynolds (R-IA) and Iowa GOP Chair Jeff Kaufmann heap praise on "45". The governor said, "He really pays attention to Iowa and listens." Then the two women recalled their personal trauma. One dealing with an abusive relationship and the other about the abuse of alcohol. It would seem that two, out of the three story lines, might actually be true. Jeff was there for support.

Speaking of Sen. Ernst...the reports are in and Democratic Candidate Teresa Greenfield out raised Joni in the money department.

It's History Damn It! 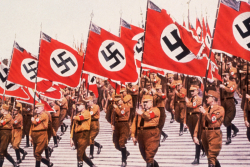 Last week Democratic Candidate for the U.S. Senate Eddie Mauro wrote a letter to Gary Slater who is the manager of the Iowa State Fair, and from Missouri, asking if it was appropriate that the Fair Board rents out the grounds for a gun show where folks can buy armor piercing bullets, ammonium nitrate (bomb making stuff) Nazi flags and other fun SS gear.

Mr. Slater basically responded, "It our damn land we'll do what the hell we want to do with who we want to do business with!" Or, something like that.

Many of my white Christian friends looked at the story and passed it all off as "Hey, it's history! Don't you libs get it? We're just remembering history!"

Yeah, with bomb making stuff, illegal bullets and a nod to that wonderful time period when other white Christians murdered millions of Jews because they were...inferior.

I totally get it.

By the way...if you can see through your hood...I'd recommend this book. It's how "history" treated some families and how, at age four, Michael Bornstein survived. "Survivors Club - The True Story of a Very Young Prisoner of Auschwitz". And you can listen to part of his story here.

It's starting to smell. Last week we experienced the non-political reality of how divided our world is as the entire RAGBRAI crew of 16 people quit and formed a new bicycle ride across Iowa.  The new ride just so happens to take place during the same week at RAGBRAI 2020.

It was all wrapped in how the long-time RAGBRAI director T.J. Juskiewicz didn't like to be "throttled" with regard to the saga of Carson King. He said that the "RAGBRAI Nation" wanted to know if the ride supported the outing of King who made some racist comments  when King was 16 years old and that Gannet, the parent company of the Des Moines Register, kept him from speaking his mind.

So, Juskiewicz quit and on the same day announced the new ride complete with a website, registration information and more.

Now the bicycle community is "divided" on which ride to...ride.

Clearly there is more to this story than a guy being told, by his employer, to stick to the script. And, it's easy to hate the Register and even easier to hate Gannett and the bean-counters who have ruined journalism. So, why not start a new  paper? If you want a more POINTED read about this mess check out Mike Draper's Blog from Raygun titled, "How To Destroy a Community in Three Easy Steps". I like...Mike.

We're winding down the festival of Sukkot which ends tonight at sundown. They, we Jews, launch into the holiday of Shemini Atzeret or an "extra day" and then Simchat Torah...the rejoicing of the Torah...as we start reading the five books again from the beginning. It's what we do... 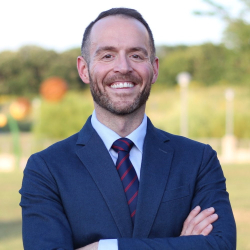 Yesterday I was out knocking on doors for both my campaign as well as helping out my friend Ryan Crane who is running for the West Des Moines City Council for an at-large position. Ryan will make an excellent City Councilman...no, really. He is passionate about his community and dedicated to progressive values and economic development for everybody.

What is astounding are the number of people whom I spoke with who have NO idea there is an election on November 5th much less who the candidates are. Over the next several days I'm joining others in The Great Ballot Chase as we call voters across Polk County encouraging them to vote early and/or get them to request an absentee ballot. If we all work at it we can make a huge difference.

HERE is a LINK to the Polk County Democrats to help you...VOTE!

And, I made new friends. Knocking doors is an amazing experience. 99.9% of the  people I engaged yesterday were delightful. Thanks for opening up your doors and having a conversation about...values. It all matters.

Congresswoman Nancy Pelosi (D-CA) is in town this week. Here is a link for tickets!

BTW the Great Pet Expo is today...just in case you were wondering.

Thanks for reading and have a fantastic Sunday!